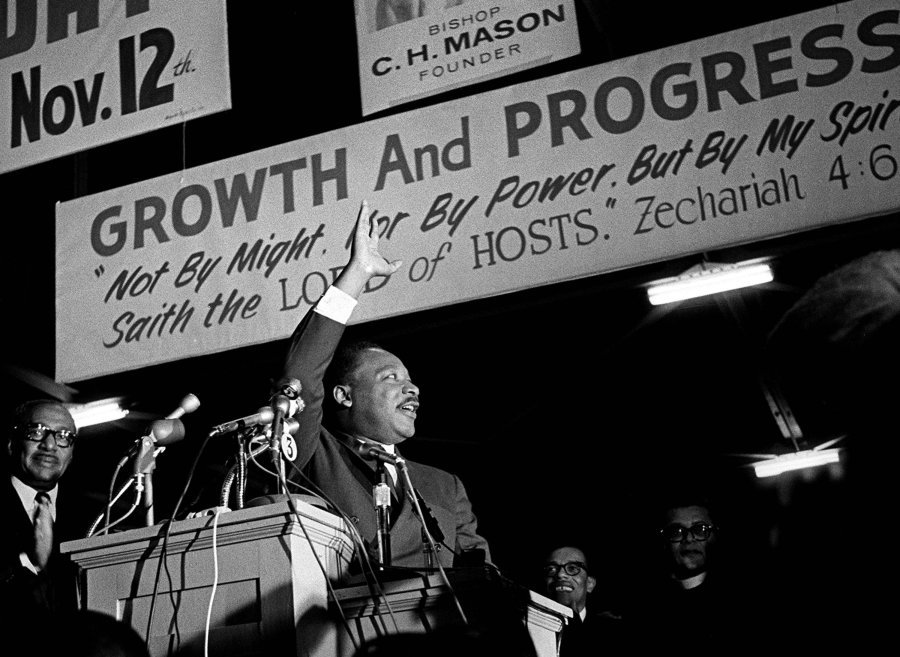 On Monday, January 17, the nation will pause to honor the life of the late Reverend Dr. Martin Luther King Jr. The only Black American to be honored with a national holiday, many will recall his historic civil-rights achievements.

But Dr. King also stood as a tireless champion for economic justice. His last public speech, delivered a day before his 1968 assassination, was before a Memphis audience in support of a lengthy strike for fair wages among its largely Black sanitation workers. That prophetic oration often referred to as his “Mountaintop” speech, also noted the city’s economic disparities.

“It’s all right to talk about ‘long white robes over yonder,’ in all of its symbolism,” said Dr. King. “But ultimately people want some suits and dresses and shoes to wear down here! It’s all right to talk about ‘streets flowing with milk and honey,’ but God has commanded us to be concerned about the slums down here, and his children who can’t eat three square meals a day.”

When Dr. King moved his family into the city’s (Chicago) Lawndale neighborhood, he described it as “an island of poverty in the midst of an ocean of plenty.”

“Chicago boasted the highest per capita income of any city in the world, but you would never believe it looking out of the windows of my apartment in the slums of Lawndale,” said Dr. King.

“My neighbors paid more rent in the substandard slums of Lawndale than the whites paid for modern apartments in the suburbs. The situation was much the same for consumer goods, purchase prices of homes, and a variety of other services.”

For example, the King family paid $94 per month for four run-down, shabby rooms. During the campaign’s open housing marches on Gage Park and other predominantly white places, new and larger apartment dwellers paid only $78 a month for five rooms.

Fast forward to today and the cost of rental housing remains a challenge for millions of families [RP6]. The average fair market price for a two-bedroom apartment is $1,295 per month. Yet the highest rent affordable to an average full-time worker is $977, according to the National Low Income Housing Coalition (NLIHC). Its recent report entitled “Out of Reach” ex- poses the mismatch between wages people earn and the price of decent rental housing in every state, metropolitan area, and county in the U.S.

Over 7.5 million extremely low-income renters are severely housing cost-burdened, finds the report, spending more than half of their incomes on housing. On average, someone who works 40 hours per week all year round must earn $24.90 per hour to afford a modest two-bedroom home without becoming housing cost-burdened. The average renter’s hourly wage is just $18.78 per hour, however, and minimum-wage workers earn even less.

In 2019, prospective buyers of a median-priced home of $321,500 needed to save 11 years to accumulate a 5 percent down payment of $26,000 on that home, found the Center for Responsible Lending (CRL) in its independent and recent report. But buyers seeking the least costly loans, conventional mortgages, needed a 20 percent down payment of $64,300 plus another $9,663 for closing costs.

“There is a huge disconnect be- tween our collective view of America as the land of opportunity and this data, which show renters face a steep climb in saving for homeownership,” said CRL researcher and report author Christelle Bamona. “This climb is especially steep for Black and Latino Americans, essential workers, and people weighed down by student debt.”National Association of Real Estate Broker

The National Association of Real Estate Brokers (NAREB) underscores CRL’s findings. Its 2021 research, the State of Housing in Black America: Emerging from the Pandemic Recession (SHIBA) found that although homeownership generates the largest part of building household wealth, fewer than 45 percent of Black households own their homes, compared to nearly 75 percent of whites. Further, Black homeowners captured only $198 million in savings from the Federal Reserve’s lowering of interest rates during COVID. Nationwide, the savings due to this policy change totaled $5.8 billion.

For example, mortgage pricing, and under-appraisal of home values are examples of how the growth of Black homeownership and, in turn, wealth is systematically suppressed. Since 2019, the rate of mortgage loan denials to Blacks (16 percent) has consistently been double that of whites (7 percent).

While access to mortgage credit remains a central housing issue, housing affordability has worsened for a record 117 months of year-over-year increases, according to the National Association of Realtors (NAR). The November 2021 median price of existing homes was $353,900, up 13.9 percent from November 2020 ($310,800).

Today the quest for economic in- justice continues. Just a few weeks before Dr. King’s assassination, his prophetic voice remains as timely as it is timeless:

“Do you know that most of the poor people in our country are working every day? They are making wages so low that they cannot begin to function in the mainstream of the economic life of our nation. These are facts that must be seen. And it is criminal to have people working on a full-time basis and a full-time job getting part-time income.”

Charlene Crowell is a senior fellow with the Center for Responsible Lending. She can be reached at [email protected].