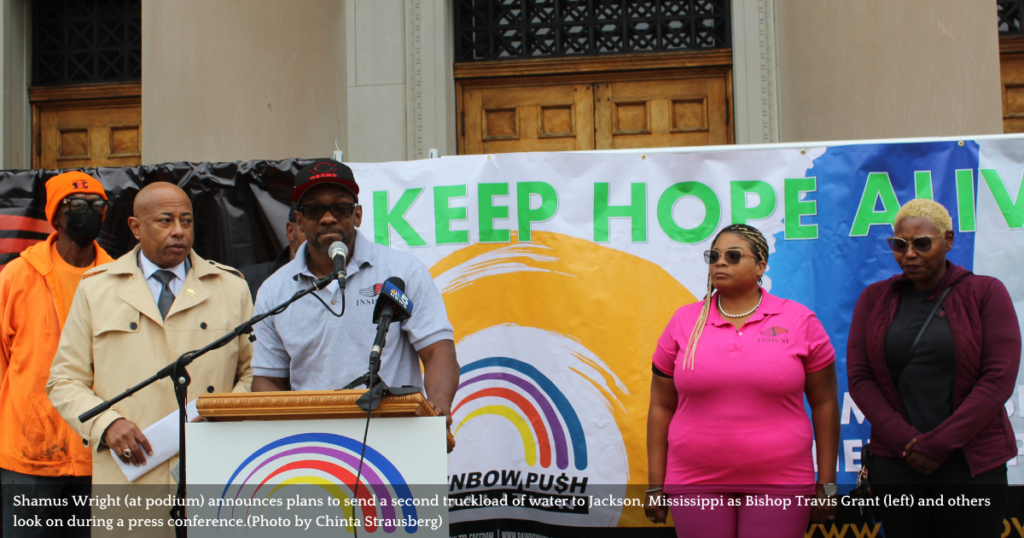 With a boil water order extended until November 22 for Jackson, Mississippi, Reverend Jesse Jackson, and Bishop Tavis Grant, acting executive director for the Rainbow PUSH Coalition, reached out to two Black businessmen to help deliver a second truckload of bottled water to that embattled city.

Jackson, Mississippi residents continue to complain about brown water coming from their faucets. They continue to depend on bottled water.

Reverend Hosea Hines, senior pastor of the Christ Tabernacle Church and head of A New Day Coalition for Equity and Black America (ANCEBA), has appealed to Jackson for assistance to ultimately get clean water for Jackson, Mississippi residents.

Grant read a statement from Jackson.

“Mississippi often places last on state lists for everything from health to income, given that 23 percent of the city of Jackson’s population falls below the poverty line. The city of Jackson is 82 percent Black and yet the city is the state capital,” wrote Jackson.

“One can only speculate why other parts of the state get resources, revenue, and responses quicker, faster and disproportionately more than Jackson. Clean water to drink, to bathe, to cook, to take your medicine, to hydrate your body should not be politicized and or weaponized,” Jackson wrote.

“It is immoral and inexcusable why the governor and the state legislature have acted in such an inhumane manner in fixing this problem. Clean water matters,” says Jackson.

Comparing Jackson, Mississippi to other parts of that state, Grant said, “It is as if there are two different states. The state of Jackson and the state of Mississippi. You cannot marginalize the long term impact this crisis is having on education, healthcare, and the quality of life for those who live in the cycles of despair and desperation every day.

“Our Keep Hope Alive Jackson relief drive is meant to respond and be proactive in creating a pipeline of immediate resources from Chicago to Mississippi that cannot be cut off,” Grant stated.

A 46-year member of the Rainbow PUSH Coalition, Huggins praised Jackson for “playing a major role in the growth and development not only of me as an individual but my company, the Riteway Construction,” Huggins said.

“To participate in a humanitarian effort like this, it is only right and fitting for me to do,” Huggins said.

Referring to his two non-profits, the Chicago Football Classic and Christmas in the Wards, Huggins said, “We send more kids to Historically Black Colleges in the history of this state.”

Huggins vowed “to do whatever we can do to help people in need.”

Wright quoted Abraham Lincoln saying, “When all can stand diversity, but if you really want to test a man’s character, give him power. And this right here is a result of putting the right people over the right places….”