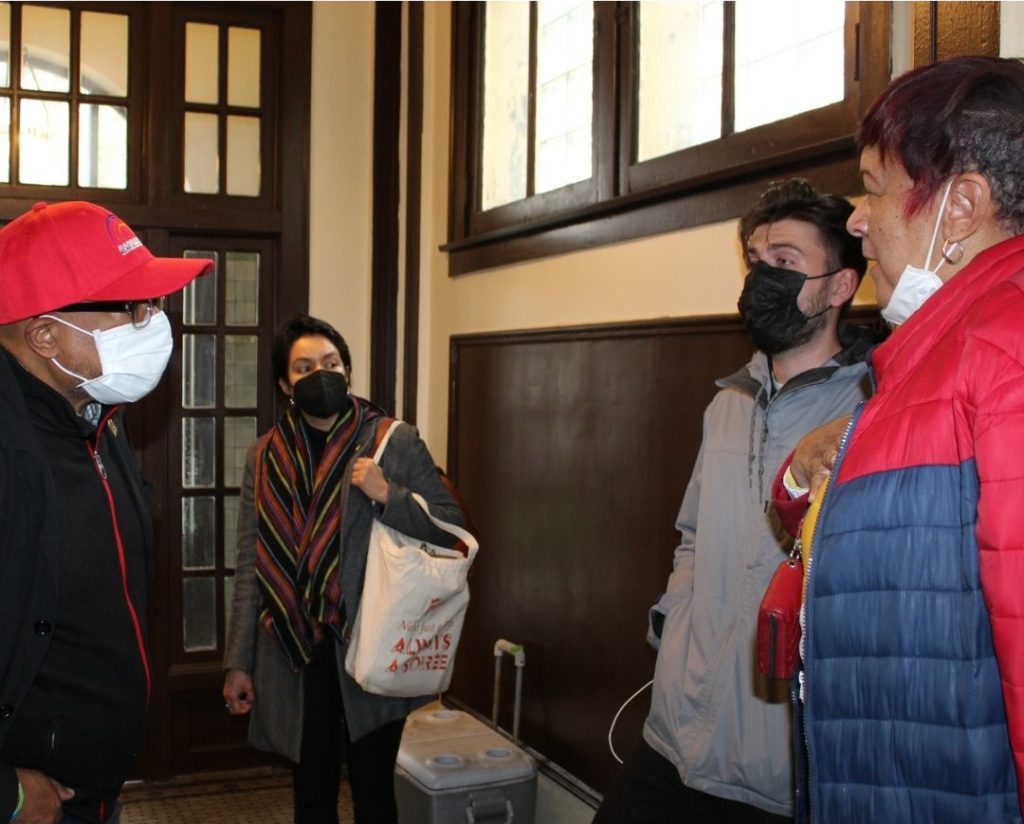 The Rainbow PUSH Coalition and the Metropolitan Tenants Organization (MTO) are calling for a federal investigation into an alleged out-of-state slumlord who is raking in millions at the expense of Sixth Ward seniors forced to live with roaches, peeling paint, mold, windows falling out of its frame and burglar gates, which organizers say are “death traps” waiting to happen. They then are allegedly evicting renters so they can flip the buildings for profit.

Having the distinction of being the only neighborhood in Chicago that transitioned from a European middle-class to an African American middle-class neighborhood, Ald. Roderick Sawyer (6th) is working with the Rainbow PUSH Coalition and MTO organizers to rid his historic community of three buildings allegedly owned by slum landlords where seniors are forced to sacrifice safety and health in buildings labeled as “death traps” by MTO and PUSH officials. The buildings are located at 219 E. 79th St., 7908 S. Prairie, and 6934 S. Princeton, managed by BSD Realty, located in New York. MTO officials say BSD manages 25 buildings in Chicago.

On behalf of Rev. Jesse L. Jackson, Sr., Rainbow PUSH Coalition National Field Director Bishop Tavis Grant went on a tour of Chatham, which is in the Sixth Ward and the community represented by Ald. Sawyer whose father was the late Mayor Eugene Sawyer.

And that is why Bishop Grant joined MTO’s Laura R. Garcia, Healthy Homes organizer, Samuel Scott Clendenning and David Wilson, both of whom are community organizers for MTO, on a “slum landlord building tour” of three walk-ups located in the Sixth Ward. What Bishop Grant saw he said was shocking because on the outside it was the Chatham he has always known, but inside of the three buildings managed by BSD Realty, were three “death traps waiting to happen.”

They toured the 7908 S. Prairie, 6934 S. Princeton and 7300 S. Wabash (which is also 21-23 E. 73rd) buildings where senior citizens lived with roaches, mold, ceilings falling, windows falling out of its frames, over heated units where warm air was coming through the ceiling and not the radiators which were cold to the touch, unlocked mailboxes and front doors that were open and accessible to the public.

A resident for 17 years, London Jamerson, of the 7908 S. Prairie building, has to live with burglar gates on her apartment complete with a pad lock having been burglarized once before. Her mailbox, like the others, is open, and she said the new realtor allegedly told the post office she and the others no longer lived there. On disability, she has not received her checks in three months and when she went to the post office where mail is held for pickup, she said it was closed due to the pandemic. Reached Monday, Jamerson said that section of the post office opened on Monday, May 9th.

Jamerson is worried about the mold in the building and the lack of security. “There is mold throughout the building,” Jamerson said. “There are warped floors, and the water comes out brown. You have to let it run for a while until it turns a bright yellow. There is chipped lead paint everywhere. Instead of removing the lead, they painted over it…put rugs over it on the floors. This is dangerous.  There are seniors in this building, and this lead paint is affecting them,” she said. “I am going to fight for them.”

While investigating one unit at the 219 E. 79th Street building where the ceiling had begun to fall, leaving a pile of chipped paint on the floor of a senior’s bedroom, Clendenning and Bishop Grant said, “this is serious.” “Lead paint can kill you,” Clendenning stated.” This is also the same unit where the senior’s bedroom window is falling out of its frame and the walls of the living room are “puckering up.”

Clendenning told the Chicago Crusader, “On Thursday, (May 5th), BSD told the court they needed two-months to fix everything up and that they are making great progress, and five days later the ceiling at 219 E. 79th St. fell.”

Saying slum landlords and their many housing code violations “is an attack on the community,” Clendenning said, “Housing affects violence levels, students’ success, general health, life expectancy, everything from the amount of savings in somebody’s pocket to the grade certificates in school. It has direct links to the equality of housing.” He quoted one tenant who told him, “Half the kids wouldn’t be on the corner if there were not mold in the house. Where do you go when there is no heat in the house?”

Clendenning also has a problem with a system he says “encourages and rewards mismanagement by landlords who come from out-of-town with more money than people in the communities, so people cannot compete. They run the buildings into the ground. They drive the tenants out any way they can whether it’s a legal eviction or an illegal eviction. They then flip the buildings for profit by remodeling, re-renting them at higher rates and fixing everything after people have spent their lives here and moved out.”

When asked what he wants to happen, Clendenning said, “We want the city to appoint a receiver to move forward into making this building guaranteed affordable housing for people from this community. We are also requesting a federal investigation of the mortgage system that would allow buildings like this to be bought in this condition for mortgages worth $1 million, $2 million and brokers making massive fees off these mortgages.

“We want the City Council to pass the Chicago Healthy Homes Ordinance which would put multiple protections in place as far as proactive inspections and a rental registry to prevent this from ever happening again,” said Clendenning.

And to elected officials, Bishop Grant said, “They must take a moral stance, a responsible stance from legislation to ordinance to save the lives of people who are seniors, at-risk and people who are living on the margins. The only hope they have is people like the governor, the City Council members and state legislators do their part to make sure we save these historically Black communities and the lives of the people who live in them.”

“I am working with the Metropolitan Tenants Organization,” said Ald. Sawyer. He vowed to make substandard landlords accountable and “to make sure they provide decent housing for the citizens of Chicago.”

When told on one of the buildings there was a sign indicating a realtor who claims to manage the building but did not, Ald. Sawyer said, “We are working with the Law and Building Departments so we can close some of these loopholes because they are problematic.

“They are doing this intentionally,” Sawyer said referring to keeping a bogus realty management name on the building. “They are intent on not fixing these buildings. They transfer ownership amongst themselves, and they will give 90 days in Building Court to correct these violations and make sure they can’t correct them again. They just transferred ownership again. It’s an endless cycle,” said Ald. Sawyer. The alderman said the Law Department is looking at the proposed Chicago Healthy Homes ordinance as well.

To report a slum landlord, call MTO’s hotline at: 773.292.4988. Calls placed to BSD Realty in Chicago were not returned.