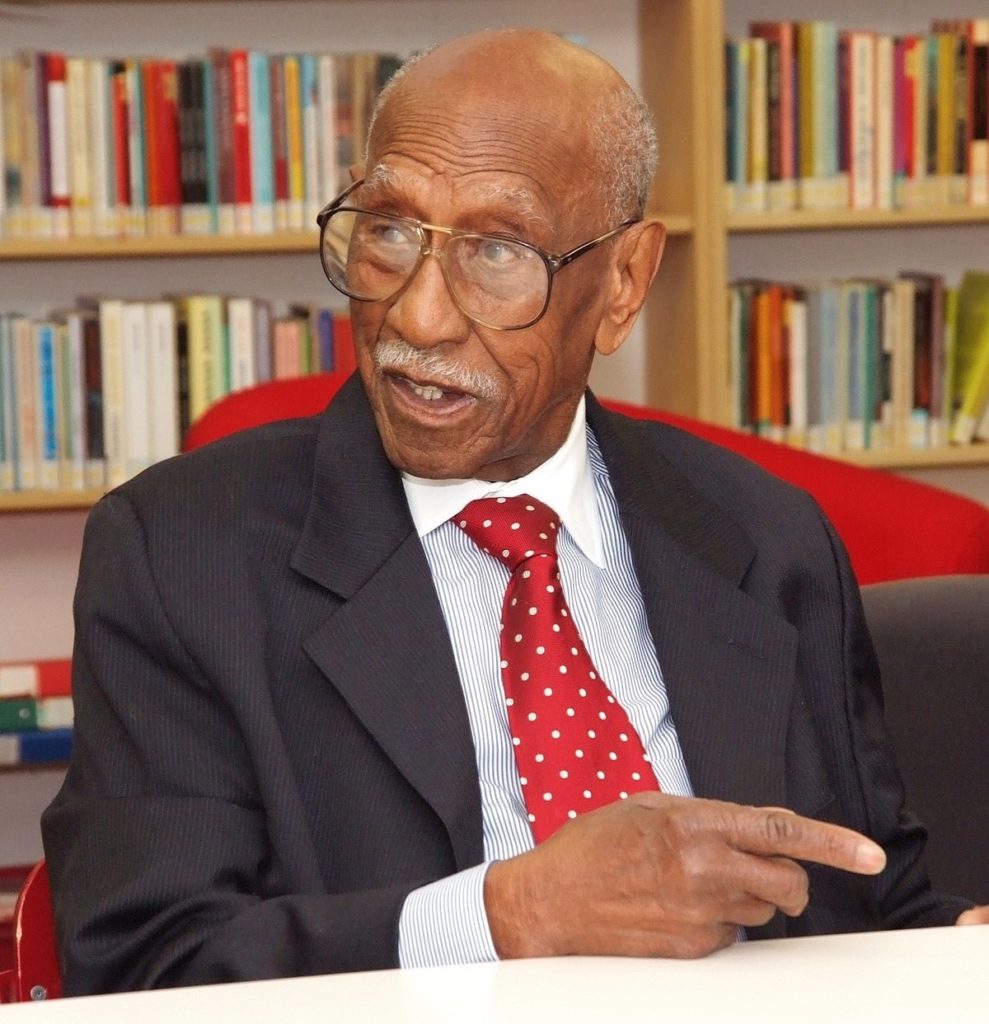 Pride and pageantry accompanied jazz, laughter and reminiscing about the good old days with Dr. Timuel Black during his memorial service. All that was needed was a birthday cake and Black himself for it to have been a party.

Black is gone, but a public memorial for Chicago’s most celebrated Black historian on Sunday, December 5, at Rockefeller Memorial Chapel at the University of Chicago was a fitting tribute to his legacy and contributions to Chicago and the nation.

The event at times felt more like a birthday celebration for a man who educated Chicago on Black history and paved the way for city leaders Mayor Harold Washington and President Barack Obama.

Two days before his 103rd birthday, over 100 people gathered to remember and celebrate the life and legacy of Black, who after more than a century of history lessons, books, marches and political campaigns closed his final chapter on earth October 13 at his Hyde Park home.

His public memorial at Rockefeller Memorial Chapel was a three-and-a-half-hour spirit-filled tribute that had six different emcees who presided over an extensive program that covered all aspects and achievements of Black’s life.

The tribute chronicled his decades as a powerful historian and storyteller, from his decades as a civil rights leader, to his years as a teacher in the Chicago Public Schools, to his role as a loving and devoted husband to his wife, Zenobia Johnson Black.

Black’s service began with a colorful procession down the center aisle that included an African drum salute and libation ceremony. It paid homage to Black’s proud past as a historic figure who inspired thousands of Blacks in Chicago, teaching them their history at a time when textbooks and schools ignored their ancestors’ contributions to the city and America.

By the end of his life, Black’s impact on Chicago and Illinois had touched people from all walks of life, many of whom came to his public memorial. “We want you to know how much we miss you,” said Governor J.B. Pritzker.

“Most of us could only hope to witness a century on this earth. Timuel Black shaped his century. He took on corporations, fighting to ensure Black voices were loud and proud in the labor movements of the 20th century.

Mayor Lori Lightfoot, Chicago’s first Black female mayor, said, “Today is a day of remembrance but it’s also a day of celebration. He was a gift to our city, our state and our country. I don’t have to recount for you today all of his outstanding contributions, all the marches, the union drives, the political campaigns that he organized.

“Nor do you need to be reminded of the schools where he taught, the institutions he helped to create or the books that he wrote. We stand united in our love and gratitude for the life of Tim Black. Because of his memorable warmth and good humor, he was one of those unforgettable teachers who for the rest of his life remained in contact with his students.”

Julieanna Richardson, founder of the Historymakers, shared how she first met Black in 1999 at his apartment in Hyde Park. She told Black of her idea to create Historymakers, an oral database of successful Black leaders and citizens across the country. She was a “recovering” lawyer who initially wanted to become an actress.

“I was not a scholar and needed to know if my idea had merit and met with his approval. With those words of encouragement, with his belief in our mission, we have grown to be the nation’s largest African American oral video archive with 3,400 interviews recorded in 413 cities and towns across the United States and abroad,” Richardson said.

“We owe that to the support and encouragement of Tim Black. He was always there for us to talk things through, to provide context. Even up to three weeks before his passing, I was his student of the ultimate teacher and I will always hold him, this man, in a debt of gratitude.”

One year after her first meeting with Black, Historymakers interviewed him on June 19, 2000.

Melody Spann-Cooper, chairman and CEO of Midway Broadcasting, shared the story of her interview with Black on WVON in 2016, when the radio station was located on 87th Street in Chatham, discussing their love of Black Chicago. It was a snowy day. Spann-Cooper said because of the inclement weather and his age, she was afraid that Black would cancel.

But he didn’t. Spann-Cooper hoped to get at least a one-hour interview. The interview lasted for two and a half hours.

“It was the most powerful interview I had ever been a part of,” Spann-Cooper said.

“Because I read his book [Bridges of Memory] two or three times, I thought I could match wits with him, at least on some things in Chicago. About 30 minutes into the interview, I think he was getting a little flustered with me. So, I decided to do what any student of history should do: shut up and listen. And I did. And Professor Black began to generously and effortlessly pour history into that microphone.”

Spann-Cooper said during that conversation Black told the story of how Jesse Binga, Chicago’s first Black banker, paid for aviator Bessie Coleman’s flight school education in Paris, after reading an article in the Chicago Defender.

Spann-Cooper said Black also told the story of how DuSable High School was built to alleviate the overcrowding of Wendell Phillips High School during the Great Migration.

Spann-Cooper also mentioned Black’s story of how the birth of Black political empowerment came out of the 3rd Ward Democratic Party under Chicago’s first Black Congressman, William “Bill” Dawson. She said the Party paved the way for political icon and former Cook County Board President John Stroger, and Alderman and Congressman Ralph Metcalfe.

“Professor Black told fascinating stories. It was a day I’ll never forget and will always cherish…Professor Black had many talents: civil rights activist, educator, strategist, author, husband, father. But to me his gift was being one of the nation’s preeminent storytellers.”

Jonathan Jackson, son of Reverend Jesse Jackson, Sr., said his father met Black on the picket line during school segregation. In his eulogy, Jonathan Jackson said “Mr. Black is the missing link in our history. God granted him 102 years of age. Not for himself, but for us.”

Black’s wife, Zenobia Johnson Black, said, “Tim loved people. He loved justice. He loved teaching and he loved me. Tim loved himself and consequently he could show love to others. He grew up secure in the knowledge that he was loved and that his life mattered.

“At the end of his life, Tim was not afraid, not agitated or angry. He would say he had lived so much longer than most. He was grateful to still be here. He regretted that the combined effects of his aging body and the pandemic kept him home most of the time. He would have preferred to be out and about, going to lots of meetings, socializing and enjoying live jazz at Room 43 on Sunday evenings.

“Tim truly loved his life. It was a great life. He would often say, I’ve done the best I could. We couldn’t accomplish everything. There’s still so much to do.”