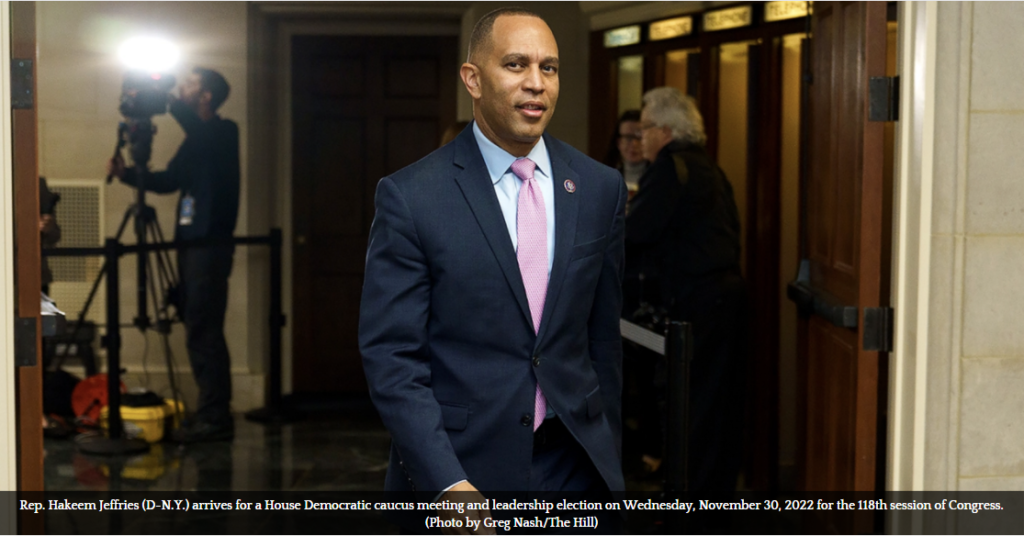 House Minority Leader-elect Hakeem Jeffries (D-N.Y.) has gotten off to a good start with the left, pacifying reservations about whether he is progressive enough to lead the new Democratic caucus.

Jeffries, who next year will become the first Black lawmaker to lead either party in either chamber, has enjoyed an especially warm reception among top liberals, a significant step towards party unity as Democrats navigate the post-midterm growing pains of governing in the minority.

“Hakeem’s instincts are more progressive than some folks recognize,” Adam Green, co-founder of the Progressive Change Campaign Committee, said Wednesday after Jeffries was elected. “I expect that to become apparent as the fight is on with Republicans on everything from protecting Social Security benefits to reinstating the expanded Child Tax Credit to fighting right-wing efforts to claw back bold climate policy.”

Jeffries hasn’t always been embraced so fully. Some outspoken lawmakers, campaign operatives, and activists have viewed parts of his résumé, including his prior work as a corporate lawyer, as reasons to be cautious about his potential allyship. And his defeat of Rep. Barbara Lee (D-Calif.), a liberal icon, in a leadership race in 2018 angered a number of Lee’s progressive allies.

But as he prepares for his elevated position, Democrats on the left are willing to give Jeffries a chance, hoping that his courtship of their flank will lay the groundwork for a productive relationship as they fight a GOP emboldened by the right wing set on deflating their momentum.

The New York congressman, who openly identifies as a progressive, has already started an informal communication channel to the liberal side of his caucus. This week, he talked privately with multiple members of the “squad” group of young progressive lawmakers of color, according to a report in Axios, one of the earliest indications of his olive branch potential gearing up to the transition of power. And the outreach was continuing into Thursday, when Rep. Rashida Tlaib (D-Mich.), another “squad” member, said she was preparing to meet with Jeffries.

Rep. Alexandria Ocasio-Cortez (D-N.Y.) said that she considers it “a step forward” to talk with the new leader directly. “He decided to reach out and sat down with me. It was an introductory conversation,” she said.

While Ocasio-Cortez said it “remains to be seen” if he will be a strong champion of the left in the next Congress, others say he’s been talking informally to progressives regularly and that he’s shown a commitment to make contact.

“This is not new outreach. He’s worked with them for some time,” said one Democratic strategist close to top congressional lawmakers in leadership. “It’s important to be a leader of diversity and inclusion. Diversity means not just race, gender, geographics and all those things, but diversity of thought. And inclusion of thought.”

While Jeffries has occasionally been on the receiving end of progressives’ ire, he has also situated himself within their orbit, adopting a pragmatism that many lawmakers have found success with during President Biden’s term. He’s a member of the Congressional Progressive Caucus and has often sided with the left wing over moderates during policy debates, dating back to when he was first elected in 2012.

“It’s important for him to reach out to all four corners of the Democratic caucus square,” said the strategist in touch with prominent lawmakers on Capitol Hill. “It’s not like he’s new to this, he’s actually true to this.”

On Wednesday, when Jeffries was formally elected, any potential criticism from progressives in Congress was muted. He won his position without rivals from either wing of the party, and Speaker Nancy Pelosi’s (D-Calif.) blessing of her 52-year-old successor provided a helpful boost of confidence.

Jeffries returned the favor, praising Pelosi’s accomplishments with fellow caucus leaders. “We stand on their collective broad shoulders,” he said.

The reception comes at an important time for Democrats. Biden is experiencing the benefits of a relatively favorable midterm cycle, and Senate Democrats could add another seat to their narrow majority in next week’s runoff elections in Georgia. The president’s approval rating has also ticked upward, giving House Democrats room to make the argument that their progressive agenda is linked to his success.

With Jeffries at the helm, there’s optimism among some progressives that he’ll press their priorities.

“He cares about affordable housing; he cares about universal child care; he cares about the issue of racial justice in all its forms,” said Rep. Jamaal Bowman (D-N.Y.), another “squad” member. “So I’m going to be one of the many people who’s going to push as hard as possible so we’ll be as aggressive as possible in those areas, and other areas. And let’s see where that goes.”

Rep. Raul Grijalva (D-Ariz.), a former head of the Progressive Caucus, said he remembers well the clash with Lee for the caucus chair spot in 2018. But those tensions, he said, are water under the bridge.

“I don’t think there’s any lingering resentments. … And I think Barbara Lee had a lot to do with calming the waters of that potential division, which was becoming one,” Grijalva said. “I think people are underestimating him. I think the way he kept the caucus together [and] made his transition seamless — I was very impressed.”

As evidence of how successful Jeffries has been in winning over the liberals, Rep. Mark Pocan (D-Wis.), another former Progressive Caucus chair and top negotiator among Democrats, had given one of the nominating speeches ahead of this week’s leadership vote. The liberal opposition to Jeffries, Pocan said, has always come from outside of Congress, not from within.

“It’s never been an internal issue among members,” Pocan said. “I think there are just some folks on the outside who, it doesn’t matter who you put in that position, they’re going to say, ‘Oh, he’s from New York therefore he must be Wall Street.’ I don’t think any of those things hold any real weight, especially among members who know him and know his record.”

Despite the obvious grace period, not all progressives close to the House expect Jeffries’s ascent to be so smooth. One prominent organizer close to Progressive Caucus leadership suggested Jeffries has been in the background during the left’s top policy debates.

That sentiment has raised concerns among those who want to see the House ramp up its tilt leftward, including through more liberal membership and legislation if they reclaim control of the chamber in two years.

“Even though CPC members will make up about half of the Democratic Caucus in the new Congress, the core CPC values like end new fossil fuel investment, stop Medicare and VA privatization, freeze the military budget, raise wealth taxes, restore the 50 percent staffing cuts at the NLRB and more are not championed by Jeffries,” said Larry Cohen, who chairs the group Our Revolution, which started with Sen. Bernie Sanders’s (I-Vt.) first presidential bid.

“The CPC reorganizes next week and I expect these points to be emphasized once Chair Jayapal, and other CPC leaders are elected,” Cohen said.

For now, the House’s liberal leadership is striking a more optimistic tone. Rep. Pramila Jayapal (D-Wash.), who is seeking reelection, said she is “thrilled” to work with Jeffries as well as Reps. Katherine Clark (D-Mass.) and Pete Aguilar (D-Calif.), who were elected to the whip and Democratic caucus chair positions this week.

Jeffries, too, is downplaying any past frictions with other members, liberal or otherwise. Indeed, he says a primary goal is to be both a voice for everyone in the Democrats’ diverse caucus and a bridge-builder between the young and restive progressives, the more centrist New Democrats and the moderate Blue Dogs.

And he’s quick to note his blanket policy of supporting incumbent Democrats of all stripes when they face primary challenges.

“I have no issues with any member of the House Democratic Caucus, and have been supportive of everyone electorally, whether they are in the center, center left, or the more left part of our caucus — and will continue to be supportive of every single House Democratic incumbent,” Jeffries told a small group of reporters on Capitol Hill Tuesday night, just hours before he was elected to be the party leader.

Jeffries also pointed to an underlying maxim of congressional governance: The party in charge almost always has a more difficult time coming together — a dynamic that will help him considerably in his own efforts to unite the minority Democrats next year in the shared goal of winning back control of the House in 2024.

“There’s nothing more unifying than being in the minority,” he said.