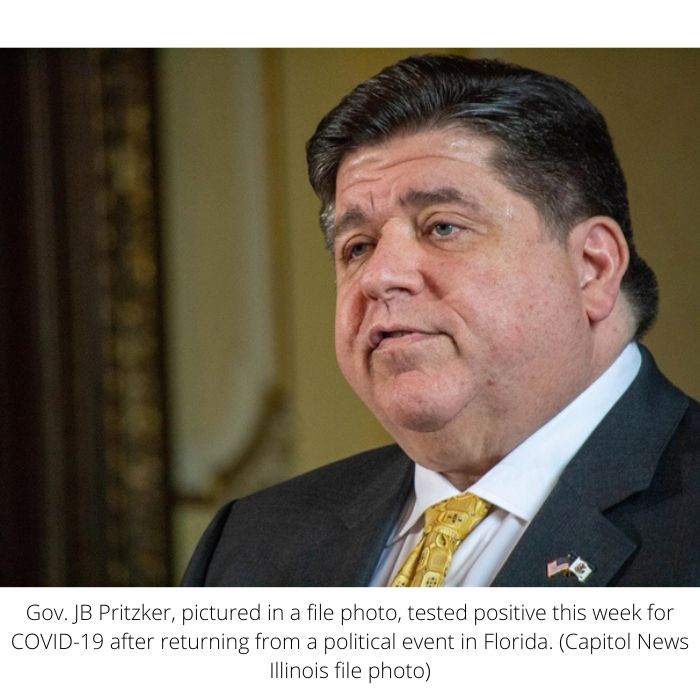 Gov. JB Pritzker has tested positive for COVID-19 and is isolating at home, his office announced Tuesday, July 19, three days after he spoke at a gathering of Democrats in Tampa, Florida.

Pritzker’s press office said he is experiencing mild symptoms and has received the anti-viral medication Paxlovid, a drug that received Emergency Use Authorization from the U.S. Food and Drug Administration in December for individuals at high risk to the effects of COVID-19.

The drug, according to clinical trials, reduced by 89 percent the risk of hospitalization and death from COVID-19. It is manufactured by Pfizer.

Pritzker is also vaccinated against the virus and has received two booster shots, according to his office.

The governor tested positive during “routine” testing after he arrived home from Florida, having had several close contacts with other COVID-19-positive individuals at the gathering of Democrats.

Pritzker’s office said he will work from home and follow the current U.S. Centers for Disease Control and Prevention guidelines, which call for at least five days of isolation after the positive COVID-19 test, regardless of vaccination status.

“He urges all Illinoisans to continue following CDC guidance, utilize anti-viral treatments, and get all available boosters,” his office said in a statement.

The governor’s first positive test came more than two years into the pandemic which first led him to issue a disaster declaration in March 2020.

It also came as the entire state was located in a “high transmission” COVID-19 area, and 50 counties were considered to have high COVID-19 community levels in Illinois. Community levels factor in hospital admissions and available hospital beds, as well as transmission rates.

Another 44 Illinois counties were at medium community levels as of Friday, while eight counties were considered at low levels, according to CDC.

Despite the rising transmission rates, mask mandates in Illinois and across the nation have largely been lifted.

While the number of deaths and hospitalizations are well below pandemic highs, still 63 deaths were recorded in COVID-19-positive individuals in Illinois last week for an average of nine per day.

As well, 1,412 individuals were hospitalized for COVID-19 in Illinois as of Monday night, with 152 of those individuals in intensive care unit beds and 48 on ventilators. About 84.8 percent of Illinoisans age 12 and older had received at least one vaccine dose as of Tuesday while 76.9 percent were fully vaccinated, according to the Illinois Department of Public Health.

Hospitalizations numbers are well below pandemic highs of more than 7,000 in January, but they have been trending upward since April when they dipped below 500.

The positive test also came after Pritzker announced recent changes to his COVID-19 executive orders which he has issued along with consecutive 30-day disaster declarations since March 2020. They loosened vaccine mandates for health care workers and eliminated them for higher education students and staff.

Pritzker’s positive test also comes amid a reelection campaign in which he faces state Sen. Darren Bailey, R-Xenia, who has sharply criticized his pandemic response.

The Pritzker campaign has touted his pandemic response, running advertisements with the tagline “strong leadership in tough times.”

On Tuesday, Bailey posted to Twitter that he was praying for Pritzker’s speedy recovery.

In Florida, meanwhile, where the governor spoke over the weekend at the Leadership Blue gala of Florida Democrats, COVID-19 community levels were considered high in all but nine of the state’s 67 counties.

At that gathering, Pritzker said Florida’s Republican Gov. Ron DeSantis was “Trump with a mask on,” criticizing the leader’s response to COVID-19.

The Florida speaking engagement was one stop on a recent east coast trip that included two days in Augusta, Maine, attending a series of meetings hosted by the National Governors Association. He also spent time at the White House early last week to celebrate the passage of bipartisan gun law reforms.

The Florida speech and a recent speaking engagement in New Hampshire have in recent weeks led to speculation that Pritzker could be considering a run for president in 2024 if Joe Biden does not seek reelection.

In recent interviews he has not denied interest, but he has said Illinois remains his focus.

Bailey, meanwhile, has criticized Pritzker’s trip out of state, calling out the governor for “hobnobbing” with “wealthy liberals” amid concerns about crime levels in Chicago.