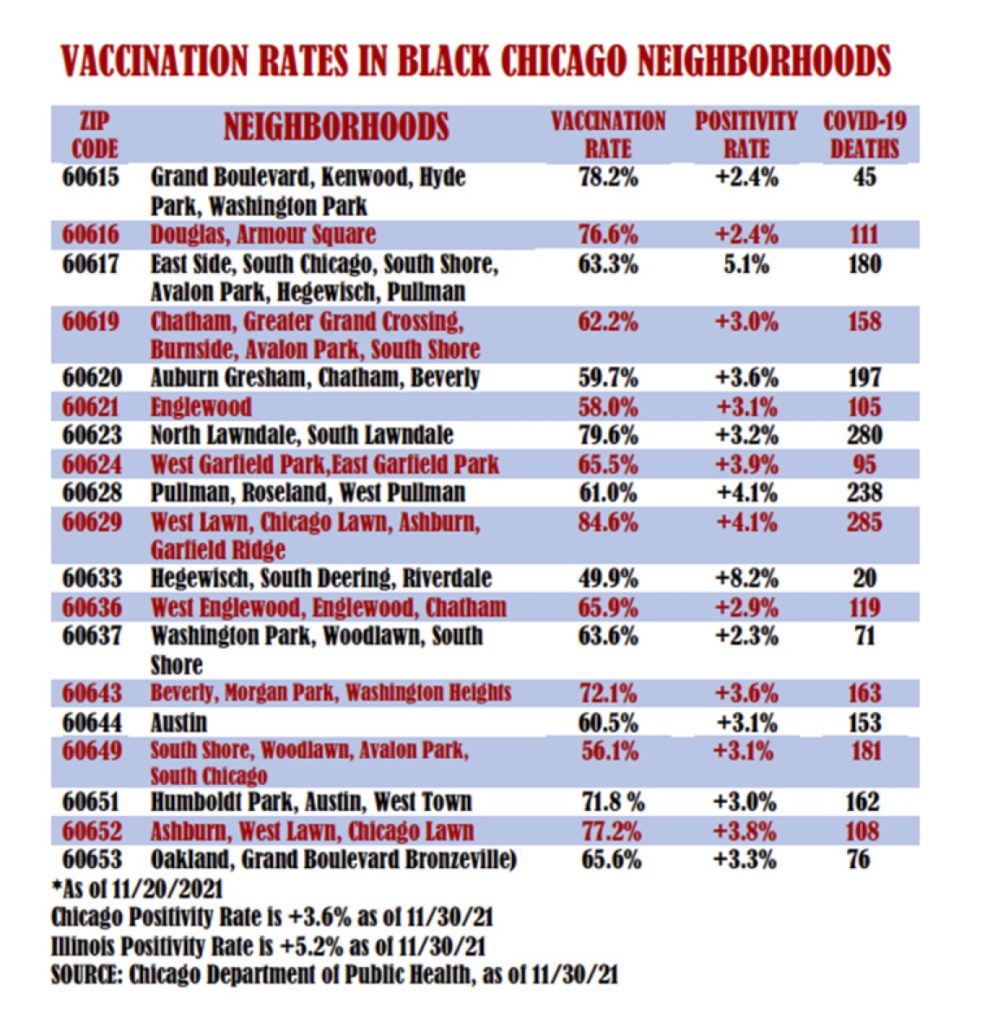 Nine Chicago zip codes, which include predominantly Black neighborhoods or large Black populations, have positivity rates higher than the city, according to a Crusader analysis of data from the Chicago Department of Public Health.

The news comes as COVID-19 deaths among Blacks in Cook County increased slightly in November as the new Omicron variant renews concerns of a surge in cases in states across the country.

The positivity rate in Chicago is 3.6 percent, but the figure is higher in communities, including Ashburn, Austin, Auburn Gresham, Chatham, Pullman, Roseland, West Pullman, Beverly and Morgan Park.

As indoor gatherings increase during the holiday seasons, medical experts and scientists say hospitalization rates in Illinois and many states are increasing among fully vaccinated residents who have not received booster shots.

“What we’re starting to see now is an uptick in hospitalizations among people who’ve been vaccinated, but not boosted,” Dr. Anthony Fauci, the director of the National Institute for Allergy and Infectious Disease, told NBC News on November 30. “It’s a significant proportion, but not the majority by any means.”

Meanwhile, the new Omicron variant of the coronavirus continues to spread across the globe two weeks after it reportedly began in South Africa. Health officials said Tuesday that the Omicron variant was in Europe several days earlier than previously known. The Omicron variant is now the dominant variant in at least 20 countries, raising questions about whether the pandemic is about to surge once again.

However, the World Health Organization (WHO) warned on November 29 that the global risk from the Omicron variant is “very high” based on the early evidence, saying the mutated coronavirus could lead to surges with “severe consequences.”

The new variant has renewed concerns for unvaccinated residents and the need for vaccinated residents to get booster shots. As the Omicron variant spreads in other countries and the positivity rates increase amid rising indoor gatherings, Mayor Lori Lightfoot released a statement.

“As a City, we are very engaged in the heightened discussions regarding the Omicron variant of the COVID-19 virus, particularly with our federal partners. At this point, there are many questions, which scientists across the world and at the Chicago Department of Public Health, are actively working to address all while closely monitoring this strain. While that work continues, we must as a city, and importantly as individuals, continue to follow the public health guidance: get vaccinated, and if vaccinated, get your booster; wear a mask indoors and when you’re around other people; and if you are feeling sick, stay home to save lives. The unvaccinated remain the most at risk to themselves and others, so please get vaccinated as soon as possible. For more information go to www.chicago.gov/COVIDvax.”

On December 1, drugmaker Merck formally filed a request for emergency authorization for its COVID-19 pill, which the Food and Drug Administration (FDA) narrowly approved a day earlier.

Merck claims the pill cuts the number of hospitalizations and deaths in half. The pill is the first medication that treats COVID-19 cases; however, the FDA scientists said their review identified several potential risks, including toxicity to developing fetuses and birth defects that were identified in studies of the pill conducted in animals. Diarrhea is listed as a side effect to the pill.

As a precaution, later this week, President Joe Biden’s administration is expected to implement stricter testing requirements for all travelers entering the United States, including returning Americans.

The measures aim to curb the spread of the potentially dangerous Omicron variant, according to three federal health officials. The measures would require everyone entering the country to be tested one day before boarding flights, regardless of their vaccination status or country of departure.

Administration officials are also considering a requirement that all travelers get retested within three to five days of arrival.