Pfleger questions $44B aid to Ukraine 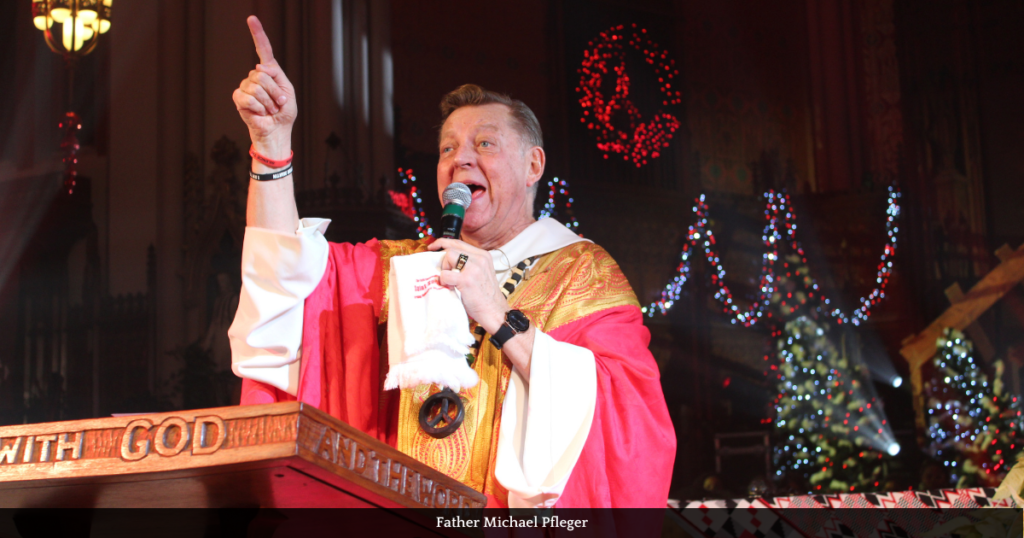 During a social justice-oriented Christmas Eve Midnight Mass, Father Michael Pfleger said while he is outraged at what is happening to the Ukrainians “by the hands of Putin,” he is equally disturbed at Congress for passing an additional $44 billion to aid Ukraine, now totaling $100 billion, when America has homeless people sleeping on the streets.

Pfleger was referring to the huge $1.7 trillion spending bill Congress passed Friday, December 23, in a party line 225-201 vote that included $44 billion for emergency aid for Ukraine. The bill now goes to Biden for his signature.

He commented if we have that kind of money to send to Ukraine, there should be money to take care of our own, especially the homeless, many of whom are sleeping under viaducts and tent cities across the nation.

Turning to yet another social justice issue, Pfleger referred to rapper Kanye (Ye) West and his friends, Kyrie Irving and white supremacist Nick Fuentes, regarding their Black, anti-Semitic remarks, which reportedly have caused Ye to lose more than $2 billion.

Pfleger is saddened to see Kanye West “melting down before our eyes, and we know that Irving needs some help.”

He asked where are those around them to give them a helping hand as they sink in social media backlash. “Are we going to sit back and watch them publicly get whipped and beaten down like slaves on an auction block?”

Addressing gun control, one of his most vocal social justice issues, Pfleger asked, “Are we going to sit back and watch assault weapons and high-capacity magazines become a part of America’s wardrobe in the name of profit?”

The social justice advocate asked if we are willing to watch the bloodletting and killing of so many children. As of October 2, 2022, Chicago police say 286 children have been shot this year and 43 killed.

Referring to Chicago Police Superintendent David O. Brown, Pfleger said, “Are we going to just sit and allow a police superintendent who has absolutely no strategy to deal with the rise in crime, to continue to remain in office.

“And are we going to continue to be silent and not stand up when we know what’s going on with some of our children and allow our children to die in vain?”

Pfleger asked, “Which Jesus are we going to follow? Two thousand years ago, the real Jesus, the radical Jesus, invaded the earth…and took possession of hostile territory.”

For those who say they can’t stand up against social wrongs like racism, Pfleger reminded them of those many Blacks who marched and died so that they would be free today.

Pfleger posed more questions to his congregation, including, “If we are going to follow the real Jesus, or are we going to just sit down and watch white supremacy rise?” “No,” the members retorted back.

“Are we going to just sit by and let homophobia and racism grow?” Again the congregation yelled, “No.”

“Are we going to just sit by in churches and watch a corrupt government rule without any possibilities?” “No,” congregants responded loudly.

He challenged his members to emulate Jesus, to become social justice agents ready to stand up and have the courage to fight against the wrongs of this world, like “the real Jesus.”