Pfleger getting a lot of love from supporters 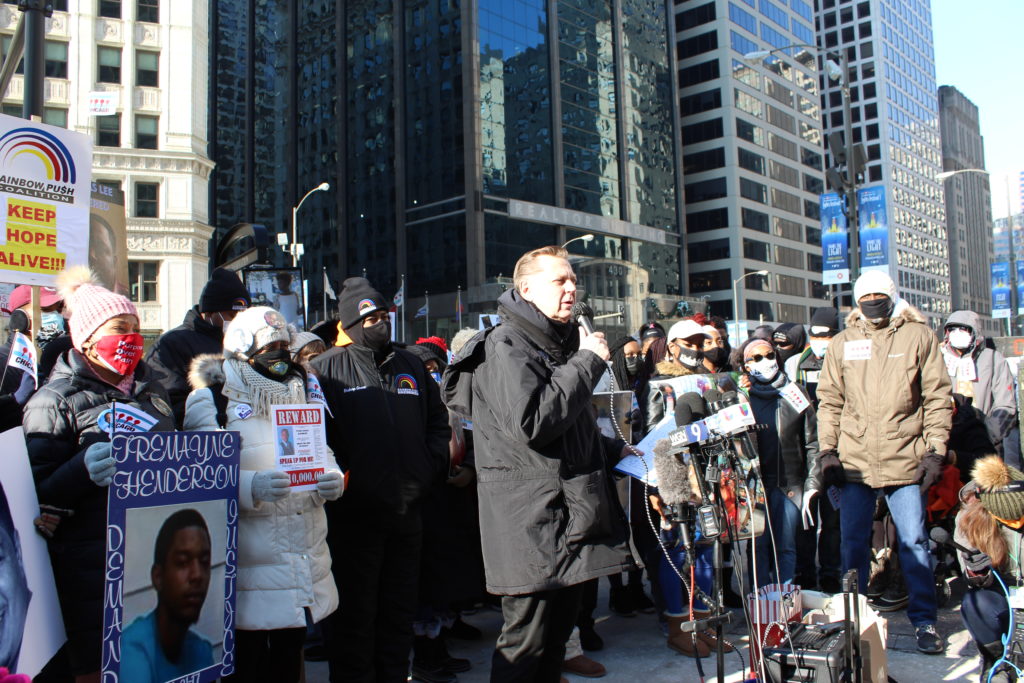 Since Father Michael L. Pfleger was appointed pastor of Saint Sabina in 1981, the youngest priest ever to hold that position, he has brokered more than a dozen gang truces, saved young Black men from the clutches of the prison system, fought for food for those who are unemployed and underemployed, and has demanded reciprocity for Blacks.

And it was the love of children that led him to adopt three Black boys: Lamar, Jarvis Franklin, 17, who was killed on May 30, 1999, and Beronti Simms who died a few years ago. Father Pfleger has dedicated his life to fighting gun violence.

Father Pfleger got rid of the drug houses that once stained the intersection of 79th and Racine. Today, Walgreen’s and BJ’s Market, now being used as COVID-19 testing sites, have returned honor, respect and jobs to the poverty-stricken Auburn Gresham community.

And, when the looting went down last year and the 79th and Racine Walgreen’s began its repair, Father Pfleger was furious that the owners hired a Hispanic prime contractor. After many talks, Walgreen’s hired a Black prime contractor, and his fight for equity for African Americans has continued.

When he took over Saint Sabina, he often tells his members how he stopped people from playing bingo and how when he fired the man who was running it, he was shocked when the operator of that popular game had a gun and threatened to shoot him.

According to Father Pfleger, the man was skimming money off the top of the bingo proceeds. The young priest drew a line and said, “There will be no gambling at Saint Sabina.”

Sadly, today, Father Pfleger has been asked by Cardinal Blase Cupich to “step aside from ministry following receipt by the Archdiocese of Chicago’s Office for Child Abuse Investigations and Review of an allegation of sexual abuse of a minor more than 40 years ago.”

This is just an allegation, just like when Cardinal Cupich accused Father George Clements, a retired priest, of a similar crime that had happened 45 years ago. Father Clements, a popular African-American priest, was head of Holy Angels for decades.

After Clements was accused of allegedly violating a minor last year, he had a stroke and died. Ironically, after his death, the Archdiocese announced that Father Clements was innocent of those charges.

Father Pfleger did not return this reporter’s calls but did post this message on his Facebook on Wednesday, January 6: “I can’t possibly respond to the hundreds of texts, emails, and calls that I have received from all across the nation since yesterday. I am devastated, hurt and yes angry, but I am first, a person of Faith, I trust God. Please keep me in prayer and the Faith Community of St. Sabina. I have been asked by the Diocese not to speak out at this time. I am Blessed with leadership and amazing members, whom I love.

“Pray for the person, my life is more than a 40-year-old accusation, and on that and my Faith I will stand. The Lord is my Shepherd. I love you.”

The response from Saint Sabina members and supporters has been profound, especially on Father Pfleger’s Facebook page.

Father Pfleger’s journey as a white priest in one of the largest Black Cath- olic churches in America, has taken him through many streets of Chicago, including under viaducts where he often brings food, clothing and money to the homeless.

It has taken him to protest gun shops like Chuck’s in Riverdale where he was arrested. Father Pfleger, Rev. Jesse L. Jackson, Sr. and Father Clements were often arrested fighting against gun violence, and billboards that advertised tobacco products in the Black community including near schools, as well as racism.

Father Pfleger has also marched on community stores in the Auburn Gresham community pulling out outdated can goods and demanding that store owners hire African Americans. He once went toe-to-toe with one storeowner on Racine Avenue. That store was later closed for a number of violations.

But because of his background, Father Pfleger has a passion for helping people no matter who they are. One young African-American man who had served eight years in prison for drugs came to him seeking help. He said the police were trying to set him up so he would have to go back to prison, and he was trying to turn his life around.

Father Pfleger called in the police and told them to leave his “son” alone and that if he did break the law, he would bring him in. Today, that young man is the largest promoter in the Midwest. He lives downtown.

There was another time a few years ago when Auburn Gresham was experiencing problems with prostitution. He went out looking for the ladies of the night and offered them money. The shocked women were startled, almost speechless. Father Pfleger offered them money to come to church to hear the word. They took him up on his offer.

As a result, Father Pfleger turned their lives around. He helped them get training and jobs. Today, many of them are living respectable lives, but Father Pfleger did get some flak from a few Black ministers who criticized him for “buying” the ladies of the night.

But that is what Father Pfleger does. He rocks the boat, like last Sunday when he said he is opening up the church for new members, and he didn’t care if they were straight, gay, homeless, addicted—just come into this Holy place. Some of his ideas have caused him huge challenges.

One of the most difficult things he has done was to broker one of his first gang truces. Every week his members would march throughout the community calling out for the gangs to put the guns down. When they saw the marchers, they would run.

So, Father Pfleger called on professional athletes to join him. It worked. The gangbangers rushed up to meet them, but Father Pfleger had a plan. His staff was there to offer them free GED tests, jobs and food for their families. Father Pfleger even bought suits for the men and had his job center teach them how to conduct an interview.

When Father Pfleger asked them to play basketball at his ARK of Saint Sabina, he had to rent two buses because they were going to fight. Well, the rival gangs soon were shooting ball at the Ark rather than shooting bullets at each other.

But there was one gangbanger who had put out a $10,000 bounty on Father Pfleger’s head, and he was serious. The popular priest was successful in turning this gangbanger around—only to lose him to gun violence. The gangs didn’t like the fact that one of their own was going to church, playing it straight.

And then there are the hundreds of turkeys that Father Pfleger gives out several times a year and the weekly boxes of food. His drive-by food giveaways have motorists lined up from 71st and Racine to 1210 W. 78th  Place.

Father Pfleger also gives out school supplies and hundreds of toys for Christmas. He gets scholarships for students, and he supports a church in South Africa.

He calls himself the servant of Christ, a man who once lived with a family of 10 at the Cabrini Green housing development, worked with Native Americans in Oklahoma and was a chaplain at the Cook County Jail.

On December 31, 2020, Father Pfleger led scores of supporters on a silent march along the Magnificent Mile to remember the more than 750 people killed in 2020 and to put the mayor and the governor on notice that their demands that gun violence must be addressed, and supporters will not go away.

In a letter dated January 5, 2021, the Cabinet of the Faith Community of Saint Sabina believes that these accusations are unfounded, and we boldly stand behind the integrity, passion, work and ministry of our Sr. Pastor, Rev. Michael Pfleger.

His ministry spans over 45 years and he has maintained his mission of Luke 4:18, “to proclaim the good news to the poor, proclaim freedom to the prisoners, sight to the blind and set the oppressed free,” reaching thousands of citizens in the city of Chicago and worldwide. They feel that Father Pfleger will be fully exonerated.