Pfleger: Back and ready to continue fight for justice 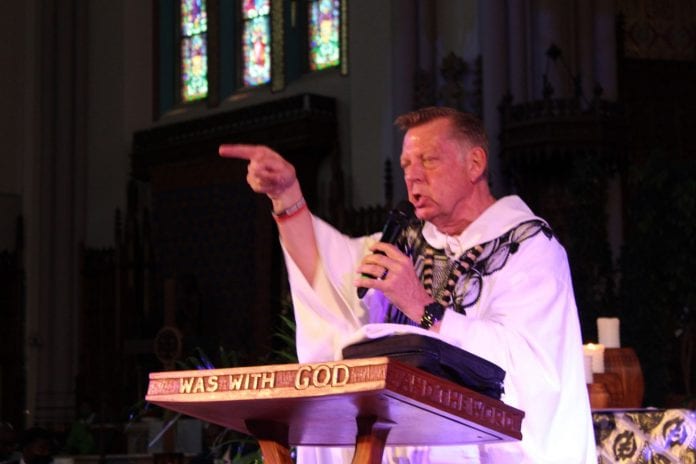 Saying he is glad to be home after a five-month long separation from his parish, Saint Sabina Church, Father Michael Pfleger Sunday, on June 6, made it clear to his foes and doubters that the period of solitude has renewed his social justice fighting spirit to an even higher height.

Pfleger, appointed to head Saint Sabina where he has ministered for 40 plus years, was only 31 years old at the time he assumed the pastorship. He was the youngest priest to pastor a church.

Pfleger held Mass for the first time since Cardinal Blaise Cupich reinstated him, clearing him of all sexual abuse charges on May 24.

“The last five months have been a roller coaster of hurt, depression, pain, not knowing what people are thinking about you…what people are wondering,” he said.

“I stand here this morning, back with my church family and friends, and I’m grateful,” Pfleger announced as the receptive parishioners and supporters applauded.

The embattled pastor spoke before the packed congregation, including an overflow crowd in the church’s lower level McMahon Hall, where supporters and members watched church services on a huge screen.

Pfleger spoke of the pain and humiliation he has suffered since the Cardinal sent him a message on January 5, 2021, informing him that a 60-year-old Texas man was charging him with alleged sexual abuse that occurred more than 45 years ago, and days later the man’s 63-year-old brother claimed the same alleged violation.

The Cardinal gave the stunned Pfleger two hours to leave his home at the Saint Sabina rectory before the press would be notified. In that short time, he had to inform his staff and board members, find a new home and retain an attorney at his own expense. A friend offered him a one-bedroom downtown apartment where he moved with his dog, Justice.

At one point he was given a song of encouragement entitled “Let Your Power Fall,” and Pfleger said as he recited the lyrics, he must have played the song a million times during his separation from the church.

During his isolation many friends came by to see him, some even bringing food. Those visits and the supportive calls and text messages he received gave him the strength to endure the mental and physical pain of the church-imposed separation from his parish.

“I know my name will be damaged for the rest of my life and most of that is by people who hated me anyway. There are people walking today who are not happy I’m back. Well, take off your party hat and blow out the candles. I’m back.”

He pointedly thanked all those who believed in him. “I want to thank you for not running and hiding,” said Pfleger, and then went on to also thank his church leadership for keeping the church operating in his absence.

While at the pulpit he acknowledged those attending Sunday’s service, among them his two attorneys, Jim Figliulo and Mike Monico, and also thanked his other two lawyers, Ryan Mitsos and his Canon lawyer, Monsignor Lagges, who could not attend. He hugged movie producer, actor and professor Spike Lee who flew in to see him.

“I thank you for keeping my voice out there when I had no voice,” Pfleger said in his thanks to his many supporters.

It was a large circle of friends that helped him through the “painful nightmare, the most extended period of pain in my life,” he said, his voice quivering.

“And, now I see that name being assassinated,” he said. “All I could say was that I was innocent.”

Pfleger said he could not say what he knew about those accusations or the individuals; yet he had to endure constant headlines and newscasts accusing him of the 45-year-old alleged sexual abuse charges.

“While I was in isolation, I’m a guy who works 12 and 13 hours a day. I am a people person and to suddenly have all of that taken away from you and to be put in an apartment in isolation, robbed from anybody.

“I couldn’t even go out in the street because when I would go out someone would recognize me. They would say, ‘Oh, Father Pfleger, are you all right? Is it true what happened?’ I couldn’t take that,” Pfleger said.

Before leaving the pulpit Pfleger told an enthusiastic congregation, “I’m grateful to be reinstated. I commit to you today to bring the healing to the church where so many were hurt and angered over these past five months.”

Pfleger emphasized that, “I am committed to continuing the outreach” of Saint Sabina ministries beginning with the reinstatement of free food and COVID-19 vaccinations at 12 noon, Thursday, June 10, at the church, 1210 W. 78th Place, in McMahon Hall.