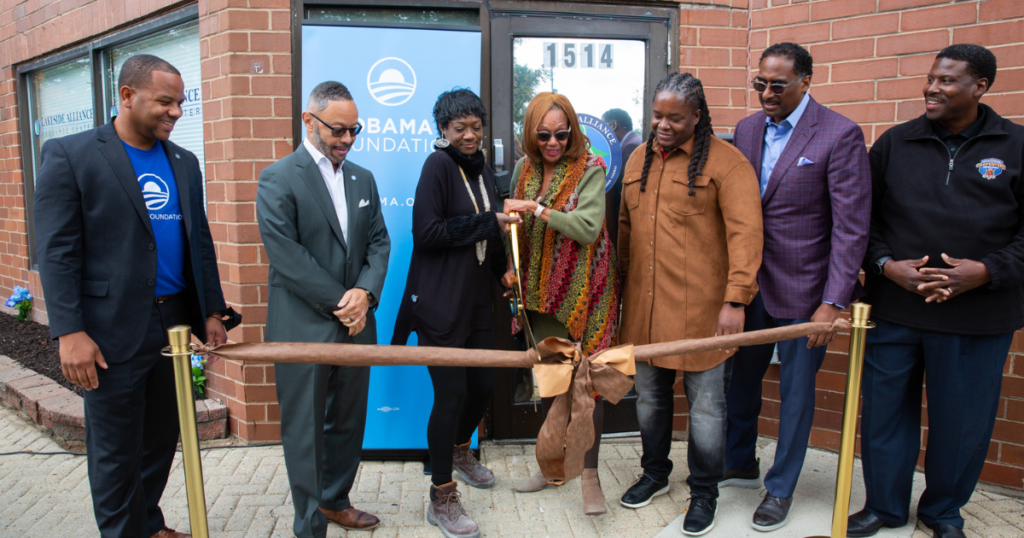 On September 28, 2022, the Obama Foundation and Lakeside Alliance joined elected officials, business owners, and members of the Obama Presidential Center workforce and business communities for a special ribbon cutting to celebrate the opening of the Lakeside Alliance Resource Center in Woodlawn.

The Resource Center is a dedicated space for neighbors in surrounding communities to visit and access information related to the Obama Presidential Center, participate in career development workshops, learn about apprenticeship programs, and meet with representatives from the Lakeside Alliance and the Obama Foundation.

Chicago Alderperson Leslie Hairston, Woodlawn Chamber of Commerce Board Director Marcus Gill, and members of the Obama Foundation were among those who provided remarks noting the impact the Resource Center will have in the South Side community and the opportunity it brings to neighbors interested in construction jobs at the presidential center.

“The Obama Foundation takes our commitment to work with communities on the South Side to create something special with the Obama Presidential Center very seriously. We’ve reached, and even surpassed, our workforce diversity commitment goals with our We Can Build It Initiative, so we know great things are possible when we come together.

The event took place on the anniversary of the Obama Presidential Center Groundbreaking Ceremony in Jackson Park in Chicago, IL on September 28, 2021. Since breaking ground, the Foundation has:

• Announced that it’s on track to meet its ambitious workforce and business diversity commitment goals for construction through its “We Can Build It Consortium”—an initiative the Foundation created to get more local residents involved in the building trades.  To date:

o 52 percent of construction contracts have been awarded to diverse vendors;

o 32 percent of the Center’s early workforce hired live in the South and West Sides of Chicago;

o and 158 candidates have been placed in jobs around the city.

• Completed mass excavation and earth retention, allowing concrete work to begin on the Museum and Forum buildings, in addition to the two-story parking garage.

• Introduced its “On Whose Shoulders We Stand” Naming Initiative, bringing more inclusivity to the traditional process of donor-named spaces—honoring civil rights and social justice leaders whose significant contributions to society advanced justice and equality in America;

To learn more about the Lakeside Alliance Resource Center and its upcoming career events, visit: www.lakesidealliance.com/resource-center