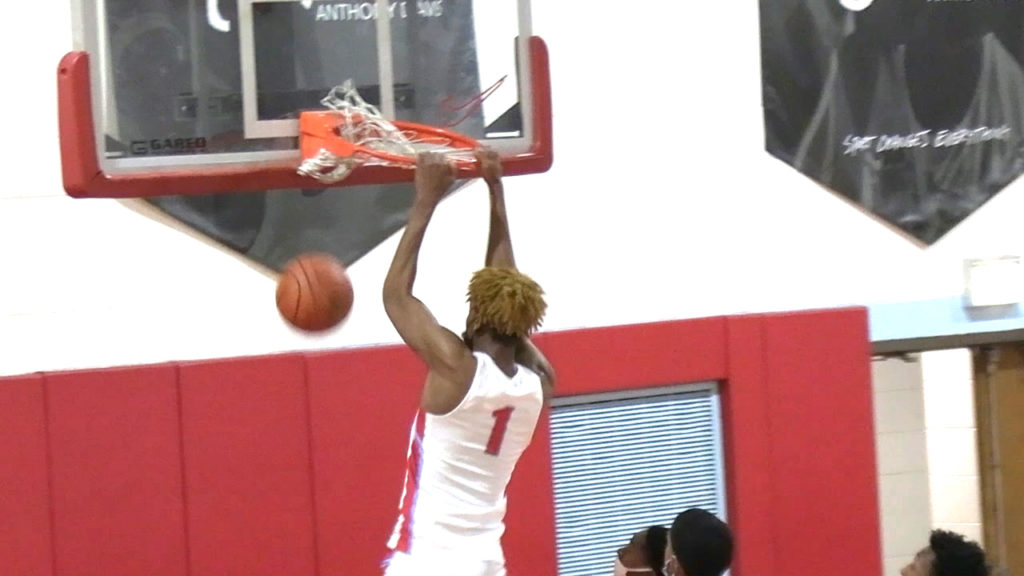 In the Chicago Crusader Game of the Week, the 17th ranked Kenwood Broncos suffered a 72-56 loss to No. 7 ranked Curie in a Public League Red South-Central conference match- up at Kenwood Gymnasium Thursday, March 4.

The Broncos suffered their first loss at home Thursday night after going 5-0 to open the 2021 season. Sophomore sensation JJ Taylor was held to only 14 points, finishing 23 below his season average of 37 points per game.

“We know he is a good player,” said Mike Oliver, head coach of Curie High School about adjusting to Taylor’s play. “We have the same kind of length he has. We put some guys on him around his height [which is around 6’8”]. We had some 6’5” and 6’6” guys to bother him a little bit. And try to knock him off his spot. Our guys play against him all the time, so it wasn’t like it was strange or something.”

According to Coach Oliver, the Condors threw different defensive coverages at Taylor throughout the game, hitting him frequently with double and triple teams.

But Taylor made adjustments through out the evening by finding sophomore teammate Darrin Ames open on the floor. Ames would take advantage of the Taylor double teams by knocking down one open shot after another. Ames exploded for 13 of his game-high 19 points in the first half.

Ames would also score his 19 points in a combination of ways. This included breaking down his man off the dribble on defense and draining two clutch three-pointers in the early half.

In the second half, the Condors were led by the hot shooting of guard Cassius Brooks. Brooks scored a team-high 18 points in the victory.  Most of Brooks’ points came on put-backs and layups in the second half.

“That’s about our team being young,” said Mike Irvin, head coach of the Kenwood Broncos about his team’s young starting lineup and surrendering a 29-28 halftime lead. “We know our best player is a sophomore. A few of us got into foul trouble, and Curie went on a run in the second half and we didn’t respond.”

“Curie’s ranked 7th for a reason,” Irvin said. “Their team has been together throughout this pandemic. We got off to a late start this off season and I’m still trying to figure out the players on our roster.”

Irvin attributed his team’s second half performance to youth, inexperience and growing pains.

Irvin stated his team still needs time to grow and in time his team will grow stronger.

“You know, young teams get stronger as they grow,” said Irvin. “So right now, we got to keep trying and hopefully we learn from our mistakes so that we can get better [in the long run].”

The Broncos were outscored 44 to 27 to close out the game.

With the loss, the Broncos are now 1-1 in conference play.

Cassius Brooks, Curie, finished with a team-high 18 points for the Condors.