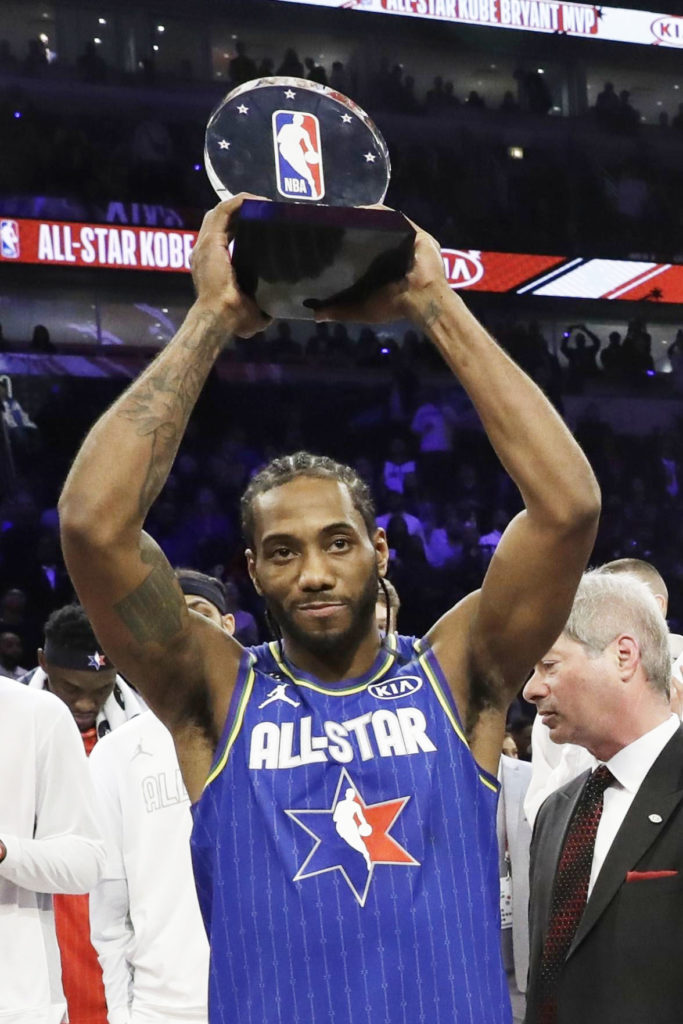 Although both teams made amazing plays throughout the night, the Clippers star was the main star, scoring 30 points and draining eight 3-pointers. Leonard earned the first-ever “Kobe Bryant NBA All-Star Game MVP Award” (the award was renamed in Kobe’s honor).

“It’s very special,” said Leonard after winning the award. “I had a relationship with him. Words can’t explain how happy I am for it. Now I’m able to put that trophy in my trophy room, and just be able to see Kobe’s name on there, it just means a lot to me.”

During the press conference, Leonard mentioned that Bryant was a huge inspiration in his life and that the four-time NBA All-Star Game MVP winner, who perished in an unfortunate helicopter crash in late January, did a lot for him as a friend.

And thanks to an Elam Ending, Leonard and his teammate Anthony Davis would provide the fans with a perfect ending to help close out the show in Chicago.

Over the first three quarters of play, Leonard would carry “Team LeBron” on his shoulders with a series of long distance three-pointers, accurate mid-range jump-shots, and several skilled offensive countered moves that would put any professional NBA defender to sleep.

Leonard’s offensive accuracy and desire to help increase the promised charity contributions did just enough to keep “Team LeBron” within striking distance heading into the fourth quarter down nine at 133-124 to “Team Giannis.”

According to the new All-Star game format, both teams were playing for local charities in Chicago with the winner of each of the first three quarters earning $100,000 for charity.

The fourth quarter was untimed and had teams shooting for a total score — the leading team’s total after three quarters plus 24 points — the “24” in tribute to one of Bryant’s jersey numbers.

Out of respect for Bryant and his competitive spirit, the race to 157 started for both teams with several controversial foul calls due to physical play from both teams and NBA Finals like competitiveness.

Each team played hardcore “man to man defense” on each other like a Bulls vs. Pistons series from the 1990’s—all the way to the final possession.

The intensity from both teams set the stage for a perfect ending, as the hometown kid Anthony Davis made the game-winning free throw. It was dramatic and pressure-packed, because the game had become a situation of “next basket wins.” Davis had two shots, missed the first, and then, with the pressure mounting, drained it.

Afterward, the Crusader asked winning coach Frank Vogel about the event being held in Chicago, and how cool was it to see the hometown kid, A.D., hit the game-winning shot.
“Well, you said it best, right? You can’t draw that stuff up,” said Vogel about A.D.’s game-winning free throw. “Sort of a Hollywood ending to this weekend’s festivities. The local kid wins the game and wins it for charity. I was happy for him. I knew it was going to be a special kind of weekend for him coming home, and to see him win a game like that was pretty special.”

In one of the most competitive skills challenges, three point contest and controversial endings to a dunk contest in NBA All-Star Weekend history, Saturday night’s (February 15) NBA All-Star Weekend event for some fans ended in joy, laughter and sorrow at the United Center.

Sacramento Kings Buddy Hield was crowned 3-point champion. Buddy Hield and Devin Booker took 108, 3-point shots, but it was Hield’s last shot that mattered. He took four of the five money balls on his final rack, ultimately winning by a single point.

“I felt great,” the Sacramento Kings guard said. “Like I said earlier, as a shooter, this is on your bucket list. You have to come in, and you want to win a 3-point shootout. With a stacked field like that, it makes it even better. Pressure is on, and you’ve got to show up.”

The most controversial dunk contest in NBA History:

The last Slam Dunk contest won in this city was in 1988, when Michael Jordan famously outdueled Atlanta Hawks dunk king Dominique Wilkins in an epic battle between two of the greatest showman the league had ever seen.

Jordan won on a controversial finish that night. And there is bound to be just as much future controversy after Miami’s Derrick Jones Jr. edged Orlando’s Aaron Gordon by a single point in a dunk off, after Gordon scored six straight perfect 50s in route to the final. Gordon cleared 7-foot-6-inch Boston rookie Tacko Fall, the tallest player in the league, and dunked with two hands on his final attempt.

It was the last action in what had been a magical night for Gordon, who had lost to Chicago’s Zach LaVine in an epic finish during All-Star Weekend in 2016.

Instead of walking off with the trophy, Gordon felt the sting of yet another questionable finish when the judges awarded him a 47 for his final dunk; with Dwyane Wade, Chadwick Boseman and Bulls Hall of Famers all giving him 9s rather than the 10s he was awarded for all of his previous dunks.

Jones posted four straight 50s of his own until his final attempt in the dunk off, when he scored a 48 after a soaring tomahawk dunk.

Gordon was shocked after seeing his final score, as was the United Center crowd, which was once again treated to yet another all-time great dunk contests in league history.

Ratings for the NBA’s All-Star Game and associated events improved over 2019, bucking a downward trend in the league’s regular-season TV package.

Sunday’s game — which featured tributes to the late Kobe Bryant and changes to the game’s format to up the competitive factor — averaged 7.3 million viewers on TNT and TBS, an 8 percent improvement on the 6.8 million who watched the 2019 contest. Numbers for TNT’s Saturday (February 15) coverage and Friday-night (February 14) events on ESPN and TNT also rose slightly.

The improved ratings for the All-Star Game go against a season-long trend for the league. Regular season games are down double digits across broadcast partners ESPN, ABC, TNT and NBA TV, although recent weeks have shown some positive signs.

In addition to amazing ratings, the two teams wore No. 24 and No. 2, the latter in memory of Bryant’s daughter Gianna, who also died in the crash