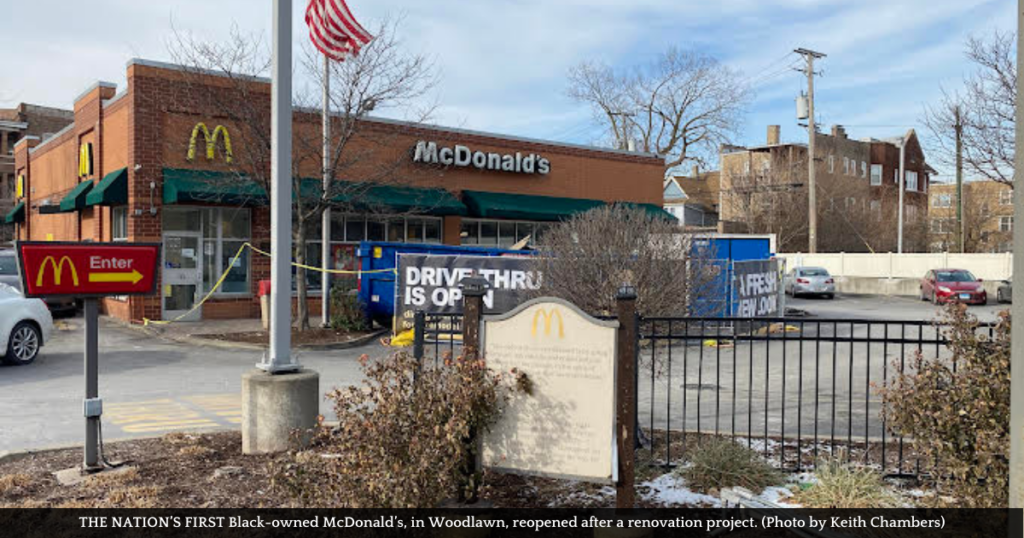 After a months-long renovation project, the nation’s first Black-owned McDonald’s, in Woodlawn, reopened its dine-in service area weeks ahead of schedule with an upgraded look and modernized food ordering service.

It was a soft opening at the McDonald’s at 6560 S. Stony Island, where this year pioneer franchise owner Herman Petty was given an honorary street sign five decades after he bought a white-owned, fast-food restaurant and paved the way for thousands of Black franchisees across the country.

Some 54 years later, the historic Black-owned McDonald’s on Tuesday, December 27, completed a makeover with new kiosks and a new service counter. Patrons stood on new floors and munched on burgers seated in new chairs at new dining tables.

Two days after Christmas, business was slow at the location with only six people taking in the new renovations.

In a telephone interview with the Crusader, owner Yolanda Travis said the renovations were aimed at young customers, including teenagers from nearby Hyde Park Academy High School who often patronize the facility. She said many electrical outlets and phone chargers were installed to allow diners to connect their laptop computers and for “young people to use their mobile devices.”

Travis said the restaurant was expected to reopen the second week of January 2023, and an official grand opening is scheduled in February. One week after the interview, a Crusader staff member discovered the restaurant back up and running; its dining section was closed for at least three months during the renovation project.

The restaurant’s interior sports two, two-sided kiosks where four customers can order their food at one time. The customer service counter is smaller, with two cash registers and an updated menu screen. The layout of the dining room includes new dark gray booths and mustard-colored chairs.

In the back section, the mural that includes Petty and Don Thompson, McDonald’s first Black president and CEO, is still there. But the fireplace is gone. Travis said that section will become a classroom to be used for Black History Month activities. In addition to the mural, Travis said the section will include a large-flat screen television that will showcase interesting facts about pioneering Black McDonald’s franchisees. The section was not open during the Crusader visit.

Travis did not disclose the cost of the renovations. During the project the restaurant’s drive-thru service remained open while the dining section was closed.

One year after McDonald’s iconic Big Mac was introduced, Petty bought the restaurant, on December 21, 1968. It was the first Black-owned McDonald’s in America.

How Petty came to buy the first of his eight McDonald’s restaurants is a story in itself.

Chicago and other major cities suffered as riots erupted after Dr. Martin Luther King, Jr., was assassinated in Memphis in 1968. The Black population in Chicago’s East Woodlawn area was growing amid white flight. Gangs infested the area. McDonald’s, like many corporations, was concerned about its lack of Black managers and executives. Lack of economic opportunities had become an issue for Blacks on the South Side, and throughout America. Unemployment was high, and jobs were scarce. President Richard Nixon in his televised speeches talked about Black capitalism in the wake of King’s assassination.

According to the book, “Building the Black Metropolis: African American Entrepreneurship in Chicago,” McDonald’s came up with a “survival strategy” to weather the storm. The company sent temporary Black managers to manage McDonald’s restaurants in neighborhoods that were filling up with Black residents.

In his autobiography, McDonald’s founder Ray Kroc said he was on a mission to find a Black franchisee in “response to the social change in the sixties” and to advance Black capitalism.

The first would be Petty, a barber, who lived several blocks from McDonald’s and worked as a CTA bus driver at night. With no experience or franchise skills, he saved his money to become a McDonald’s franchise owner.

Petty originally did not own the McDonald’s on Stony Island outright. He co-owned it with Arthur Duplessie and Joseph Greenberg. Both were white investors who originally asked Petty to run the restaurant as part of a “zebra” or “salt and pepper” partnership, according to various reports.

“Salt and pepper” deals were the result of changing urban areas, where McDonald’s restaurants were left in neighborhoods that became predominately Black. These “partnerships” were viewed as exploitative, as white investors and McDonald’s would reap the profits while their Black partner would be relegated to the day-to-day operations of the restaurant.

Petty had a majority stake in his first McDonald’s. His white partners were “found to have quietly included high management fees, neglected to invest in equipment, failed to pay many vendors and suppliers and ultimately” began cleaning out the cash registers each day. Petty’s two white investors were eventually forced out.

According to several books, business at the McDonald’s on Stony Island was not initially doing well because it was in the heart of the Blackstone Rangers’ youth gang territory. Petty said in Harris’ book that after removing the gang members as employees, loiterers in the store became his first priority.

In the book, “Building a Black Metropolis,” Petty said he was able to “safely” remove gangs from his property because he had a relationship with them and their leader, Jeff Fort.

“Because I had a barbershop down the street, I knew everybody in the neighborhood and they knew me,” he said. “I knew the kids, and I knew their families and I was able to get them all out of the store.”

In 1969, McDonald’s hired Roland Jones, its first Black consultant. Jones helped Petty increase sales at his first restaurant by 75 percent in its first year. That same year seven Black businessmen in Chicago purchased the second McDonald’s owned by operators of color. By the end of 1969, there were 12 Black-owned restaurants.

In 2006, Thompson, who first worked at the McDonald’s on Stony Island, became the company’s first Black President and CEO.

Petty died on March 21, 2009, but his legacy lives on through his historic ownership of the first Black-owned McDonald’s.

Last May, Petty was given an honorary street sign at the corner of Marquette Road and Stony Island. In addition to the street name, Petty will also have a room named after him at the Obama Presidential Center in Jackson Park, through a partnership between the Obama Foundation and McDonald’s.