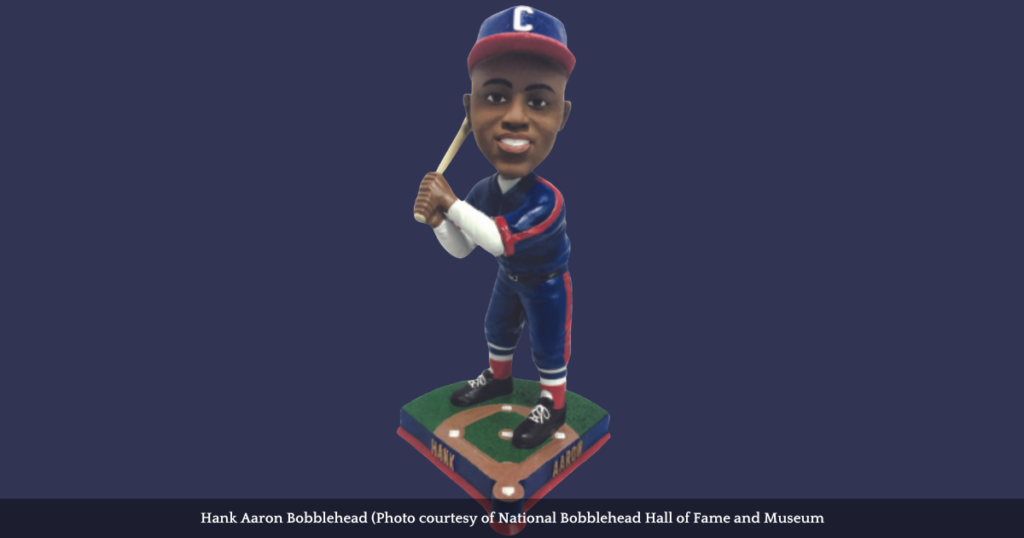 “Hank Aaron will forever be one of the best players in baseball history, and part of that history includes his time with the Indianapolis Clowns,” said Phil Sklar, CEO and co-founder of the National Bobblehead Hall of Fame and Museum.

“It’s important to remember the history of the Negro Leagues, and this special edition bobblehead will help keep that part of Aaron’s legacy alive.”

According to the National Bobblehead Hall of Fame and Museum, Aaron was born in Mobile on February 5, 1934, and spent his childhood in Mobile before leaving to play baseball for the Indianapolis Clowns.

The bobblehead commemorates the time Aaron spent with the Clowns during the 1952 season, his first in professional baseball. The National Bobblehead Hall of Fame and Museum has collaborated with the Negro Leagues Baseball Museum and Dreams Fulfilled to produce a series of officially licensed Negro Leagues bobbleheads, which includes this new bobblehead.

Wearing a blue Clowns uniform with red and white trim and the number five on the jersey, the oversized nine-inch bobblehead features a swinging Aaron batting in the same pose as his first known card, which was a team-issued postcard from 1952. A replica of the postcard is on the reverse side of the backing, which has his Clowns #5 and professional #44. The bobblehead is on a baseball field-base, which has Aaron’s name on the front and “In Memoriam: Feb. 5, 1934 – Jan. 22, 2021” on the back.

The bobbleheads are now available for purchase through the National Bobblehead Hall of Fame and Museum’s Online Store. Each bobblehead is individually numbered to only 755 to commemorate his 755 MLB career home runs. The bobbleheads are $44 each plus a flat-rate shipping charge of $8 per order.

In his 23-year Major League career during which he played for the Milwaukee Braves, Atlanta Braves and Milwaukee Brewers from 1954 to 1976, Aaron recorded 755 home runs. He famously broke Babe Ruth’s career home run record with his 715th home run on April 8, 1974.

About the Negro Leagues:

The first successful Negro League was founded by Rube Foster on February 13, 1920, at the Paseo YMCA in Kansas City. Foster believed an organized league structured like major league baseball would lead to eventual integration of the sport and racial reconciliation. Foster did not live to see his dream come true. Others picked up his cause, and in 1947 Jackie Robinson broke Major League Baseball’s color line.

About the National Bobblehead Hall of Fame and Museum:

The National Bobblehead Hall of Fame and Museum, located at 170 S. 1st St. in Milwaukee, Wisconsin, opened to the public on February 1, 2019. The HOF and Museum also produces high-quality, customized bobbleheads for retail sale, as well as organizations, individuals, and teams across the country. Visit online and on Facebook, Twitter and Instagram.

Dreams Fulfilled was organized to promote the Negro National League Centennial in 2020. Its founder, Jay Caldwell, was selected by the Negro Leagues Baseball Museum as the primary exhibitor for an art and artifact exhibition at the museum between February 1 and May 31, 2020. Dreams Fulfilled exhibited 300 original pieces of art honoring Negro League players and nearly 100 artifacts of African American baseball dating back to 1871. Visit www.NegroLeaguesHistory.com or www.facebook.com/NegroLeaguesHistory.

About the Negro Leagues Baseball Museum:

The Negro Leagues Baseball Museum (NLBM) is the world’s only museum dedicated to preserving and celebrating the rich history of African American baseball and its profound impact on the social advancement of America. The NLBM operates one block from the Paseo YMCA where Andrew “Rube” Foster founded the Negro National League in 1920. In 2006, the NLBM was designated as “America’s National Negro Leagues Baseball Museum” by the United States Congress.