Mrvan, other Democrats stump at Get Out the Vote Rally hosted by Senator Melton 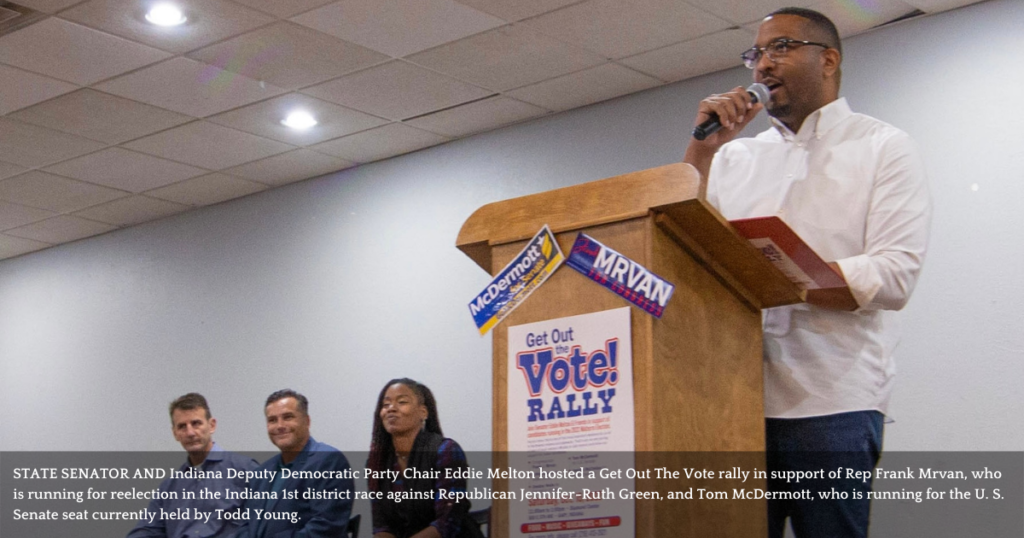 A full slate of Indiana Democratic candidates turned up in Gary on a busy campaign Saturday to urge supporters to rally voters, knock on doors and vote against Republican lies and extremists in an event hosted by Indiana Deputy Democratic Party Chair, Senator Eddie Melton.

“We may be making history today, right here in Gary, Indiana,” said Senator Melton. “This is the very first time that any of us are aware of, that the city gets to host the top tier of the Indiana Democratic Party’s ticket at the same event. It is an honor to share the stage with them all.”

The American Rescue Plan gave the mayor, the council, the administration, the ability to have resources to invest in Gary, Indiana,” Mrvan added. “It allowed us to get kids back in school. It allowed GlenEva (Dunham) to have a safe place to teach because we were able to change HVAC systems, we were able to eliminate bacteria and viruses so that kids could get back to school and parents could get back to work.”

Gary native and long-time activist GlenEva Dunham serves as president of the Gary Teachers Union, Local 4, after years of working up through the ranks. She is also the president of AFT Indiana, a state federation with more than 4,000 members in 24 local unions.

Mrvan continued, “Gary, Indiana received $53 million dollars. The School City received money. Now how we implement that — with infrastructure, community safety — that’s vitally important and what I believe is that’s what the local government should be doing. They should be prioritizing that,” he said.

The American Recovery Act, championed by Mrvan, brought over $1.28 billion in funding to help Indiana communities through the pandemic. As co-chair of the Steel Caucus, Mrvan shared that the group has one mission.

“So, when we replace roads and bridges and waterways and remove lead pipes to have clean drinking water, we do that with American made products and American made workers and we continue good union jobs that provide for the middle class,” Mrvan said.

Before concluding, Mrvan warned the audience about what would happen if his opponent, Jennifer- Ruth Green defeats him. Green is an U.S. Air Force veteran, a staunch pro-life advocate, California native, and a recent NWI transplant attempting to flip Indiana’s 1st District red.

“Gary will be forgotten if you put it in the hands of a Republican that will absolutely positively do one thing,” he said. “They will advocate for the top 1% because that’s what they have proven to do and they will also advocate for the rich and go back to trickle-down economics and you will be left behind, so what I am asking you to do is remember those who have your backs.”

“My wife and daughter have far fewer rights now than women who live just four miles away in Illinois,” McDermott said. “In America, we should not be about taking away women’s rights.  We need to protect rights and that’s what I will vote to do.”

The event was billed as “Get Out the Vote Rally” and organized by Friends of Eddie Melton, who continue their work to promote early voting and build awareness of the midterm election.

Early voting started Oct. 12 in Indiana and residents have until Oct. 26 to request an absentee ballot. Election Day is Tuesday, November 8, 2022.