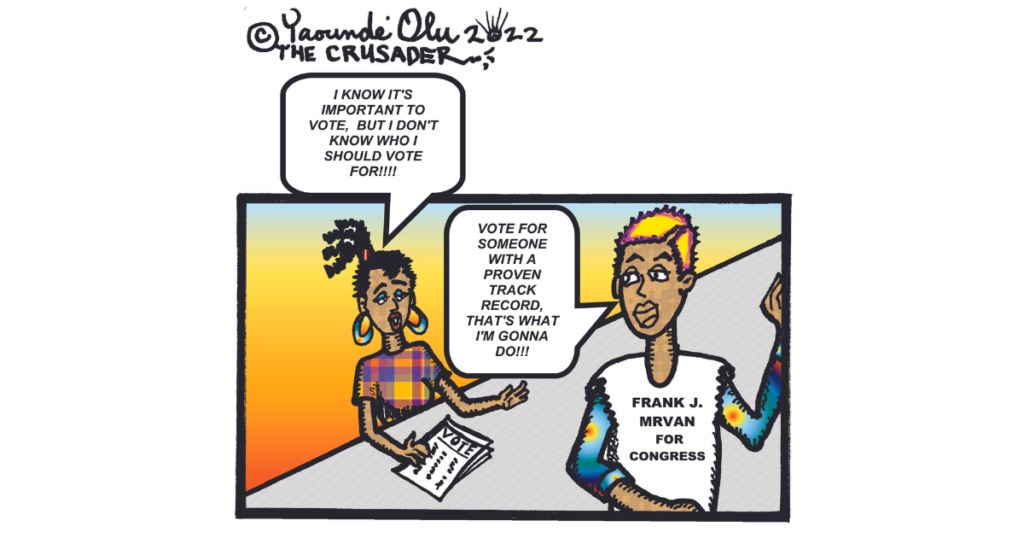 There is only one candidate for the U.S. House of Representatives on the ballot this year who has taken action to support your right to vote, and that candidate is our Democratic member of Congress Frank J. Mrvan.

We see it in the headlines all the time. When the state re-draws precinct lines, and reduces polling locations, and makes it more difficult to register to vote, this is a direct assault on the voice and the rights of the ability of minority populations to exercise our right to vote.

And we see it all the time with gerrymandering. When the dominant political party of a State Legislature re-draws the lines for the districts of elected officials and only considers political parties—and makes a direct decision to split up or utilize minority communities for political purposes—that is a direct affront on our ability to use our voice at the ballot box.

We also see it all the time with the countless mailers that hit our mailboxes and video commercials that run during the news. Outside spending, including money from dark-money groups that do not report who their donors are, are the ones trying to buy the Congressional seat of not just the First District of Indiana, but Congressional seats across our nation.

Enough is enough. In 2013, the Supreme Court gutted protections of the Voting Rights Act. Democrats in Congress, including Frank J. Mrvan, supported the Freedom to Vote: John R. Lewis Act, which restores and strengthens the anti-discrimination enforcement authorities of the Voting Rights Act. This legislation also takes actions to improve voter access and campaign finance reforms.

We encourage all readers of the Crusader to make a plan to vote in the 2022 election and make sure your voice is heard. Your vote and your voice are more valuable than all of the outside spending that is pouring into our region to try to buy your vote.