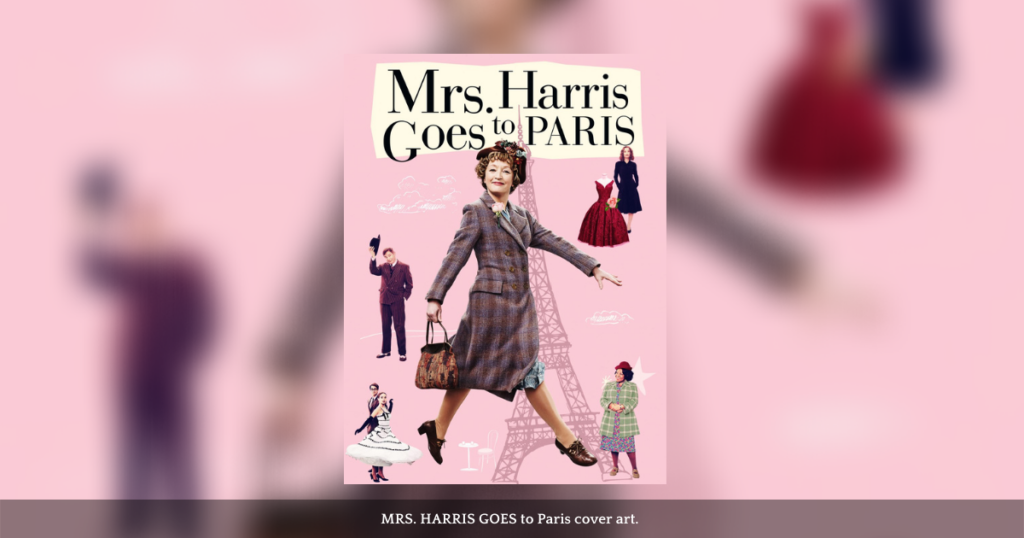 “Mrs. Harris Goes To Paris” is a sweet film playing on the Peacock Network that many folks may have connected to their Xfinity Internet accounts.

In 1950s London, a widowed cleaning lady falls madly in love with a couture Dior dress, deciding she must have one of her own. After working to raise the funds to pursue her dream, she embarks on an adventure to Paris that will change not only her own outlook—but the very future of the House of Dior.

Lesley Manville plays Ada Harris, and Ellen Thomas plays Vi Butterfield, her Black bestie. I mention Vi’s race to illustrate the pact and friendship that the two women share—even in the 1950s.

They go about their days working and at night playing bingo and going to clubs—having a bit to drink and flirting with the male customers.

Ada’s boss treats her poorly and in a condescending manner, with her owing Ada for many weeks of work.

The two women also place bets on the dog races. At one point, Ada wins and sees this as her chance to pack up and go to Paris to bid on a couture gown of her choice. Vi is 100 percent in her corner and wishes her well on her journey.

When Ada finally arrives in Paris to visit the Christian Dior fashion house, she is spurned at the door because she is a simple working-class woman and asking about buying a “frock.” She is not fabulous like the other women arriving for this ostentatious event.

She gets into the fashion show as the guest of a thoughtful, wealthy benefactor who placed her right in the front row. She had about 500 plus pounds—a currency that was accepted in Paris at the time.

She’s sitting next to a snooty mother-and-daughter team, and the woman outbids her on the dress of her dreams, which is titled Temptation. Classism is permeating all through the room, as other well-groomed women cast their eyes and aspersions upon Ada. After all, she’s sitting next to a well sought after distinguished bachelor. So, Ada chooses another dress that is titled Venus, but she has to shelter in Paris for two weeks to wait for it to be made.

What ensues while she is staying at a new associate’s home is her hand at matchmaking and her expert skills in averting a strike of the seamstresses who work at the fashion house. Her interference compelled Dior to make dresses for ALL women.

She finally arrives back in London, and Vi and her handful of friends are pleased to see her because she had been working in Ada’s place—so Ada wouldn’t get fired.

With a beautiful gown in hand but no place to wear it, Ada sulks for a bit until she generously loans her prized possession to a younger friend to wear to an event. Then catastrophe strikes. The dress is ruined, but the goodness of her Parisian friends saves the day for Ada.

Eventually, all is well, and Ada and Vi attend the local, neighborhood Legion’s gala and dance the night away.

Look for “Mrs. Harris Goes to Paris” on Peacock or at a local theatre. The film has been nominated for a British independent film award for best costume design.