Mother of 7-year-old Jeremiah Moore: “You took my son, but not his soul” 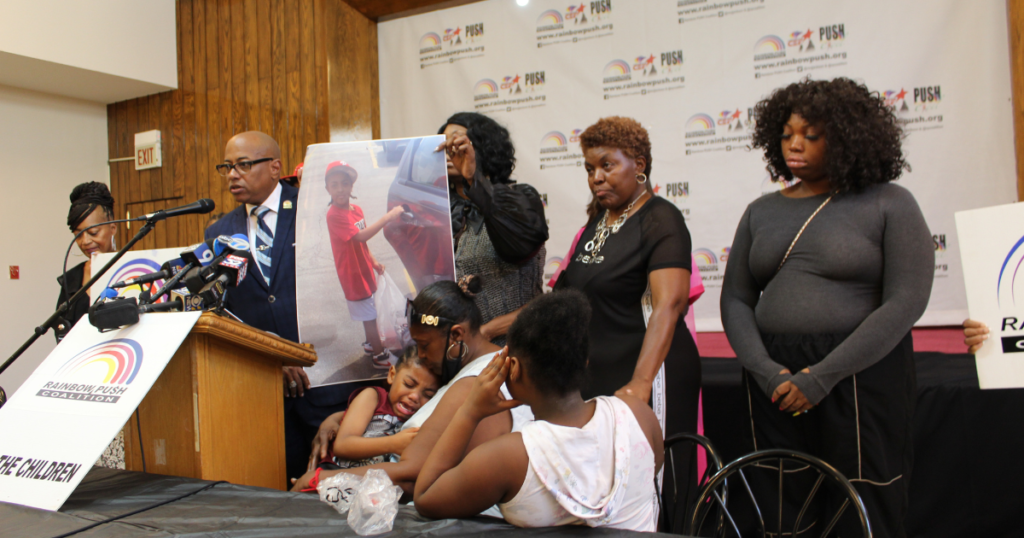 Surrounded by the family of 7-year-old Jeremiah Moore who was fatally shot last Tuesday, July 12, Bishop Tavis Grant, national field director for the. Rainbow PUSH Coalition, on Wednesday called on the East Chicago, Indiana, law enforcement officials to find the shooters who took the life of an innocent child who was asleep in his parent’s van just minutes from his home.

Before beginning the press conference, Grant had his daughter-in-law, Rev. Kianna Horton Grant, to pray. He then held up a large picture of Jeremiah standing by a car. “Just weeks ago, he celebrated his seventh birthday, too young, too soon, and too precious, and those responsible for his murder must be brought to justice,” Bishop Grant said.

Ollie Holliness said, “They may have taken Jeremiah, but they can never take his soul. His death has left a big hole in my heart that can never be filled.” Holliness joined Grant in calling for justice for Jeremiah.

“We cannot have communities that are havens for those who perpetrate these kinds of crimes, and our silence cannot give consent,” Grant told reporters. When Jeremiah was shot, he was asleep in his parent’s van on his way home from visiting his grandmother Electa Bey.

Grant referred to Jeremiah’s funeral, which will be held Friday, July 22nd, 10 a.m., at the Abundant Living Christian Center, 14540 Lincoln Ave., Dolton, Illinois, with funeral services at 12 noon. “This is unacceptable,” Grant said. “He just had a birthday, and now his parents are burying him.”

Ticking off a number of mass shootings including Highland Park and in Gary and now young Jeremiah losing his life, Bishop Grant said, “We will not have our communities become places where we are held hostage by fear and by street terrorism.

“There is no logical, moral reason why Jeremiah should not be alive and well. This kind of behavior must be brought to light, and these individuals must be brought to justice,” Grant said. He called on the East Chicago Police Department, the Lake County Crime Task Force, the Indiana State Police to put a full-court press of law enforcement to find those responsible for the death of Jeremiah Moore.

Bishop Grant said this family moved from Chicago to escape the violence to East Chicago, Indiana, he described as “a community of families with 31 different cultures, half the size of Hyde Park, thinking they would be in a safe place.”

Both he and Dr. Whitaker called for wrap-around services for the family especially the children, some of whom were silently crying throughout the press conference.

Bishop Grant also called for those who know who the killers are to come forth. “Silence provides the killers a sense of exoneration if not anonymity. It is unacceptable. It’s immoral. It is not our best as our community. We are urging something who knows something to say something and be responsible and recognize that Jeremiah and Ollie represent all of us.”

Later, in an interview with the Chicago Crusader, Holliness, 30, who is six-and-a-half months pregnant with her sixth child, said she moved from the South Side  of Chicago because of the city’s violence. “I felt like the city of Chicago wasn’t safe; so, we left the city because of the violence, and we ran right into it.”

Asked if she were driving, Holliness said her husband was driving and that he is “destroyed” over Jeremiah’s death. He is not the biological father of Jeremiah, but she said he raised him as if he were his son.

Holliness first saw the red Charger at the gas station they had stopped at earlier. While just 30 seconds from arriving to their home, bullets were fired from that car, one hitting Jeremiah in the back of his head.

When asked if there was an incident of road rage or a conversation between the driver and the father of her children who was driving the van. “No, there was no road rage and no conversation,” she stated. “I passed the car up on my way home before I stopped at the gas station, and then the car came back around flying and went around the block of the gas station.

“As I was exiting the gas station, I saw the car again but didn’t think anything about it. Once I left the gas station, it went down the next block. I thought it was just neighborhood people on their way home,” she said. The shooting occurred between 1 or 1:30 a.m., July 12th.

Back in October of 2021, Holliness took an examine to become a policeman but failed. She applied to retake the exam only to find out she was pregnant again. “I am going to take it again to make my community feel like they can talk to me and to help families get justice for the loss of their children,” she told the Chicago Crusader.

“I want my community to know that police are there to help them,” Holliness said. She has vowed to get justice for the death of her son and to help others who have lost their children to gun violence. “This shooting just triggered me more to become a police officer,” Holliness said.

Asked if she had a message to tell the shooters, Holliness said, “You may have taken my son’s body, but you will never take his soul. They can’t take the memory of him, and they are going to pay for that,” she said.