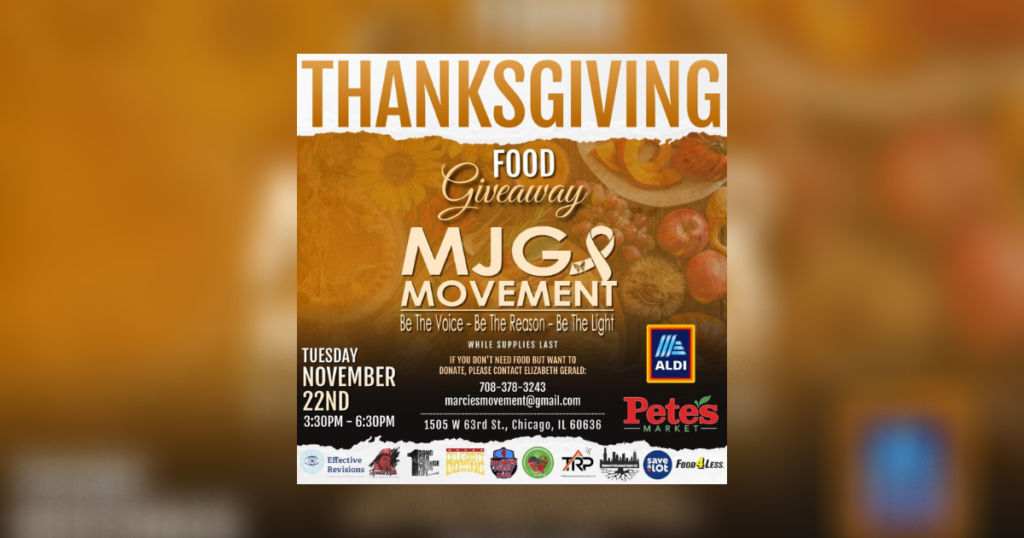 Tuesday, November 22, 2022 the MJG Movement will hold a Thanksgiving Food Giveaway from 3:30 p.m. – 6:30 p.m. at 1505 W. 63rd Street in Chicago while supplies last.  The MJG Movement was founded by Elizabeth Gerald to honor her daughter Marcie Jones Gerald,  who was the victim of brutal sexual assault.  The MJG Movement works with individuals and families dealing with suicide, mental illness, sexual assault, domestic violence, and bullying. The organization operates under the mission to, “Be The Voice – Be The Reason – Be The Light.”

Elizabeth Gerald’s daughter Marcie was a 14-year-old honor roll student at Homewood-Flossmoor High School with dreams of going to Harvard University when she was brutally raped and attacked by a convicted rapist who had recently been released from prison. Marcie suffered from post-traumatic stress and depression, compounded by going through the trial.  She took her own life at the age of 15.

Elizabeth Gerald then founded the MJG Movement to advocate for and help sexual assault victims, domestic violence victims and help with suicide prevention and mental illness.  They offer counseling, refer doctors, find housing, get orders of protection, and advocate in court when needed. Gerald herself provides motivational speaking and educational workshops to mentor and empower victims and their families.

In September 2022, Elizabeth Gerald was presented the Presidential Lifetime Achievement Award from the White House for her work as founder and CEO of the MJG Movement.  In December 2021, Gerald spoke before Congress to get Marcie’s Law passed, which would prolong a rapist’s time in jail by upgrading the charges to murder/manslaughter if the victim commits suicide as a result of the sexual assault and/or rape of the convicted perpetrator.