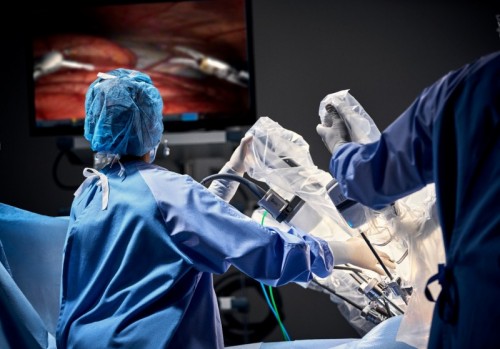 The Centers for Disease Control and Prevention is renewing its focus on healthy lungs with a fresh set of advertisements featuring former smokers. While quitting smoking goes a long way, sometimes surgery is unavoidable. But what used to be a big undertaking with a long recovery is now much simpler thanks to a minimally invasive surgery for serious issues within the chest offered at OSF HealthCare.

Dr. Ronald Cossman, a cardiothoracic surgeon with OSF HealthCare Cardiovascular Institute, has been performing robotic thoracic surgery at OSF HealthCare Heart of Mary Medical Center in Urbana since 2017. Dr. Cossman only has to make several tiny cuts in the chest to use the da Vinci robot to operate on things like tumors. Traditionally, doctors have to make a large incision in the front or side of the chest, causing more painful recovery for the patient.

“This has been a great thing for the patients because it’s a much easier thing for them to recover from, and we’re able to offer them the same results that we get with open surgery,” Dr. Cossman said of the cutting-edge robotic surgery. “We’ve been doing this for a long time here. We do it very well, and we do it frequently.

“The big advantage of doing these operations less invasively with the robot is having done less damage to the chest wall,” Dr. Cossman continued. “Because we’ve done less damage to the chest wall to get in to do the operation, it’s much easier for patients to recover after surgery. We find that they have less pain. The pain is more short-lived. They have fewer complications afterwards, primarily because they’re able to do a better job of recovering more quickly from the operation itself.”

Cossman said the OSF HealthCare hospital where he practices was the first in central Illinois to offer the robotic thoracic procedure.

“When we do operations less invasively than the standard way of doing them, we’re always concerned that we’re going to be able to get the same results as we would with an open procedure,” Dr. Cossman said. “We’ve been able to definitively demonstrate that these minimally invasive operations have just as good outcome as the maximally invasive operations. And so we’re able to offer these to people and assure them that they’re going to have just as good result but with less pain and easier recovery.”

Patients or their caregivers who think they may be a candidate for robotic thoracic surgery should contact their OSF HealthCare provider or visit OSF HealthCare’s website.