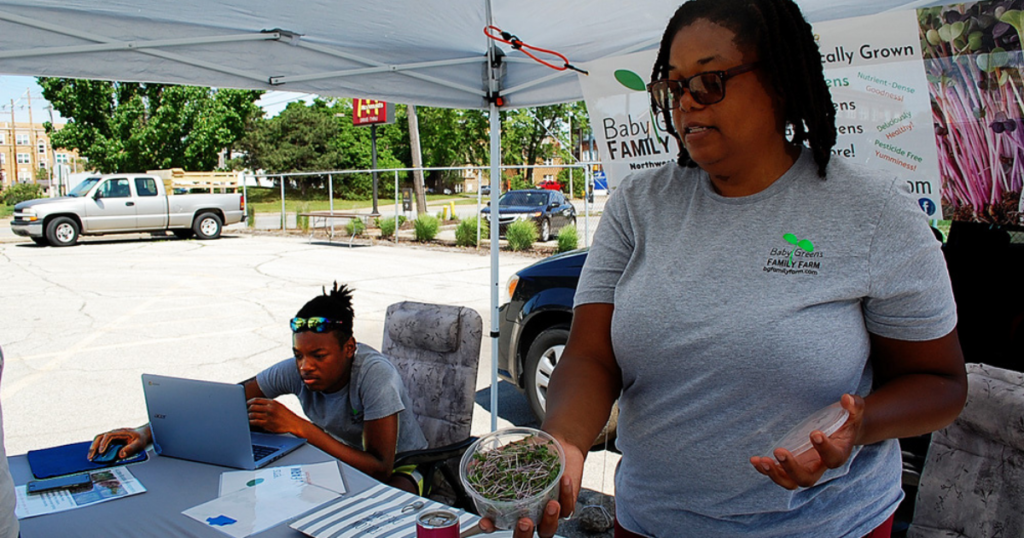 Eight years ago when Progressive Community Church, 656 Carolina, started a garden on a vacant lot next door, the congregation saw it as a way to invest in their community and help their neighbors. The church had joined the urban farm movement.

Pastor Curtis Whittaker recalled those early years while setting up a stand at the Methodist Hospitals’ Farmers Market in early June, “God gave us this vision 8 years ago to understand where our food comes from. It has since grown into food is medicine, food is life; the closer you are to where your food is grown, the better off you are.”

It’s a story of how necessity became the mother of invention. The Emerson area and most neighborhoods in Gary have lost their grocery stores because of declining population. Four full-service grocery stores remain within the city’s 50 square miles.

The church garden started off growing greens, cabbages, tomatoes, cucumbers and pickles, squash, beans, peppers, and herbs – vegetables that do well in northern Indiana’s growing season. They built a hen house. They planted fruit trees and added beehives. Hoop houses were added for more crops and extended the growing season.

The church garden has a name — Faith Farms and Orchard. It is the major arm of Faith CDC, boasting a 10-month growing season and harvesting 15,000 pounds of produce a year.

Faith Farms will be at all of the hospitals’ farmers markets this summer. Ten are scheduled, June through September. The farm is a member of the Gary Food Council, a group of Gary residents and organizations who are tilling soils, growing produce in backyards and vacant lots. Whittaker said 12 Gary farmers have signed up to sell their produce at the hospitals’ farmers markets.

Methodist Hospitals began its farmers markets in 2014, about the same time Progressive Community Church started its garden. Produce sold at the markets came from the hospitals’ food providers. “This year, we decided to broaden our scope and include Gary farmers as sellers,” said Amy Grzyb, Director of Food and Nutrition for Methodist Hospitals.

Whittaker said Faith CDC sourced all the produce for the hospitals’ farmers markets in 2021. Faith CDC didn’t grow the vegetables and fruit, but went out and purchased foods from northwest Indiana farmers.

The partnership with Methodist is a big accomplishment for Faith CDC. “I thank Methodist Hospitals for providing a place for farmers in Gary to sell their produce and for farmers in northwest Indiana to source their produce,” Whittaker said. “For me, our next step is ‘before a farmer puts a seed in the ground, it is already sold’.”

Whittaker wants more community partners, like the schools and casinos. “We are looking for good community partners willing to work with us, pouring money back into this community which is sorely needed. To put dollars into our neighborhoods, so our young people can see they can have a business in food.”