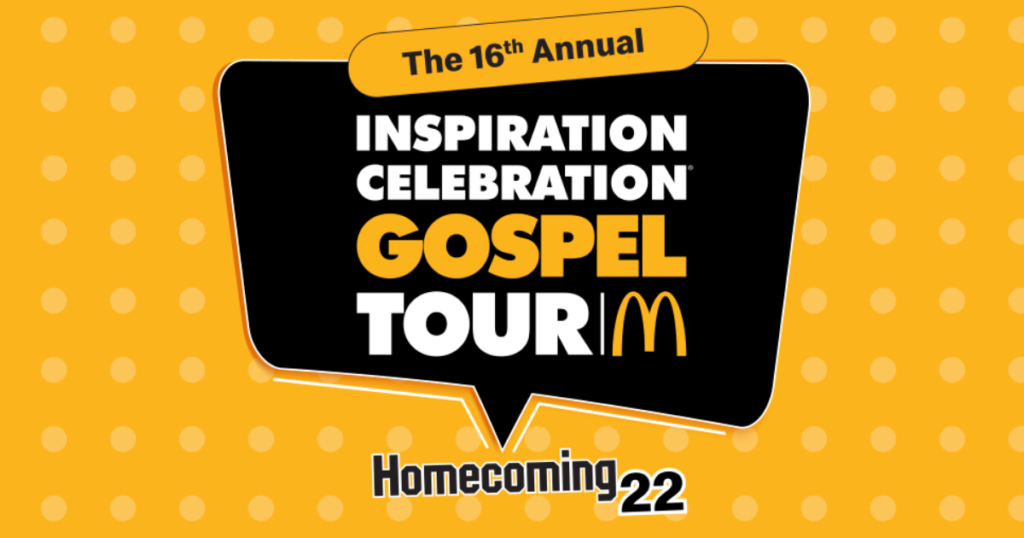 There will be five in-person concerts in five cities. This free concert series salutes the spirit of the homecoming tradition with renowned Gospel artists and HBCU performances.

Pastor Norful is an award-winning recording artist, world renowned educator, author, and visionary who has reached the heights of success in both music and ministry. With a music career that has spanned two decades, Norful now brings his music and ministry efforts toward global humanitarianism. As an internationally known musician, music composer, producer, and singer, Norful’s 2002 solo debut release “I Need You Now” catapulted him to worldwide recognition.

Since that time, he has found commercial success with five No. 1 Billboard Albums and numerous awards. Norful has also been inducted by his home state’s Arkansas Black Hall of Fame, and he has headlined the McDonald’s Inspiration Celebration® tour three times since its inception.

“Gospel Music has always been the heart and soul of the Black community. Our sound… our rhythms, our original hymns have sustained the community for generations,” said Pastor Norful.

“It is a blessing to be back performing live on the Inspiration Celebration® Gospel Tour and to be in devotion with some of the greatest artists in the industry.”

Times, Hamilton literally poured blood, sweat, and tears into his latest album released last year, “Love Is the New Black.” After initially pursuing a more political-leaning direction, he shifted focus to speak to this hefty emotional need, while also covering the full spectrum of human emotions.

“Going through the pandemic, we were faced with challenges, in general,” he states in his press notes. “Then, we were attacked, slaughtered, and slain. In the beginning, the music was really for people who wanted to stand up in honor of Black Lives Matter. It was initially geared toward those souls, hearts, and the people we had lost. There were some really heavy and strong songs on there.

“As the world started to open, I wanted to lessen the heavy load and allow everyone to celebrate again. We still got a little bit of that, because it’s not going away, and we’ve gone through a lot. That side will be heard, but we’re taking from a bunch of experiences now, getting through it, and taking a turn. I feel like that’s what people need right now.”

In an interview with the Crusader, Hamilton said that in addition to the Chicago performance, he will also perform in a couple more upcoming cities during the tour.

Hamilton’s song “Something About The Name Jesus” is a favorite of mine, and Hamilton assured me that he had a strong spiritual background and grew up in the church. “I like to think about faith or faith-based in a lot of my songs. I know I do music for family and kids to be able to hear it. Whether breaking up or finding true love, the ultimate foundation and the security in those stories and in my life has been God. And I like to speak about that.”

He added: “I love what Rance Allen did to it and it touching my soul and being one of my favorites, and I wanted to try it myself. We praise God on my shows.”

When asked about the melding of Gospel music aimed at non-Gospel audiences, he said: “I don’t think that is the intent. What I represent is just as real as Gospel. We all don’t walk around in a Holy bubble. I can speak from a human point of reference and give praise to God.”

He added that although he has won a Grammy, the NAACP Award was “absolutely beautiful and what it represented.”

Hamilton enjoyed the Chicago leg of the tour and was glad to be included: “The fact that people see me and who I am and what I represent and the spirit that is in me. I am glad for being acknowledged for that and for the opportunity to help raise money for the local Ronald McDonald Charity chapters and being a part of history.”

He promoted his grits, cornbread and grape juice food items, which can be found at www.hamiltoncornerstore.com. “If you love Jesus, you gone love my grits. It’s the best grits and cornbread alive. Quaker ain’t got nothing on me,” Hamilton said with joy.

The McDonald’s Inspiration Celebration® Gospel Tour is one of the many company initiatives that feed and foster the community and inspire excellence. 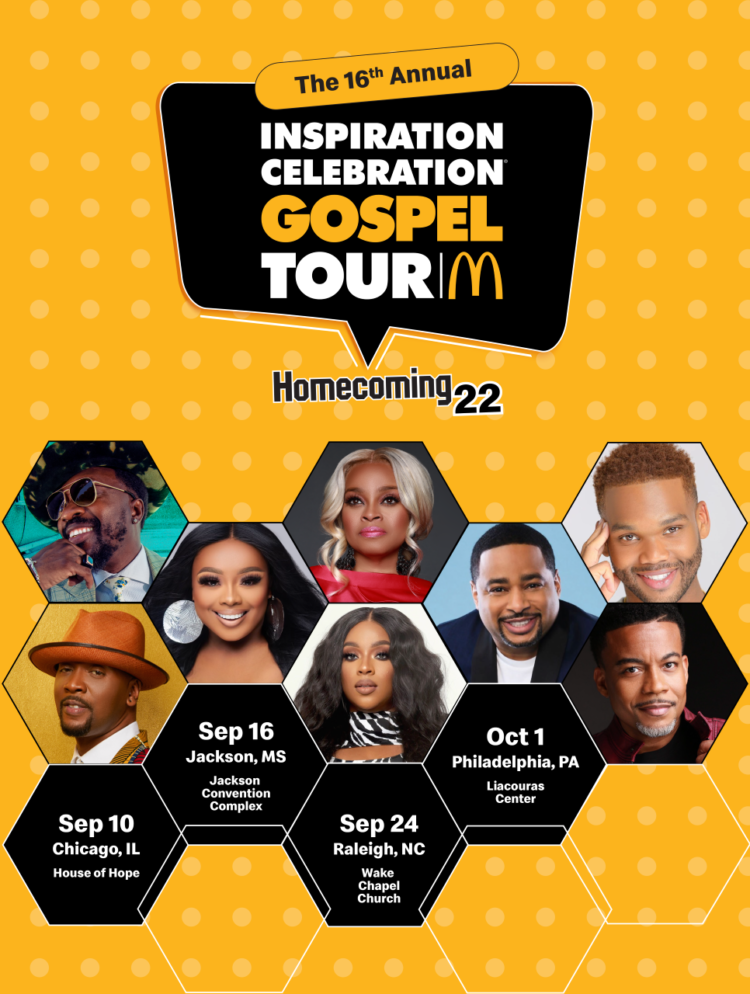 Legendary singer, songwriter, and producer Donald Lawrence resumed his role as music director and, for the first time, social media personality and comedian Karlton Humes is bringing his unique brand of entertainment to the tour. In the spirit of the homecoming tradition, select shows will feature live performances by HBCU marching bands and gospel choirs.

As in previous years, the tour will demonstrate McDonald’s continued commitment to Ronald McDonald House Charities® (RMHC®). At each concert stop, attendees can donate through a love offering to support families served by the local Charity chapter.

Ronald McDonald House Charities programs help alleviate some financial burdens for families with children who are hospitalized or in treatment; helps families save over $500 million each year in hotel and meal expenses; supports children and families by delivering programs and services in more than 60 countries and regions.

For more information on the 2022 Inspiration Celebration® Gospel Tour, including tour stops and how to garner free tickets, visit www.blackandpositivelygolden.com or on Instagram @WeAreGolden.