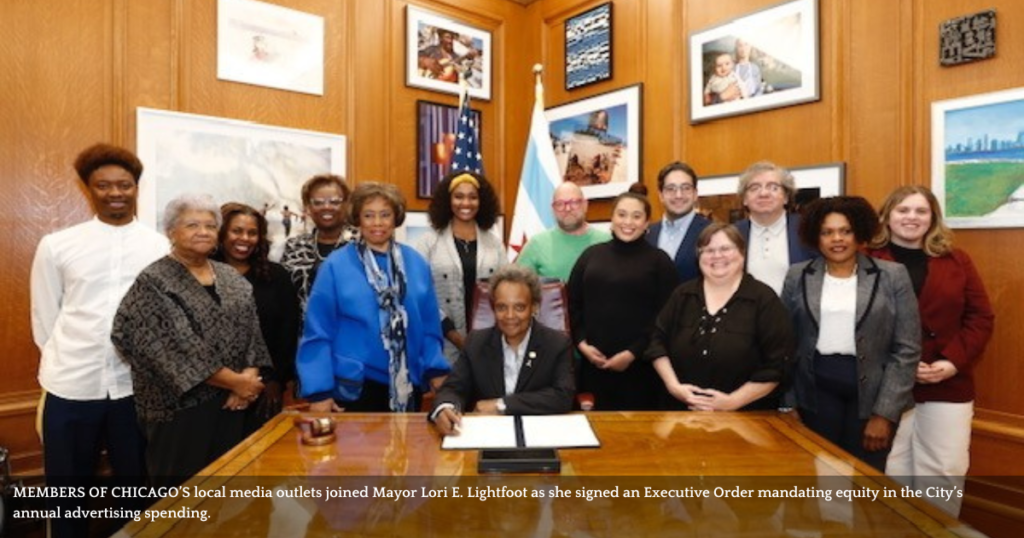 Mayor Lori E. Lightfoot signed an Executive Order increasing the percentage of City advertising dollars spent with community media outlets at a press conference on Wednesday, October 26. The Executive Order, which goes into effect upon signing for fiscal year 2023 and beyond, ensures that residents regardless of native language, race, color, sex, gender identity, age, religion, disability, national origin, ancestry, or sexual orientation can access critical information on City programs and services. With over 400,000 Chicago residents who do not speak English as their primary language and 153 languages spoken in households citywide, the Executive Order furthers Mayor Lightfoot’s commitment to promoting equity and access for all Chicagoans regardless of background.

“Chicago is one of the most diverse cities in the world, and it’s only right that City government honors that diversity by supporting community media outlets,” said Chicago Mayor Lori E. Lightfoot. “Through this equity-based Executive Order, we will ensure that City communications and information on programs are accessible to all of our residents—no matter their circumstances. This effort will also serve as an economic boon for many of our local media outlets and strengthen the City’s relationship with the communities they represent.”

Community media outlets provide a critical pathway to engage residents who may not have access to mainstream information sources due to language barriers or other obstacles. The Executive Order seeks to leverage the diverse audiences of these outlets by requiring all City of Chicago departments to spend at least 50% of their total print, digital, and broadcast advertising budget with community media outlets.

“CIMA is so excited that Mayor Lightfoot is taking this first big step toward creating a more equitable playing field for the city’s marketing and advertising spending,” said  Tracy Baim, President and Co-Publisher of the Chicago Reader Newspaper. “We urge all city, county, and state agencies to follow this lead.”

“Chicago has a wonderfully diverse and robust independent news ecosystem that’s captured the attention of publishers around the country,” said Maple Walker Lloyd, Director of Development & Community Engagement at Block Club Chicago. “We proudly support the effort of the City of Chicago to equitably turn to these newsrooms to reach the people of Chicago.”

In addition to its positive impact on accessibility for diverse city residents, the Executive Order bolsters local media outlets by increasing their advertising revenue in small but significant ways. A similar Executive Order implemented in 2019 by New York City saw nearly $10 million in advertising dollars spread across 220 publications in 36 different languages in its first year alone.

“The Newmark J-school is thrilled to learn that Chicago is following in the steps of New York City and creating a more equitable landscape for community media,” said Graciela Mochkofsky, Dean of the Craig Newmark Graduate School of Journalism at the City University of New York. “The New York City Executive Order, led by the work of our Center for Community Media, allocates government advertising dollars to the myriad of newsrooms serving communities of color and immigrants in New York. This has strengthened the sector, effectively allowing thousands of people to stay informed and civically engaged.”

To ensure compliance and transparency, beginning in FY2023 each City department will submit year-end reports to the Mayor’s Office detailing its annual advertising spending. Data regarding each department’s advertising will be made available to the public through the Chicago Data Portal at the beginning of 2024.