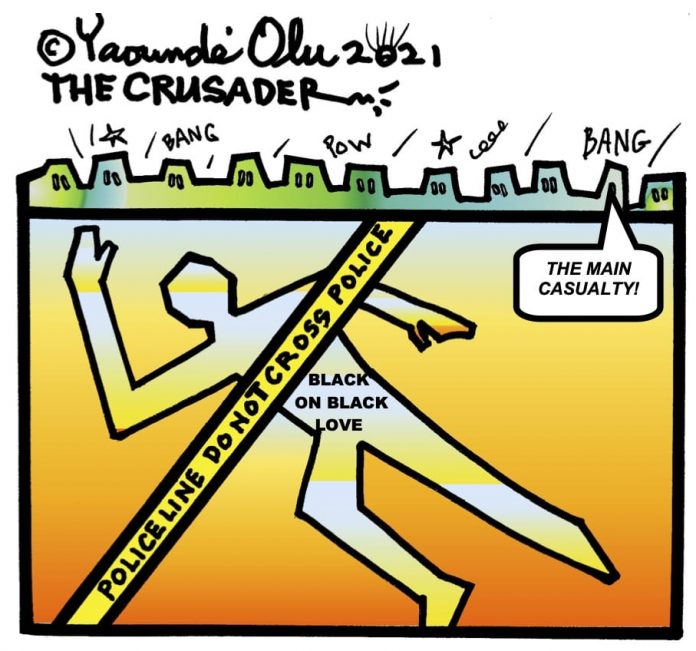 Violent crime is apparently increasing in America, and this is especially true in some urban Black communities. For example, according to an online article in The Hill by Chris Talgo, (opinion contributor), “Chicago, Illinois, is a prime example of this modern American tragedy. The city’s murder rate is among the highest in the nation. Shootings, drug-dealing, carjacking, gang activity, and other categories of crime are at epidemic levels.” Talgo blames this, in part, on government handouts.

Citizens are becoming increasingly alarmed because it appears as though the police are retreating from the mayhem in retaliation of the “defund the police” movement.

To be clear, defunding the police does not mean getting rid of law enforcement personnel per se: it means taking some of the law enforcement funds and placing them in ancillary services to help alleviate problems associated with crime. This might include mental health services, social services, job creation, mentoring programs, and more.

One of the challenges connected with the problem of violent crime, especially with Black-on-Black crime, is the identification of the real causes. They are not clear, though, like belly buttons, everyone has an opinion. Usually, municipal leaders are the first targets of discontent in this regard. In fact, everyone is blamed but the perpetrators themselves.

It is also true that there are societal forces that contribute to what’s happening, in the form of a type of mind control that comes from popular culture in the form of toxic music. The “Clear the Airwaves” project has been able to highlight and oppose the musical filth that is allowed to be played that targets our youth. There is no doubt that life imitates art in this music.

Lest someone thinks that it is accidental that this form of musical entertainment targets a community that seems to be enacting the behavior that is being transmitted, think about this: name the music created by white youth that tells them to hate and mistreat women; that calls themselves by derogatory names, or that tells white youth to kill other white youth!

This is not happening in white communities. Actually, white youth buy this toxic Black music in large numbers, but their behavior does not seem to be impacted by this auditory filth in the same way that Blacks are impacted.

Another thing that causes people to think that the dissemination of this music is deliberately targeting Black youth is the fact that it is far easier to get the smut played than it is to get the clean music aired. In other words, there ARE artists out there creating decent, creative rap music, but the music industry tends to ignore them in favor of the more dangerous musical fare. The issue seems to be, according to some, that demand determines supply. In other words, people prefer the negative music, and that, in turn, drives sales. After all, the music business IS a business!

The question remains – if artists start making and promoting more positive music, will it change the mindset of our youth? If the only thing available to them is music that speaks to the upliftment of the community and its people, would it sell?

Some think no; some think that our society is so skewed toward the negative poles of existence that those creating positive music would not get as much support from the public even if the music is liberally offered over the commercial media. This may or may not be true, but it would be interesting to put this idea to the test.

In the meanwhile, we recognize that there is a plethora of issues that contribute to violent urban crime.

It would be feasible to recognize this reality and attempt to address the problems from multiple directions. Included in these should be attention to the influence that families, i.e., parents have on the problems created by their own offspring!

The deafening silence that is met when crimes are committed in Black communities is probably encouraging a sort of Teflon attitude among Black perpetrators. Community members know that snitches get stitches, and because of this, they are being protected by the same communities that they are victimizing!

Ultimately, the problems in our communities will not be resolved by “others” – we will have to tackle them ourselves. Getting rid of toxic, mind-controlling music would be a good place to start! A Luta Continua.