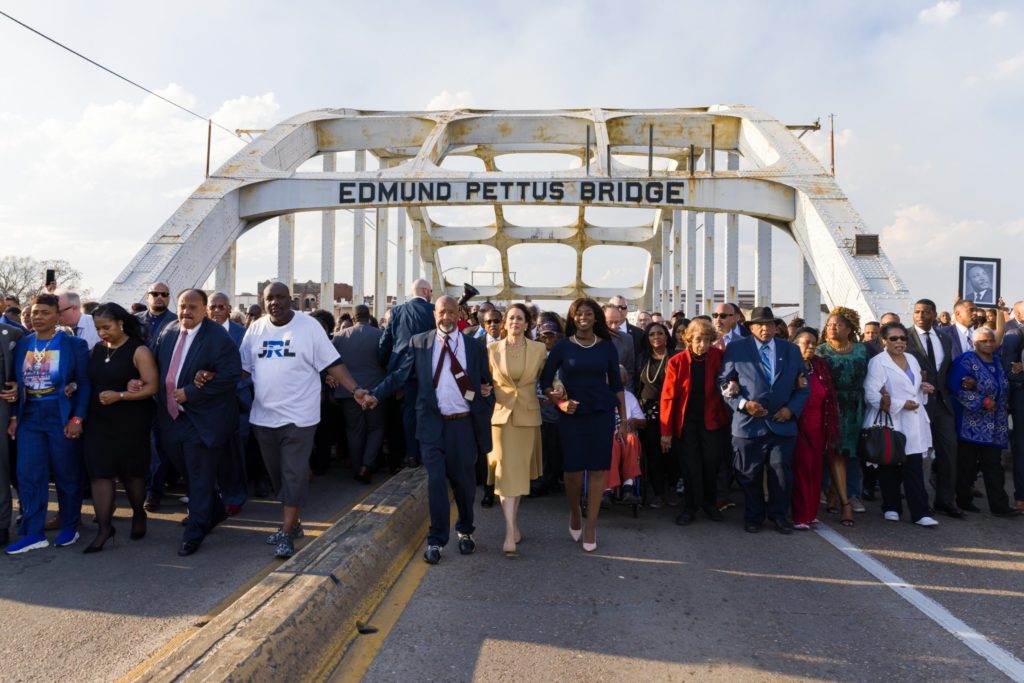 When Reverend Jesse Jackson walked across the Edmund Pettus Bridge last Sunday he thought about the many times he had done so in the past on a bridge named after a white segregationist who advocated slavery and opposed Blacks’ fight to register and vote.

That hatred and white domestic terror hang in the bowels of American history. A shameful example is the 1965 “Bloody Sunday,” 57 years ago when a young, 24-year-old John Lewis was beaten by state troopers who also fatally shot activist/deacon Jimmie Lee Jackson who died trying to shield his mother from billy club-wielding police.

Slavery and the era of Jim Crow may be in the past, but Jackson’s mind quickly raced to the current civil rights struggle that strikingly resembles 1965, the fight to retain the 1965 Voting Rights Act, opposed today by white Republicans who have passed more than 240 laws restricting the right to vote for Blacks and other people of color.

In an interview with the Chicago Crusader prior to a rally at South Side Selma High School in Selma, Alabama, Jackson said those who attended the 57th anniversary of “Bloody Sunday” were a new generation of voting rights activists.

“The times are tough for us. The 1965 Voting Rights Act is now being threatened.”

Jackson was referring to the many bills introduced by Republicans designed to undermine the electoral process by restricting the right to vote by Blacks and other poor people.

So far, Republicans have passed more than 240 restrictive voting rights bills. These include requiring new voter ID rules for absentee ballot applications; obstacles in the use of mail-in ballots; and students registering and voting on campus.

Additional restrictions such as making it a crime to provide food or water to voters standing in line to vote; limiting, or restricting voters with disabilities; or those wanting absentee ballots, threaten the future of voting rights.

As Jackson walked the entire 1,248 feet bridge, he reminded himself of the voting rights’ battles to come during this primary election season. “We have to march and sacrifice again if necessary, including civil disobedience. We must march and vote with passion in these primaries.”

Jackson said students who will turn 18 by November can vote now and urged them to do so and to take advantage of free city college education, which could cut their student debt in half.

As he walked the bridge, Jackson said he thought about the late Representative John Lewis who was beaten in 1965 trying to cross the bridge to fight for the right to vote.

He also thought about Amelia Boynton Robinson who was beaten as well. Jackson said it was she who invited Dr. King to Selma. She died at the age of 104 in 2015, seven years after seeing the first Black president elected.

Earlier, Jackson and Reverend Dr. William Barber, who heads the Poor People’s Campaign, and many other civil rights organizations and students from around the nation joined in marching down a Selma highway. They called for the right to vote without the impediments imposed by Republicans, including an end to gerrymandering districts.

“We are bringing our civil rights family back together,” Jackson said.

Citing the number of African American mayors and other elected officials as progress since 1965, Jackson said, “They want to take it back, but we will not let them take it back.”

During Monday’s, March 6, march along a Selma highway, hundreds of students chanted, “We’re not going to take it anymore.”

One of those students, Eli Terry, 30, from New Jersey, brought his three-month-old dog, Moses, to the Selma march and rally. He too expressed concerns about the GOP movement to restrict voting rights for Blacks and people of color.

Ending Monday’s voter rally at South Side Selma High School, Barber chose freshman Kamiya Bell and urged her to sing. He then encouraged all of the students to tap into their talent pool and continue to push for excellence.

Attorney Barbara Arwine, head of the Transformative Justice Coalition, also urged students to get involved in the battle to preserve the right to vote.

And while some activists want to rename the Edmund Pettus Bridge after late Representative Lewis, Barber on Monday said he would like it to be named “The People’s Bridge” with the names of Lewis and others underneath the banner.

Currently, the name Edmund Pettus Bridge remains a symbol of the South’s racist past, primarily for the horrific March 7, 1965, “Bloody Sunday” clash between civil rights marchers and white state troopers who beat and tear-gassed the marchers.

Last January, Congress passed a bill calling on the citizens of Selma to rename the bridge. Currently, it still bears the name of former U.S. Senator Pettus who was a strong advocate of slavery and a General in the Confederate Army.

Last Sunday Vice President Kamala Harris, the first Black, the first female and Indian vice president, spoke at the 57th anniversary of the 1965 March from Montgomery to Selma, which culminated in the beating of voting rights activists by state troopers on the Edmund Pettus Bridge.

Calling the site of the brutal attack “hallowed ground,” Harris called for the passage of the John Lewis Voting Rights Advancement Act of 2021 (H.R.4).

Comparing 1965 to 2022 and the status of the right to vote given the Republican gerrymandering and scores of voter suppression bills passed, Harris said, “Today, we stand on this bridge at a different time.

“We again, however, find ourselves caught in between. Between injustice and justice. Between disappointment and determination. Still in a fight to form a more perfect union. And nowhere is that more clear than when it comes to the ongoing fight to secure the freedom to vote,” Harris said.