Maestro Riccardo Muti is the gift that keeps on giving 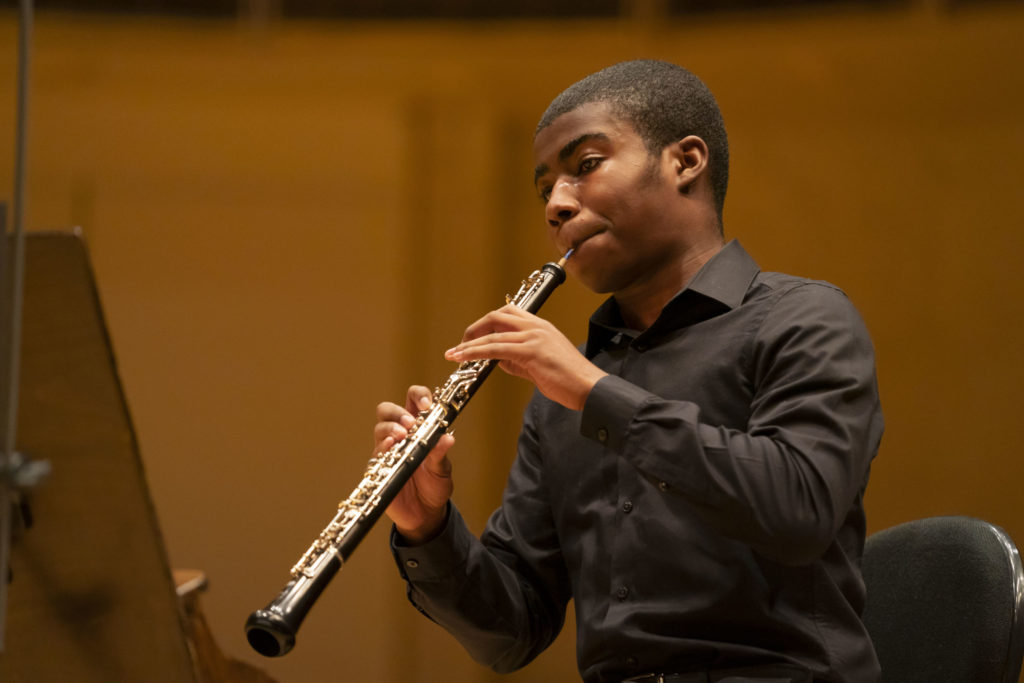 The Chicago Symphony Orchestra’s Zell Music Director Maestro Riccardo Muti recently led a coaching session with two chamber ensembles comprised of fellows from the Chicago Musical Pathways Initiative (CMPI), as well as current and past members of the Civic Orchestra of Chicago and Chicago Sinfonietta Project Inclusion Fellowship, who serve as CMPI mentors. Hosted on Zoom by the Negaunee Music Institute of the Chicago Symphony Orchestra (CSO), the hour-long program featured the two ensembles performing selections from Verdi’s String Quartet No. 1 and Mozart’s Oboe Quartet on the stage of Orchestra Hall at Symphony Center, with Maestro Muti joining the virtual coaching session from Italy.

The free educational program is an extension of Maestro Muti’s ongoing commitment to mentoring young musicians from across greater Chicago, which has also resulted in free open rehearsals with the CSO and Civic Orchestra of Chicago at Orchestra Hall, as well as participation in the CSO’s Chicago Youth in Music Festival.

“In these difficult times, it is important to remember that music can still bring us together,” noted Maestro Muti. “In Chicago, there are now many organizations, including the Chicago Symphony Orchestra, who have a strong commitment to the training of young musicians and this work is essential. The dedication of these young musicians is very inspiring, and I am looking forward to working with them.”

“I am thrilled that five of our fellows will have the opportunity to work with Muti on stage at Orchestra Hall,” said CMPI Director Adrienne Thompson. “I have no doubt that this is an experience that our fellows will remember for the rest of their lives.”

The Crusader was invited to watch the program, and I was thrilled to see Muti in his home studio. I have previously written about his commitment to the young musicians of Chicago—once in 2019 when he was recognized for “his commitment to promoting music as a universal tenet.” During the Zoom, he was his personable self, as he listened intently to the socially-distanced students assembled at Orchestra Hall and gently instructed them on how to improve their performances. I reached out to a few students after their performances to see just how they felt about the experience.

Violinist Esme Arias-Kim said: “Maestro’s instruction was incredibly inspiring. Just seeing how much passion he has for teaching and for the music was eye-opening to me and made me realize how lucky I am to be able to play an instrument and take part in chamber music, which is such a special type of communication and performance.”

She added: “I started playing the violin when I was almost 3 years old. Both my parents are professional violinists, and my sister also plays violin, so music has always been a part of me and my family.” She misses being able to come to the Center. “It was so amazing to come to Symphony Center. I haven’t been here in a year, and it brought back so many memories of being in the hall.”

Violinist Sameer Agrawal shared his thoughts: “I believe that Maestro Muti’s instruction really will have an impact on my musical aspirations. He is such an expert at music, and the ideas, techniques, and details he taught us really could have a big impact on the way we interpret and perform other music in the future.” Agrawal was also young when he started in music. “I first became interested in music when I was very young, when I saw the famous violinist Joshua Bell playing on the TV show ‘Sesame Street.’”

Violinist Brent Taghap says that Muti is a great global conductor and humanitarian. “While we were getting set up, Maestro Muti was talking about how times are really tough right now and the world seems very dark. But culture – and particularly music – is what’s really going to help us put everything back on track.”

Zachary Allen was the featured oboist for the third movement of the Mozart piece. Both performances were lovely, and I noticed that Muti gave Allen, who is a young Black man, a shoutout about his skillset while playing the piece. “When Maestro Muti complimented me, it felt surreal. To receive praise from a musician of his caliber was truly an honor,” Allen told the Crusader, while also thanking his mother for her unwavering support.

Muti advised Allen to put a bit more passion in his playing, and he’s taking that advice to heart. “My main takeaway from Maestro Muti was to do more with the music and truly bring it to life. Going forward, I’ll strive to bring the same energy and passion that Maestro Muti has for music into the pieces I play.”

Allen also started playing as a youngster, joining his elementary school’s orchestra program in the fourth grade. “I started on viola but quickly switched to cello,” he said. “After a few years, I started to lose interest in cello. My mom decided to send me to Interlochen Arts Camp, and while I was there, I heard someone practicing the oboe solo from ‘Scheherezade.’ When I got back, I told my mom I wanted to switch instruments, and I started playing oboe in seventh grade.”

After the sessions, Thompson commented on Muti’s instruction: “It was interesting for it to be put in the context of emotions. You know, talking about jealousy and talking about this section is ‘ha ha’ laughing. I think that those descriptors make it easier for you to see how music can be used to convey and express emotion. And to also help you understand that that’s the whole point that it exists. It’s not just the sounds, but it’s how it makes you feel.”

It was great to see Muti in action, and he was apologetic because he couldn’t travel to Chicago due to COVID-19 restrictions. He did promise the students that he would visit the city as soon as he is safely allowed to do so. And since I have seen these promises come into fruition before, I know that Maestro Muti will make good on his promise soon. He is truly dedicated to promoting music appreciation, whet- her in person or remotely.

Chicago Sinfonietta’s Project Inclusion supports the development of emerging musicians, conductors, and administrators on and off stage. The commitment of Sinfonietta’s founder, African-American conductor Paul Freeman, to eliminating institutional bias due to factors such as ethnicity, race, and socioeconomic status has broadened to tackle matters of diversity and inclusion from every angle.