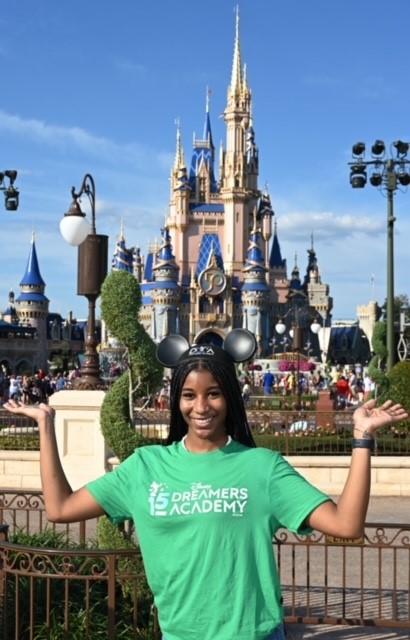 Earlier this month, 100 students from across the country celebrated the conclusion of the 15th year of Disney Dreamers Academy with an emotional commencement ceremony featuring an inspirational speech by four-time Grammy Award-winning singer, songwriter, actress and executive producer Kelly Rowland, musical performances by recording artist Mali Music and Disney Entertainment and a moving ring presentation ceremony to mark the teens’ special achievement.

The teens, or Disney Dreamers as they are called, were selected from among thousands of applicants to participate in the four-day, once-in-a-lifetime educational mentoring program that takes place annually at Walt Disney World Resort.

During the 2022 event, students took part in various events, including:

Kayla Nelson, a 17-year-old senior at Lincoln-Way East High School, lives in Frankfort, Illinois, and was one of the Dreamers, who spoke about her weekend.

“My experience was truly amazing, I connected with a lot of people who all have high aspirations along with amazing characters. We learned a lot about the professions that we want to go in and got a deeper understanding of how everything works. We got to connect with people who can help us get to where we want to be,” she said.

Kayla learned much in the National Geographic (Education) workshop. “We first learned about how the brain works with education. We then talked about the four different types of learning: visual, auditory, reading and writing, and kinesthetic, and how it is extremely important to recognize these learning types for the benefit of students.”

She also said that her group discussed pertinent issues in the education field such as under payment, equity, the school-to-prison pipeline, and the lack of after-school programs.

Kayla mentioned that she was overly excited to meet Rowland. “My favorite speaker was by far Kelly Rowland. I got the opportunity to actually meet her and have a conversation with her. In her commencement speech she talked about how ‘Dreams without goals are just dreams,’ and that really inspired me because she made her dreams a reality and that shows me how I can as well.”

“This is among the most rewarding events we host at Walt Disney World,” said Tracey D. Powell, Disney Signature Events vice president and Disney Dreamers Academy executive champion. “Seeing firsthand how these teens are impacted over the course of a few days is an incredible experience and reminder of why we’ve remained committed to this event for 15 years!”

Created and hosted by Walt Disney World Resort, the program is designed to broaden career awareness and create opportunities for Black students and teens from underrepresented communities across America.

Since its inception in 2008, 1,400 students have participated in the career-discovery journey that is Disney Dreamers Academy. Students are inspired to discover new career opportunities, pursue their dreams and interact with participating celebrities and motivational speakers.

The Disney Dreamers program is an important part of Disney’s commitment to supporting diverse communities, such as Black America, by encouraging the next generation to think big and to carry what they learn back with them, so they can relentlessly pursue their dreams and make a difference in the lives of others.

Along with a parent or guardian, each Disney Dreamer received an all-expenses-paid trip to Walt Disney World Resort where they learned important networking skills, participated in hands-on career workshops and created fun memories to cherish for a lifetime.