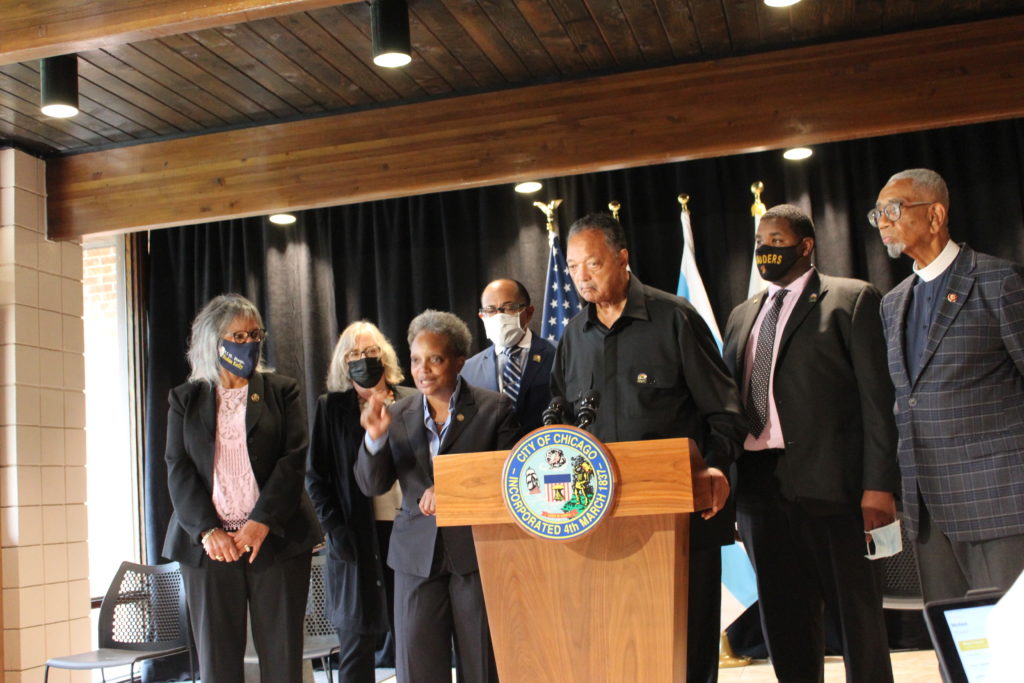 Mayor Lori Lightfoot and State’s Attorney Kim Foxx remain in a stand-off over Foxx’s refusal to press charges against five gangbangers involved in a deadly retaliatory gang fight. Both are standing their ground at a time when gun violence is on the rise and arrests are few.

At a press conference at Concordia Place Apartments, 13037 S. Daniel Drive where Lightfoot joined Reverend Jesse Jackson to tout the progress of a Rainbow PUSH Coalition-led rehabilitation of 297 infested units, the mayor announced she will ask the U.S. Attorney to take a second look at the same set of circumstances.

Lightfoot dug deeper into her opposition of Foxx’s refusal to charge five gangbangers with murder after last Friday’s (October 1) shootout in Austin.

Asked about Foxx’s saying that Lightfoot, who is a former prosecutor, “knows of the ethical obligation of the prosecutor to only bring forth charges where the facts, evidence, and law support it,” the mayor said, “You had a shootout on a weekday into a residence.”

Addressing her doubts to Foxx as if she were present, Lightfoot asked, “Help us understand what happened…why no charges were made? I still ask that question, and I’d like her to actually explain.” Saying she is still getting calls from residents and other elected officials, Lightfoot added, “We have to understand how it is a custom when this kind of shootout is captured on film if there are no charges of any person, even though people were brought into custody and arrested.”

Explaining that she and Foxx have been communicating on this issue, Lightfoot said, “People want to know how it is possible, given what we saw that in Austin…, with officers on the scene but not a single person has been charged.”

Lightfoot pointed out, “We have a responsibility to make sure those who are wreaking havoc on our community are held accountable. It’s a simple matter of justice. They want to be safe, but all parts of the justice system have to be working together. It just can’t be the police. We need partnership with the County and that’s the State’s Attorney, the Courts and obviously the sheriff with the jails.

“Everybody’s got to be working together, but we cannot send a message that it’s OK and you get a pass that you shoot up a residence in broad daylight captured on film and no consequences will happen to you,” Lightfoot said. “That can’t be the world that we live in. We have a greater responsibility to our residents, and we’ve got to send a message loud and clear to the people who pick up arms to kill other people.

“They weren’t shooting for target practice. They were shooting to kill,” Lightfoot told reporters. “There has got to be accountability for them and that accountability has to start with getting a full investigation, getting them charged and holding them accountable in a court. All of that has to happen, and it starts with making sure that people who are guilty of crimes are being charged with those crimes so the process can work.”

Lightfoot said that is important because “it ensures the residents that they don’t have to live in fear. It ensures witnesses, but it also sends a very clear message to people who don’t care about the sanctity of life that you will not be able to walk brazenly on our streets, in our city committing these kinds of crimes,” Lightfoot said.

While not taking an official position on the case, Jackson referred to other recent separate fatal shootings, those of Jamari Williams and Kentrell McNeal, Simeon High School students shot four hours apart.

Jackson announced that he would visit the school. “The community cannot be a sanctuary for killing. The killer walks the streets…they’ll kill some more. We must stop that….Somebody knows who killed those boys.”

Lightfoot was reminded that her own detectives claim the video of the shooting in Austin was not clear.

Lightfoot said, “People simply do not understand how you can have a firefight initiated by people…with cars running around that house. You see individuals get out of their cars, initiated a firefight. We know that one person is deceased, but the other two were captured fairly shortly afterward with guns, guns used in a firefight. We need to understand how it is that no one got charged with anything,” she said.

The mayor is asking Foxx to reevaluate the evidence, move to make charges, and tell her what other evidence she needs. “It’s hard for me to understand that nobody got charged.” Repeating what Jackson said, the mayor added, “We can’t have that in our communities.”

“Everybody has to work together. Obviously, there was a breakdown here somewhere, and we’re just trying to get to the bottom of this so that people who fired brazenly into a house in broad daylight feeling like there would be no accountability demanded of them. We have to send them an entirely different message.” Again Lightfoot said, “Our community cannot be a sanctuary for killers.”

Foxx issued a statement saying that she is “fully aware that as a prosecutor we’re obligated not to try cases in the media. It is unclear why she has chosen to make such statements, especially absent the full information that was presented to our office by the Chicago Police Department.

“The detectives reached out to our office on Friday and acknowledged at the outset that given the chaotic nature of the scene they were unable to determine how the events unfolded. We reviewed the evidence that was presented to us in consultation with the detectives and they agreed we were unable to approve charges based on the evidence presented.”

Foxx said as new evidence is gathered, she stands ready to bring charges when appropriate, but she also pointed out that the mayor’s facts are wrong in this case.

“The facts the mayor presented today simply are not in line with what was presented to us by CPD, and not borne out by the evidence we received. The staggering violence that is devastating our communities is horrific; however, we must still adhere to both our ethical and legal standards in evaluating charges. As a former prosecutor,” Foxx said of the mayor, “she knows that.”