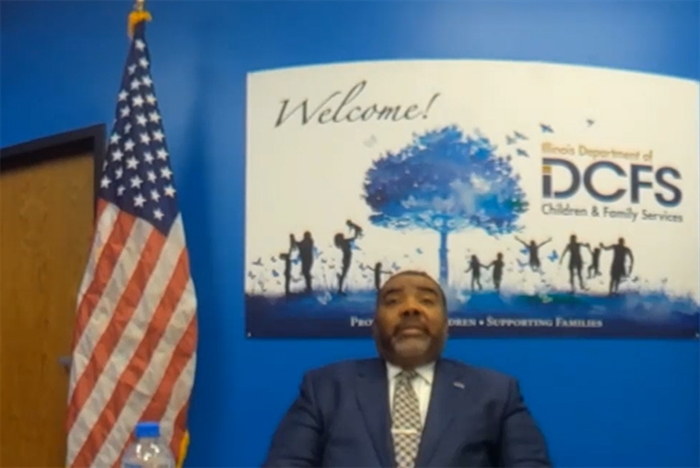 It was a full afternoon of questioning for Illinois Department of Children and Family Services Director Marc Smith, who appeared before the House Human Services Appropriations Committee for a three-and-a-half-hour virtual hearing Friday.

“This hearing comes in the wake of recent reports of the department; the litigation issues, the court findings in recent cases, the deaths of children who have been in contact with DCFS, the deaths of DCFS workers and social workers such as Deidre Silas, who are working diligently with our children in the line of duty,” said Committee Chairperson Rep. Camille Lilly, D-Chicago.

“The goal of this hearing is very simple: to discover the truth, ensure accountability and develop long-term solutions. We’re not here to point fingers. We’re here to learn what we need to do to ensure the safety of our children under the DCFS department as well as his workers,” she said.

The three children at the heart of these cases have been placed, but only one is in permanent placement, according to Cook County Public Guardian Charles Golbert.

The 9-year-old girl who spent seven months in a psychiatric hospital is in a temporary emergency placement. The 13-year-old boy who spent five months in a temporary emergency placement is now in a foster home. The 17-year-old boy who was in a psychiatric hospital is now in an integrated care facility and on a waiting list for a therapeutic treatment center.

“Sometimes it is a tremendous amount of work to find a provider who can care for a very specific specialized kind of child,” Smith said. “So we have to work very closely with them to develop the programming in order to fit the need of an individual child and to be able to care for that child safely. “It goes to those providers to help them to be able to develop the resources to care for these very, very needy children who have so much going on.”

According to written testimony submitted to legislators, Golbert said his office had been raising concerns about inappropriate placement of DCFS wards since 2016. Now, it has reached a crisis, Golbert wrote. These children’s cases are reviewed on a newly-created Cook County docket informally called “the stuck kids call.”

“In this spirit of humane concern, and also apparently in frustration with the growing number of children before each judge whom DCFS warehouses in inappropriate placements, the Juvenile Court in Cook County recently took the unprecedented step of creating a consolidated docket specifically to hear the cases of youth in care abandoned by DCFS in psychiatric hospitals, what are supposed to be ‘temporary’ shelters, and other inappropriate placements,” Golbert wrote.

Under questioning from Rep. Patrick Windhorst, R-Metropolis, about DCFS failing to abide by court orders and moving children into appropriate placements, Smith said DCFS is working with private agencies, which are facing their own hiring struggles and reconstituting services that were systematically dismantled by the lack of a state budget.

“That does not mean on any level that we do not have aggressive, hardworking people working at all hours of the day, every day trying to place that child,” Smith said. “And so for me, it’s so important and I would resigned from this position immediately if I did not feel and act this way that these kids have to be cared for and placed appropriately.”

The number of children who fall into this category of care is a small portion of the 21,000 children DCFS has in its care, Smith said.

Smith also addressed safety concerns for DCFS employees in the wake of the murder of investigator Deidre Silas. Silas was murdered while checking on the welfare of six children in Sangamon County.

Smith told the committee that 90 percent of his offices have an armed guard, but those guards do not go out on calls. DCFS works with local law enforcement to determine if there are safety concerns at the site and can go to calls in pairs. DCFS also instituted training after the murder of DCFS worker Pam Knight three years ago in northwest Illinois, Smith said.

Rep. Tom Demmer, R-Dixon, asked Smith about the death of 7-year-old Nathaniel Burton, who died in February 2021. The agency had been involved with Nathanial’s family since he was 5 months old, Demmer said. DCFS received five reports of abuse, but each allegation was unfounded.

In the second hour of the hearing, Rep. Steve Reick, R-Woodstock held up a thick binder displaying DCFS rules.

“The focus here is on an overwhelming amount of rules and procedures which has resulted in a lack of critical thinking skills and case individualization,” Reick said. “We have a situation here where we have an agency that is a top-down organization where local control is going to be much more available and much more valuable in making child welfare decisions than a state agency that tries to run everything from a central location using centralized rules.”

Smith will face additional hearings next week before a Senate committee.

Lilly also indicated there will be further hearings in the House, though no dates have been set.