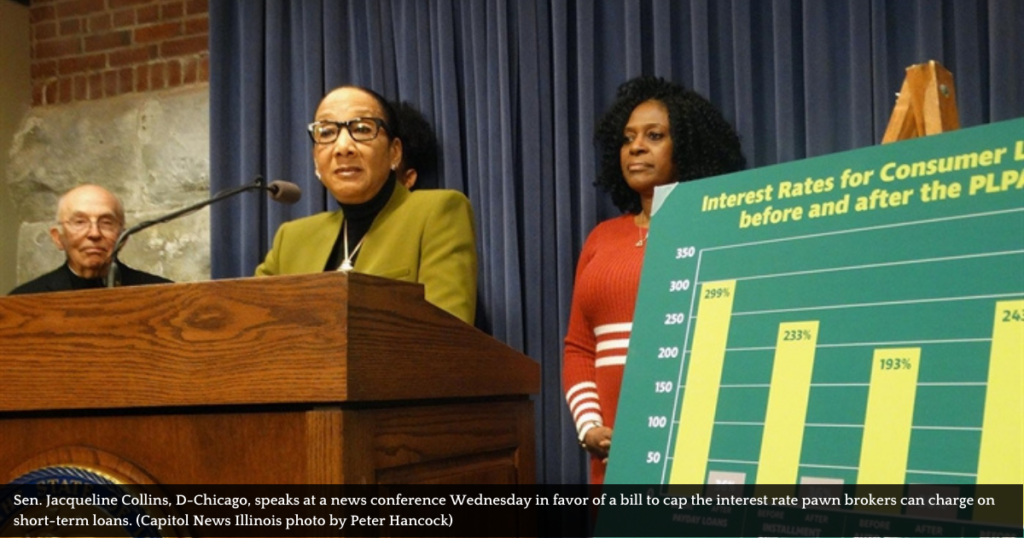 Members of the Illinois Legislative Black Caucus are pushing legislation to put pawnbrokers under the same interest rate caps as payday lenders and other small-dollar, short-term lenders, but the pawn shop industry says the proposed caps would effectively put them out of business.

On the first day of a brief “lame duck” session Wednesday, state Sen. Jacqueline Collins and Rep. Sonya Harper, both Chicago Democrats, joined other advocates in accusing the pawn industry of exploiting a “loophole” in a 2021 law known as the Predatory Lending Prevention Act that was aimed at reining in the high-interest, short-term loan industry.

“The PLPA put a stop to many forms of predatory lending in Illinois, but pawnshops convinced a judge to give them a loophole to allow them to continue issuing loans with abusive and excessive three-figure interest rates,” Collins said during a Statehouse news conference.

The PLPA passed during the General Assembly’s last lame duck session in 2021, as part of the Legislative Black Caucus’ agenda aimed addressing what its members described as “systemic racism.” The law caps consumer lenders to charging no more than 36 percent interest per year.

But the law did not specifically mention pawnbrokers, who are allowed to charge interest rates and fees that can amount to effective rates as high as 240 percent per year or more when factoring in associated fees, according to the Woodstock Institute, a consumer advocacy group.

Two bills that have been introduced in the lame duck session – Senate Bill 4241 and House Bill 5840 – would close that gap by including pawn brokers within the PLPA.

“Predatory loans have drained billions from Black, brown and lower-income communities in our state,” Harper said. “The PLPA has stopped this cycle of disinvestment and enabled our community to retain wealth and to invest in jobs instead of padding the pockets of predatory lenders.”

Speaking separately to reporters, representatives of the pawn industry argued that they need to be treated differently from other kinds of lenders because they operate under a different business model.

“We’re already under a 36 percent rate cap. That’s how much interest we can charge, is 36 percent maximum,” said Kelly Swisher, president of the Illinois Pawnbrokers Association. “What we’re allowed by the Pawnbroker Regulation Act is to charge additional fees to help cover the mandated requirements for the pawn industry.”

When a person comes in to pawn something – a watch, a musical instrument or a stereo, for example – Kelly said the pawn shop is required to store those items on the premises, secure them and insure them for twice the amount of the pawn loan.

“And we have police reporting requirements, which, believe it or not, cost money,” he added. “A pawn shop must report to the local police and municipality by noon the following day of all the transactions that we do.”

Pawn shops also must conduct certain customer checks with the Department of Homeland Security and the U.S. Treasury’s Office of Foreign Assets Control, he said.

Putting pawnbrokers under a strict 36 percent cap would effectively limit them to charging just $3 per month on a $100 pawn, which Swisher said would not be enough to cover those additional mandatory costs.

As of Wednesday, it was unclear whether there would be enough time to consider the bills during the brief lame duck session, which cannot go beyond Jan. 11, when the newly-elected 103rd General Assembly is sworn into office. But Collins said she believes they will have the support of the Democratic legislative leadership.

“We expect for the speaker and for the president of the Senate to honor the position of the Illinois Black Caucus,” she said.

Capitol News Illinois is a nonprofit, nonpartisan news service covering state government. It is distributed to more than 400 newspapers statewide, as well as hundreds of radio and TV stations. It is funded primarily by the Illinois Press Foundation and the Robert R. McCormick Foundation.