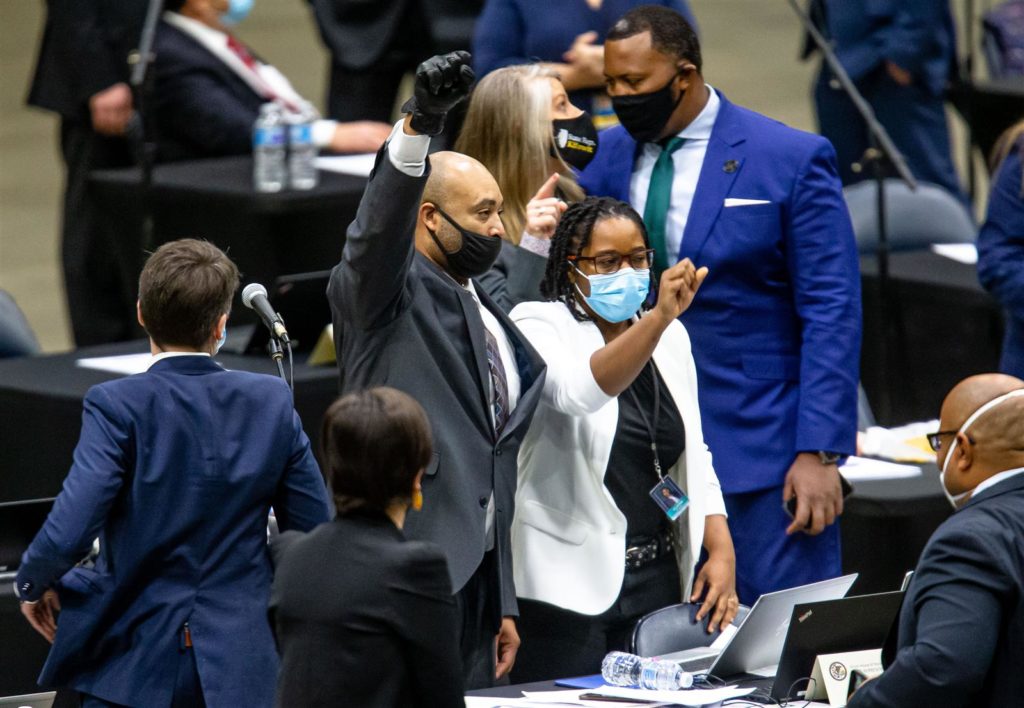 Introduced by Chicago Democratic Sen. Elgie Sims, an amendment to House Bill 3443 would act as trailer legislation for the SAFE-T Act, a major criminal justice reform backed by the Illinois Legislative Black Caucus that was signed into law by Gov. JB Pritzker in February. That measure mandated body cameras and changed use-of-force guidelines for law enforcement, created a new police certification system, expanded detainee rights and ends the use of cash bail in Illinois.

Unlike the SAFE-T Act , Sims’ new legislation has the support of the Illinois Association of Chiefs of Police and the Illinois State Police and amends some controversial portions of the act that were opposed by law enforcement.

In a statement posted to its website, the IACP approved of the amendment’s changes relaxing rules around body cameras, removing some use-of-force restriction language and extending deadlines for new training standards.

It passed the Senate 42-17, but in the House, Rep. Justin Slaughter, D-Chicago, who negotiated most of the major provisions in the SAFE-T Act alongside Sims, ran into opposition from fellow Chicago Democratic Rep. Curtis Tarver.

Tarver called the trailer legislation a “piss-poor bill,” and rejected the idea that it was a Black Caucus amendment because Slaughter did not present it to the entire Black Caucus before he and Sims introduced the legislation.

The legislation ultimately passed 79-36, with multiple Republicans voting in favor of the measure and Tarver voting as the sole dissenting Democrat. A brief parliamentary hold was put on the bill, but as of Wednesday, June 2, 2021 it had been lifted, clearing the way for it to head to the governor.

“The SAFE-T Act [is] a bold momentous transformational initiative that makes Illinois a national leader in criminal justice reform, and a model for other states to follow,” Slaughter said. “I beg of you, respect the hard work of the stakeholders that came together on a product where there are no winners or no losers on a bill, where no one gets everything that they want. As a sponsor of this bill I’m absolutely honored to work with all the stakeholders and proud of our efforts.”

A provision in the SAFE-T Act prevented officers accused of misconduct or involved in a shooting, or who have used force which resulted in bodily harm, from using footage from their body camera or recordings from other officers when writing reports of the incident.

HB 3443 keeps that provision in place, but adds language that allows an officer, with a supervisor’s approval, to file a supplementary report for which they can access body camera footage.

The SAFE-T Act instituted limits on when an officer may use deadly force to two scenarios – when they believe deadly force is needed to prevent death or harm to themselves or another person; or when an individual who “just” committed a violent felony and cannot be caught at a later time is attempting to escape, is likely to cause great harm to another person and only deadly force can stop them.

The amendment removes the word “just”, requiring only that a violent felony was committed in general. The amendment also removes the requirement that a dangerous individual “cannot be apprehended at a later date,” leaving the restrictions that an officer must believe only deadly force is able to stop the suspect and that the suspect is likely to greatly injure another person.

As a counterbalance to the removed language, the amendment adds that the officer’s ability to use deadly force ends when the threat of “bodily harm to the officer or another” ends.

Chokeholds, which are considered deadly force under the SAFE-T Act, are defined as any direct pressure to the throat, windpipe or airway. The amendment carves out an exception for contact with an individual’s neck “that is not intended to reduce the intake of air.” An example listed is a “headlock” which can be wrapped around a suspect’s forehead or chin.

A provision on law enforcement misconduct is also changed to be more lenient under the amendment. In order for an officer to be charged with law enforcement misconduct, a Class 3 felony, the officer must have knowingly and intentionally misrepresented or withheld knowledge of the facts of a case with the intent to obstruct the prosecution or defense of an individual, under the amendment.

The IACP also noted a lack of state funding for the body camera mandate and the fact that the attorney general can issue penalties to individual officers, rather than penalties for their departments and municipalities, for civil infractions, as “major issues unaddressed” in the trailer bill.

“The Illinois Chiefs support the trailer bill. It addresses many of our serious concerns with the SAFE-T Act, and law enforcement will be much better off with these changes,” the statement from the IACP concludes. “We remain concerned about unresolved and unaddressed issues, but in recent months we have strengthened a process of negotiating honestly and in good faith with legislators about criminal justice reform.”

Sims released a statement after his amendment passed the Senate.

“Public safety has always been the number one priority of the SAFE-T Act and our goal remains the same— to create safer communities. That’s why, when negotiating these changes, we again included input from advocates, law enforcement officials and various stakeholders,” he said.