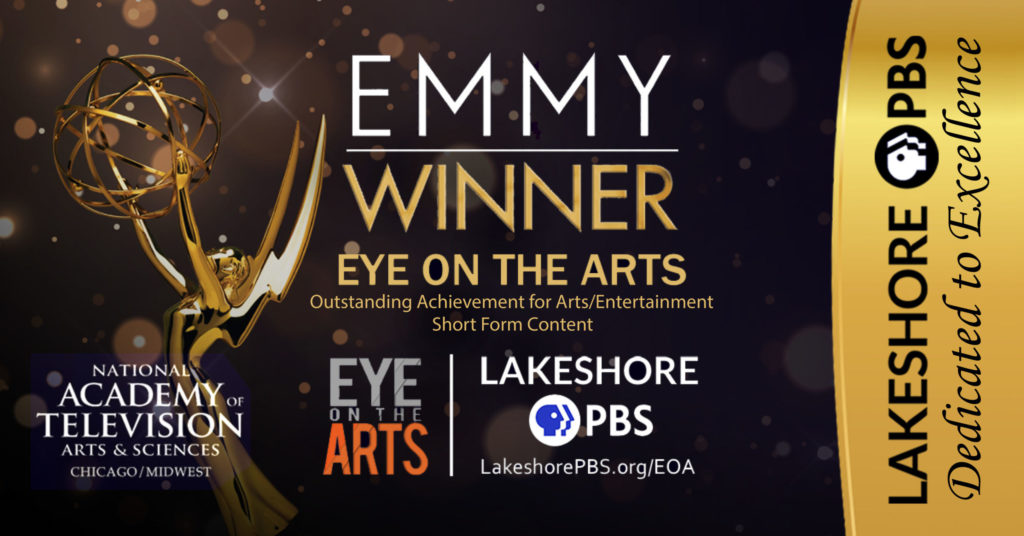 While Lakeshore PBS has received four Emmy nominations in the past few years, this is the station’s first time taking home an award. Lakeshore Public Media’s President and CEO James A. Muhammad could not be prouder of his team.

“As an organization, we have grown in so many ways over the past few years. Now our efforts have gained us and our community recognition from one of the most prestigious awards organizations in broadcasting,” Muhammad said.

“Ultimately, our work is about building, enriching and enhancing the quality of life in the communities we serve,” he continued. “We have a passion for and commitment to these communities that ignites us to do our best to produce our stories in ways that accurately convey the greatness of our people and the richness of our culture. I believe these things can be seen and felt in our work.”

“Eye on the Arts” is a half-hour program that highlights a diverse range of local artists, arts organizations, and events. It is produced by Tony Santucci, Vice President of Production for Lakeshore PBS, with additional segments produced by Justin Hill, Alex Hernandez, and Kevin Lunn. The series received the Emmy award for its individual profile of blacksmith Madison Wise of New Lenox, Ill.

“It’s an honor to be recognized by the Emmy committee,” Santucci said. “I hope our work brings to light the artists that help make our community an evolving and vibrant place to live. Being able to document these artists has made our work better by association, and their passion is contagious. We promise to bring more attention to our creative community.”

Lakeshore PBS was also recently announced as a finalist in two categories for the 53rd Annual Public Media Awards. The categories include Short Form for their work on “Eye on the Arts” and Excellence in Content Compilation for overall local productions. Earlier this year, Lakeshore PBS received national recognition receiving four Telly Awards including its first Gold Telly Award for another local show produced by the station called “Friends & Neighbors.”

“Eye on the Arts” currently airs on Lakeshore PBS Sundays at 9 a.m. and Thursdays at 4 p.m. The series can also be streamed online at Video.LakeshorePBS.org or through the free PBS Video App available to download on popular digital platforms. “Eye on the Arts” is made possible in part by financial support from Legacy Foundation, NIPSCO, Purdue University Northwest, South Shore Arts, The Indiana Arts Commission, and the National Endowment for the Arts.

Lakeshore Public Media has been a public broadcasting entity based in Northwest Indiana for more than 30 years. Lakeshore Public Media operates both Lakeshore PBS and Lakeshore Public Radio. The nonprofit organization’s mission is to enrich the lives of the communities they serve through lifelong learning, the celebration of human diversity, and engagement in civic concerns.  More information is available at LakeshorePublicMedia.org