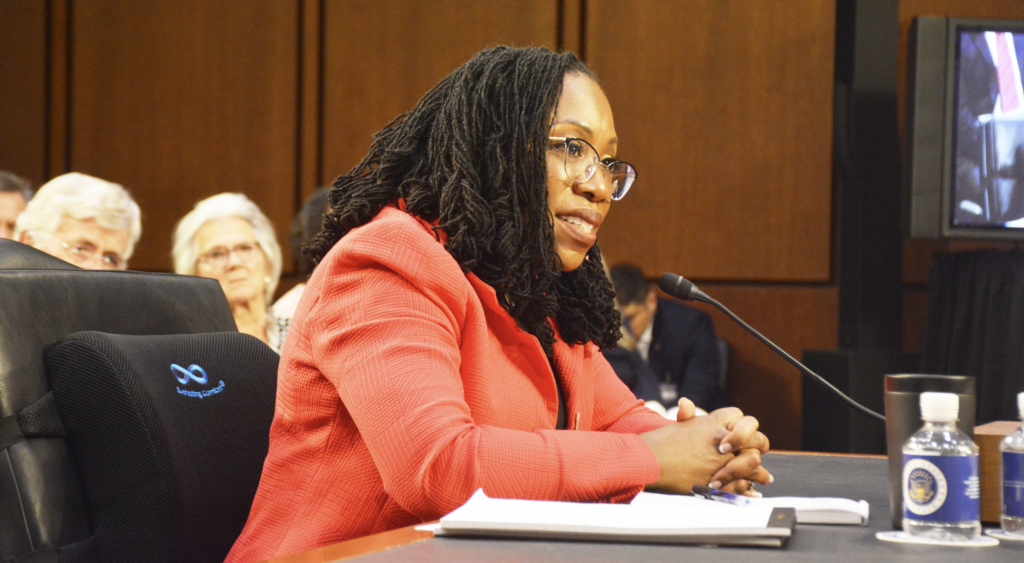 WVON, the Black Information Network and BET were among the news outlets that carried the historic confirmations live as Jackson shone on the national stage with her legal brilliance and unflappable demeanor that withstood intense questioning by Republican senators.

Illinois Lt. Governor Julianna Stratton and State Senator Mattie Hunter were among the Black women who attended the hearings.

For Jackson and her family, it was a proud moment as her parents Johnny and Ellery Brown sat yards away from their daughter, whom they raised in Miami and steered toward a successful legal career that began at Harvard Law School and continued as a federal judge in Washington and as judge of the federal appeals court in the nation’s capital.

In her opening statement, Judge Ketanji Brown Jackson said of the historic nature of her nomination, “I am here standing on the shoulders of generations of Americans who never had anything close to this kind of opportunity.”

Jackson also said, “I was born here with an African name that my parents gave me to demonstrate their pride in who they were and their pride and hope in what I could be. On Monday, March 21, the opening day, of Jackson’s confirmation hearings, NAACP President and CEO Derrick Johnson tweeted, “Today is historic confirmation hearing for FIRST Black woman justice. The NAACP is engaged in 50-state strategy to ensure she receives votes from each and every senator.”

That same day, Marc Morial, president and CEO of the National Urban League tweeted, “Today is historic. There have been 115 justices who have sat on the Supreme Court, and Judge Ketanji Brown Jackson is the first Black woman ever nominated to become one. Let’s get her confirmed swiftly.”

During one moment of the confirmation hearings, Jackson, speaking of her parents, told New Jersey Democrat Senator Cory Booker, “They taught me hard work. They taught me perseverance. They taught me that anything is possible in this great country.”

All week it was live political theater in Washington where Republicans relished the opportunity to avenge the treatment Democrats gave to Amy Coney Barrett and Brett Kavanaugh during their Supreme Court confirmation hearings in 2020 and 2018, respectively.

One of the most intense days of questioning came Tuesday, March 22.

Jackson that day defended her judicial record as Republicans attempted to portray the nominee as weak on crime by focusing on her experience as a federal public defender who represented Guantanamo Bay detainees. They challenged Jackson again as a judge who was criticized for giving weak sentences for convicted criminals in child pornography cases. Jackson’s judicial philosophy was also put to the test.

Under intense questioning, Jackson rose to the occasion with grace and poise.

Jackson said that as a mother and judge, she approaches her work in an impartial way, and personal opinions do not play a role.

“Over the course of my almost decade on the bench, I have developed a methodology that I use in order to ensure that I am ruling impartially and that I am adhering to the limits on my judicial authority,” said Jackson.

“I am acutely aware that as a judge, in our system, I have limited power, and I am trying in every case to stay in my lane.”

When South Carolina Republican Senator Lindsey Graham asked Jackson if she would say that she is an activist judge, Jackson replied, “I would not say that.”

Cruz held up books that he said were used at Georgetown Day School in Washington, D.C., where Jackson is a board member. An aide displayed posters showing enlarged pages from one of them, “Antiracist Baby” by Ibram X. Kendi, behind him.

“Do you agree with this book that is being taught to kids that babies are racist?” Cruz asked.

Arkansas Senator Tom Cotton pressed Jackson on whether rapists and murderers should spend more time in jail. Missouri Senator Josh Hawley criticized her sentencing in some cases regarding child pornography.

Louisiana Senator John Kennedy asked Jackson if she believes efforts to pack the Supreme Court will delegitimize it. Jackson responded, “I feel so strongly about ensuring that judges remain out of political debates.”

In response to a question about the duties of a Supreme Court Justice, from Senator Kennedy, Jackson explained what she means when she says that she seeks to “stay in her lane.”

“What I mean is that in our system of government, under the Constitution, we have a separation of powers and each branch has their own sphere of responsibility.

“To say ‘stay in your lane’ is the shorthand that I’m using for indicating that judges should not be policymakers.

“That those responsibilities are left to the elected branches. And that judges are to interpret the law, not make the law. And I use it to refer to the part of my methodology that is mindful of the constraints on judicial authority.”