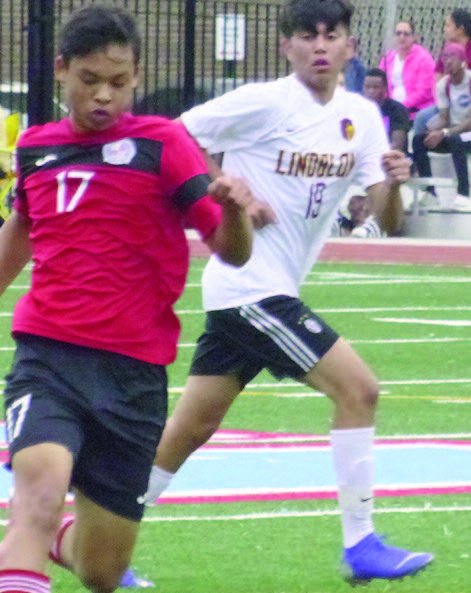 For the first time in school history, the Kenwood Broncos boys soccer team advanced to the city playoffs after a 2-1 victory over Lindblom High School at Kenwood Field on Wednesday night.

“(We made) the City Cup Playoffs,” said Miguel Cedeno, after celebrating the victory and the team’s first City Cup playoff appearance in school history. “The kids are young and are really coming together. It’s really exciting to see. It’s fun to watch them grow and compete.”

Coach Cedeno stated after the game that he was very impressed with his team overall growth. And as he awaits the announcement for his team’s next opponent of the first round, Cedeno see’s potential in this group.

“(This team) is very diverse,” said Cedeno. “It makes it even more fun to coach. To see them come together from different country’s and different cultures.”

With a roster made up of players from Africa, Brazil, Canada, Europe, Paris, Portugal and Sweden, Cedeno was impressed with how the group has bonded together.

“On the South Side there aren’t many school’s competing and advancing to the city playoffs,” Cedeno said.

Cedeno was also impressed with the play of Kenwood’s freshmen Stephon Wilson, who got the Broncos on the board with his second goal of the season, tying the game at 1-1 with 4:35 remaining in the first half.

“Stephon, he is quite the player,” said Cedeno. “And he is only going to get better. This is his first year as a freshmen.”

“I just want to say that this is not a one man game,” said Wilson. “I personally don’t think I’m the best player on the team. I don’t have the most goals. I might have the most assist. But this is a team game.

And this game was very important. And it just showed how good of a team we really are.”

In the second half with the game tied 1-1, Broncos forward Jalen Edwards would score one of the greatest goal’s in Kenwood history, after a perfect assist from France’s native and teammate Ah-Tee, with 21:47 remaining in the game.

Edwards goal at the 21-minute mark was the difference maker down the stretch and the game winner that led to the Broncos first ever city playoff appearance in school history.