Since July 2014, the Katie Hall Educational Foundation, Inc. has traveled to the Lincoln Tomb State Historic Site in Springfield, Illinois to remember the 16th President of the United States of America for his role in authoring the Emancipation Proclamation, the Gettysburg Address, and as Commander-In-Chief of the Army of the Potomac during the American Civil War. President Lincoln also played a key role in ending legalized slavery in America. 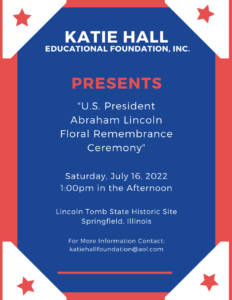 On the evening of April 14, 1865, President Lincoln was shot while attending a play at Ford’s Theater in Washington, D.C., entitled “Our American Cousin.”

A Confederate sympathizer who believed that slavery as it existed at the time in the South (Confederate states) should continue, and expand into the Western territories, was identified as the shooter. President Lincoln died on the morning of April 15, 1865.

Admission to the Lincoln Tomb, the Old State Capitol and the Lincoln National Historic Presidential Site is free.

The leaders and guests of the Katie Hall Educational Foundation, Inc. will recite some of President Lincoln’s most famous speeches before the dedication of the memorial floral piece in his memory.

Afterwards there will be a brief discussion on the economic, political, and social ramifications of legalized American slavery in the year 2022, and beyond.

This event is approved by the Katie Hall Educational Foundation, Inc. and the Illinois Department of Natural Resources.