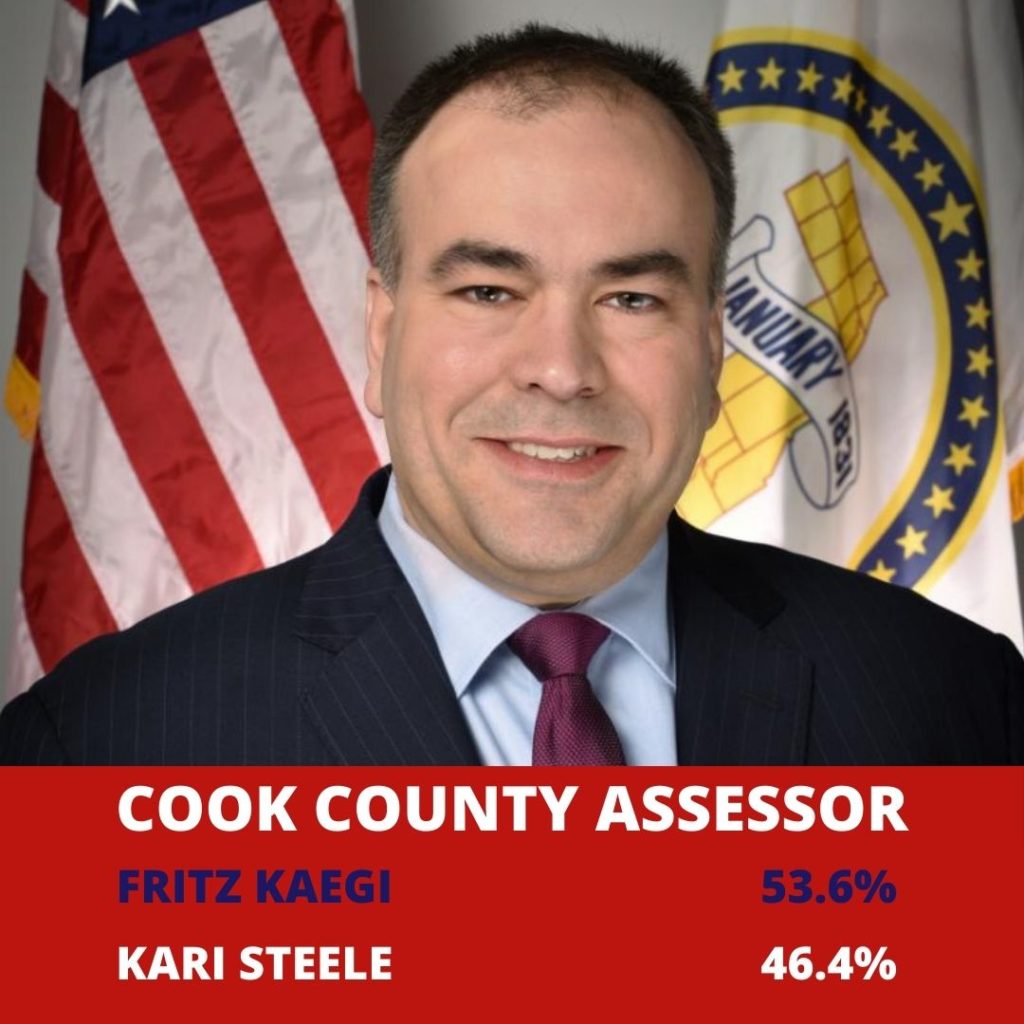 In a close race that was decided in the final moments on election night, Steele lost to embattled incumbent Fritz Kaegi, who ran a campaign aimed at boosting his image as a reformer. He escaped by taking 53.6 percent of the vote to Steele’s 46.4 percent.

“The voters of Cook County have spoken,” Kaegi wrote in a statement. “Reform was on the ballot, and voters have made it clear they want to continue moving forward in repairing our property tax system.”

Kaegi will face Libertarian candidate Nico Tsatsoulis in the Nov. 8 general election. No Republican filed to run in the race.

Steele released a statement to the Crusader Wednesday morning, June 29, saying, “Unfortunately, we came up short tonight. I respect the decision of the Democratic primary voters who voted to nominate Fritz Kaegi as their Cook County Assessor in November. Finally, I congratulate Assessor Kaegi in his victory.”

The race was close the entire evening, but Steele never overcame her opponent as the election returns came in. When the evening was done, Kaegi won the Democratic nomination in his quest for a second term as Cook County Assessor.

No demographic voter data was immediately released after Kaegi’s victory, but Steele was expected to win Chicago’s Black vote, but low voter turnout may have damaged her chance of unseating her opponent.

Steele, the president of the Metropolitan Water Reclamation District of Greater Chicago, entered the race in 2021.The daughter of John O. Steele, a former judge and alderman of the 6th Ward, Steele had endorsements and donations from powerful union groups, including Operating Engineers Local 150 and the Chicago Federation of Labor. Outgoing Secretary of State Jesse White endorsed her.

Elected to the MWRD in 2012, Steele oversees a billion-dollar budget, maintained an AAA bond rating, and has reduced the agency’s reliance on property taxes.

Prior to being chosen by Cook County voters, Commissioner Steele has more than 11 years of experience as a chemist, working at both the Jardine Water Purification Plant (as a water chemist) and the MWRD (as a water sampler and lab technician). Her prior work history makes her uniquely qualified as the only chemist serving on the (current) nine member MWRD Board of the Commissioners.

In launching her campaign, Steele said “I’m proud of the campaign team we’ve assembled. I’m running to make sure working families and small businesses pay only their fair share of property taxes and that bills are accurate and go out on time so that taxpayers aren’t on the hook for the government’s mistakes. Above all, this campaign is about equity–it’s time we finally do right by the residents of Cook County.”

Last March, Steele submitted her candidacy petitions that were four times the amount of signatures required and nearly as many signatures turned in by the entire Cook County slate combined.

During the campaign, she joined critics in accusing Kaegi of mismanagement as union leaders blasted Kaegi’s revamped property assessments that have led to high tax bills and inaccurate adjustments to account for COVID-19’s impact and delayed the upcoming mailing of tax bills by several months.

In 2018, Kaegi unseated predecessor Joe Berrios, one of the most powerful politicians in Cook County by vowing to overhaul the county’s unjust and error-ridden property tax assessment system to make it more equitable, transparent and free from political influence.