Jonathan Jackson and father, Rev. Jackson early vote—call on all to bring family to polls 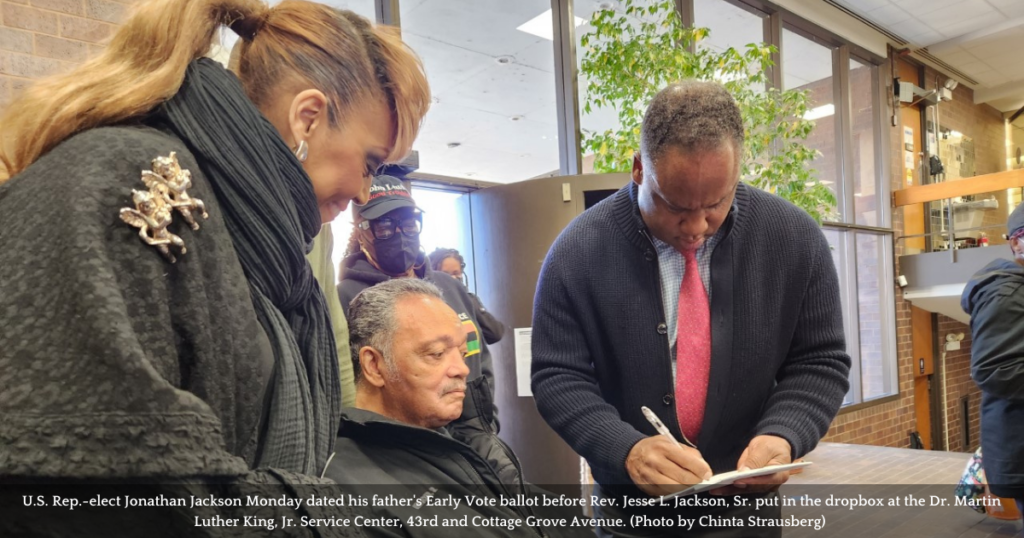 It was a historic and classic scene on the eve of one of the most important midterm elections in decades when Rev. Jesse L. Jackson, Sr. and his son, U.S. Rep.-elect Jonathan Jackson voted together Monday at the Dr. Martin Luther King, Jr. Service Center, 43rd and Cottage Grove.

Looking down at his father, Jonathan Jackson called him his “champion,” then turned to his sister, Santita Jackson, labeling her his “true inspiration.”

During last Saturday’s, November 5th, Rainbow PUSH Coalition town hall, Jonathan Jackson called on voters to come to the polls and to bring their families. Voting, he said, should be a family affair.

Interviewed outside of the Dr. Martin Luther King Service Center, 43rd and Cottage Grove on Monday, Jonathan Jackson said, “I am so excited. I started on February 7th. It was a short race, but it was a culmination of a lifetime of experiences. I have had to look back on public life” he said represented 40 years. Jonathan said he followed in his father’s footsteps during that timeframe. He is committed to public service.

To his constituents, Jonathan Jackson said, “I feel your pain. Inflation is real. We have big things to do in Washington. Our constituents need Medicare, seniors are running out of medication some taking half doses, people are running out of food. Food assistance needs to be increased. We got to get this violence rectified.”

Also agreeing on the need for all voters to come out Tuesday and vote is Bishop Tavis Grant, national acting executive director for the Rainbow PUSH Coalition who said. “The value of this election is the crown jewel of the civil rights movement which was the right to vote.

“We have a moral obligation and a civic duty to do something great on Nov. 8th and that is to vote,” said Bishop Grant.

“There is no compromise, no negotiation, no equivocation as it relates to why we must protect it, preserve it and use it as a means for securing our place in this democracy. This is our country, too” he stated.

When told some black Democrats are threatening to “go fishing” on election day claiming their party hasn’t done anything for them, Bishop Grant said, “Getting even is not what politics is about. Politics is not about even. It is about expansion, and you can’t stop at half-time and expect to win a game if you don’t play the entire game.

“This is not about even. It’s about expansion and there is no greater time now for us to not only expand but to advance in ways that the other side thought we wouldn’t do,” Bishop Grant stated.

“I’d rather to have 50 percent of something than zero of nothing. We have an opportunity to go the rest of the way and get everything that we want that we have yet to receive when it comes to healthcare, employment, criminal justice reform and the economy. You can stay home but maybe by this time in March or April, you may not have a home,” said Bishop Grant.

On election night, the Rainbow PUSH Coalition will be opened from 6 a.m. to 7 p.m. and will be staffed with volunteers and attorneys to handle any election dispute.

Afterwards, Bishop Grant said there will be a watch party at the Chicago Cultural Center. 7059 S South Shore Drove where U.S. Rep. Jonathan Jackson and supporters will be watching the returns. “We are going to have a watch party, a real party to celebrate a number of victories but we have to put in the work before we party,” Bishop Grant said.

Last Saturday, November 5th, Jacqui Algee, vice president, of SEIU Healthcare IL/IN/MO/KS, during a town hall told voters to “take your souls to the polls.” Algee called on all voters to vote for the Workers’ Rights Amendment which if passed would give workers the right to organize and to bargain collectively through representatives of their own choosing for the purpose of negotiating wages, hours and working conditions and to protect their economic welfare and safety in the workplace.