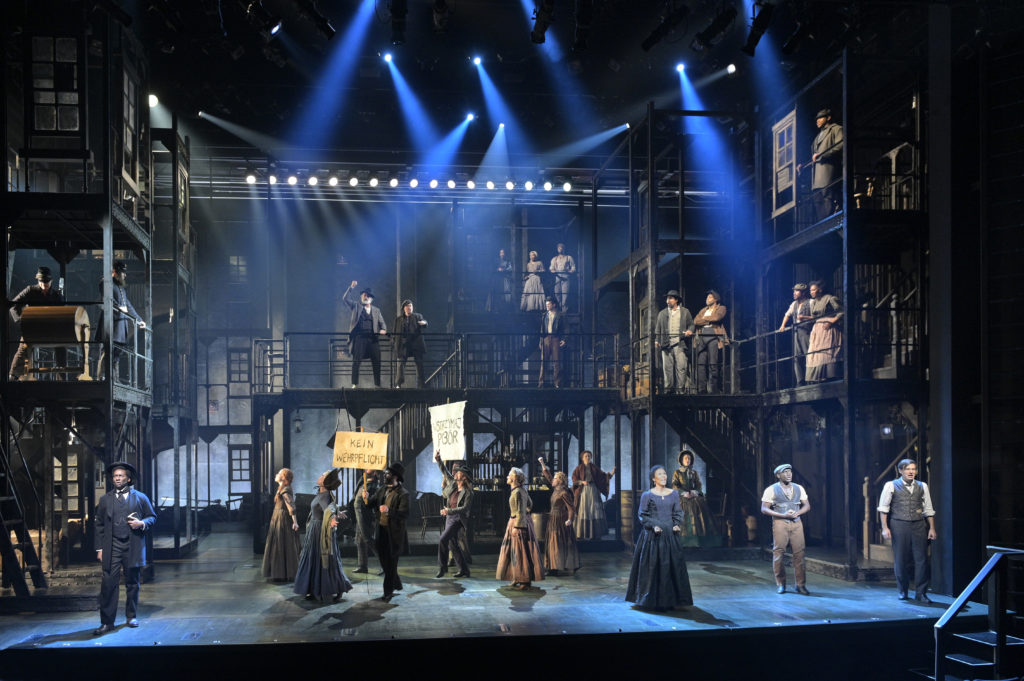 About The Musical:New York City. 1863. The Civil Warragedon. An extraordinary thing occurred amid the dangerous streets and crumbling tenement houses of the Five Points, the notorious 19th century Lower Manhattan slum. For many years, Irish immigrants escaping the devastation of the Great Famine settled alongside free-born Black Americans and those who escaped slavery, arriving by means of the Underground Railroad.

The Irish, relegated at that time to the lowest rung of America’s social status, received a sympathetic welcome from their Black neighbors (who enjoyed only slightly better treatment in the burgeoning industrial-era city). The two communities co-existed, intermarried, raised families, and shared their cultures in this unlikeliest of neighborhoods. The amalgamation between the communities took its most exuberant form with raucous dance contests on the floors of the neighborhood bars and dance halls.

It is here in Five Points where tap dancing was born, as Irish step dancing joyously competed with Black American Juba. But this racial equilibrium would come to a sharp and brutal end when President Lincoln’s need to institute the first Federal Draft to support the Union Army would incite the deadly NY Draft Riots of July 1863.

Within this galvanizing story of racial harmony undone by a country at war with itself, we meet the denizens of a local saloon called Paradise Square: Nelly Freeman (Joaquina Kalukango), the indomitable Black woman who owns it; Annie O’Brien (Chilina Kennedy), her Irish-Catholic sister-in-law and her Black minister husband, Rev. Samuel Jacob Lewis (Nathaniel Stampley). They have conflicting notions of what it means to be an American while living through one of the most tumultuous eras in our country’s history.

Ms. Kalukango is a 2020 Tony Award nominee for Best Performance by a Leading Actress in a Play for her role as Kaneisha in “Slave Play.” She has also starred on Broadway in “The Color 2 Purple,” “Holler If Ya Hear Me” and “Godspell,” among other film and television credits.

The musical features original songs as well as material inspired by the songs of Stephen Foster. Musical direction, arrangements and orchestrations are by Jason Howland. “Paradise Square” is produced by Garth H. Drabinsky, whose longtime colleague, documentary filmmaker Peter LeDonne, is co-producing.

It is choreographed by the iconic Bill T. Jones, artistic director/co-founder of Bill T. Jones/Arnie Zane Company and founding artistic director of New York Live Arts. Jones is the recipient of the 2014 Doris Duke Award; the 2013 Presidential Medal of the Arts; the 2010 Kennedy Center Honors; Tony Awards for Best Choreography for “FELA!” and “Spring Awakening; ”among others.

The world premiere of “Paradise Square” was produced in January 2019 by Berkeley Repertory Theatre. The musical was originally conceived by Larry Kirwan. With visceral and nuanced staging and choreography that captures the pulsating energy when Black and Irish cultures meet, “Paradise Square” depicts an overlooked true-life moment when hope and possibility shone bright.

Ticket Information: Individual tickets for “Paradise Square” are on sale now. Tickets are available for groups of 10 or more by calling Broadway In Chicago Group Sales at (312) 977-1710 or emailing [email protected] For more information about tickets or subscriptions, visit  www.BroadwayInChicago.com.

Broadway In Chicago was created in July 2000 and over the past 21 years has grown to be one of the largest commercial touring homes in the country, entertaining more than 1.7 million people annually in five theatres, which include the Cadillac Palace Theatre, CIBC Theatre, James M. Nederlander Theatre, and just off the Magnificent Mile, the Broadway Playhouse at Water Tower Place and presenting Broadway shows at the Auditorium Theatre.