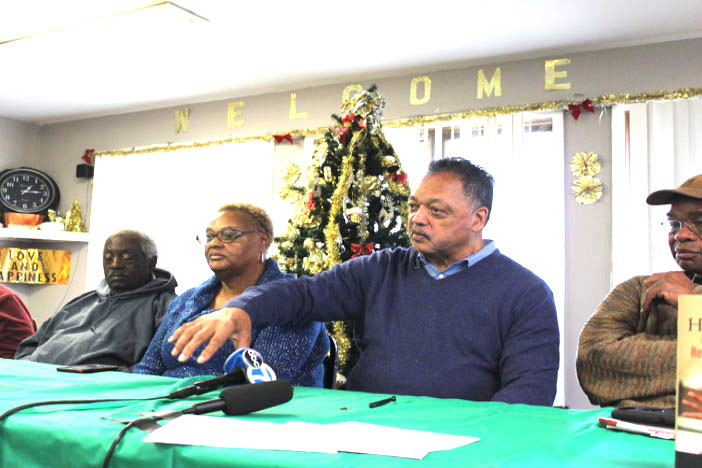 After months of meetings involving Reverend Jesse Jackson, Rainbow PUSH Coalition, community leaders and Illinois elected officials, the Illinois Senate has passed HB3404 establishing Pembroke Township as a designated hardship area. The move is part of an effort to install a natural gas line in Pembroke and Hopkins Park.

The bill’s passage is a victory for Pembroke residents and Jackson, who reached out to stakeholders including Nicor Gas officials who expressed a desire to have natural gas as an energy option.

The bill also allows the area to have natural gas without the local government having to come up with the typical contribution that accompanies such projects.

“This is a big deal and a new day for Pembroke, a Black farming community that has been left behind in the modern economy,” said Jackson. “This project will help bring business to Pembroke, and it will help others do business with Pembroke. I thank Speaker Emanuel Chris Welch for his leadership on this issue.”

Yeary said, “At a time when everyone is focused on the next economy, Pembroke has been left behind in the current economy. This bipartisan effort is a strong statement that Pembroke will be neglected no more. Thanks to Speaker Welch and Senate President Don Harmon, the bill sponsors, members of the Legislative Black Caucus and the General Assembly for listening to the people of Pembroke. We look forward to Governor Pritzker signing the bill into law.”

Located 68 miles directly south of Chicago in Kankakee County, Pembroke is one of the poorest communities in the country.

According to the U.S. Census, nearly 97 percent of Pembroke’s 2,208 residents are Black, and about 33.9 percent live in poverty.

Pembroke is a township that does not have a mayor but is governed by an elected Town Board of a Supervisor and four Trustees. It includes Hopkins Park, headed by Mayor Mark Hodges.

For decades, rows and rows of clapboard homes have used large propane tanks or wood-burning stoves to cook their food because there is no gas line in Pembroke, which includes Hopkins Park.

During a visit to Pembroke last year, a tour guide showed a Crusader reporter three homes with a gas line where white residents lived, but across the railroad tracks were homes where Black residents had large propane tanks in the back yard.

There are many poor Black farmers in Pembroke whose land is not well suited for growing crops.

In 2004, about 200 workers lost their jobs when Nestle closed a plant after the property owner demanded higher monthly rent fees.

The nearest supermarket is 15 miles away, and the closest Walmart is 20 miles from Pembroke.

Jackson has held numerous meetings with Pembroke officials about getting a Nicor gas line in the community. He often described Pembroke as his organization’s “Selma,” a name that references the once segregated city in Alabama, where the late Dr. Martin Luther King, Jr., marched to call attention to the city’s poor and the town’s economic inequities.

When completed, Jackson wants Pembroke to have the same amenities as the majority white towns that surround it.

In 2019, Nicor, pledged $5 million toward the $8 million needed to bring the project to Pembroke.