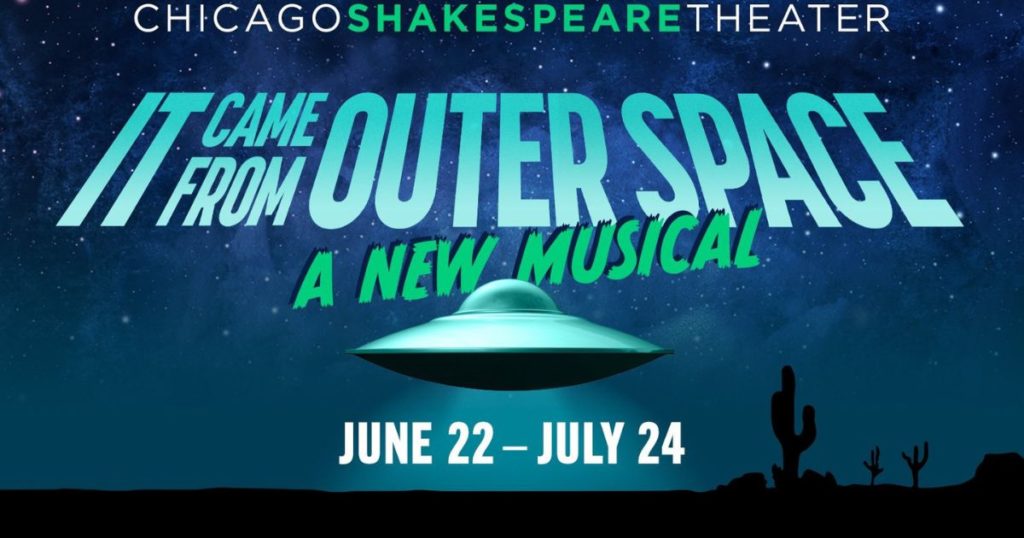 Chicago Shakespeare Theater announces that Jaye Ladymore has joined the company for the world premiere production of “It Came From Outer Space,” a new musical comedy based on the ‘50s cult classic sci-fi film from Universal Pictures. Commissioned and developed by Chicago Shakespeare with Creative Producer Rick Boynton, the production reignites an artistic partnership with creators Joe Kinosian and Kellen Blair following the triumph of their Jeff Award-winning musical, “Murder for Two” (2011), which went on to an acclaimed off-Broadway run. Directed by Laura Braza, the production will make for an out-of-this-world experience in the theater Upstairs at Chicago Shakespeare, June 22–July 24, 2022.

Released in 1953, “It Came From Outer Space” was Universal’s first-ever 3-D movie—and is now celebrated as a hallmark of the golden age of science fiction cinema. Amateur astronomer John Putnam encounters an alien spaceship in the desert and becomes the laughingstock of his small town—until the extraterrestrial visitors make their presence known and he must convince the gathering mob that they have come in peace. Featuring a clever musical score and creative physical humor with six actors playing humans, aliens, and everything in between, “It Came From Outer Space” puts a new spin on the classic flying saucer tale by Ray Bradbury, examining society’s fear of outsiders as it simultaneously embraces the wonder of what lies just beyond the stars.

Jaye Ladymore is taking on the role of the town’s schoolteacher, Ellen Fields. In addition to performances at Chicago Shakespeare in “Macbeth” and “Love’s Labor’s Lost,” Ladymore’s recent credits include the TimeLine Theatre world premiere of “Relentless” and “Too Heavy For Your Pocket” (2019 Black Theater Alliance Award for Best Featured Actress), and “Stick Fly” and “The Importance of Being Earnest” at Writers Theatre. She can be seen on the CW series “4400” as Claudette.

Chicago Shakespeare makes its facility and performances accessible to all patrons through its Access Shakespeare programs.

More information on the production at chicagoshakes.com/outerspace or on social media at #cstOuterSpace.

“It Came From Outer Space” will be presented June 22–July 24, 2022, in the theater Upstairs at Chicago Shakespeare. Tickets ($50–$60) are on sale now. Special discounts are available for groups of 10 or more. For more information or to purchase tickets, contact the Box Office at 312.595.5600 or visit the Theater’s website at chicagoshakes.com. Chicago Shakespeare’s most up-to-date health protocols can be found at chicagoshakes.com/health.