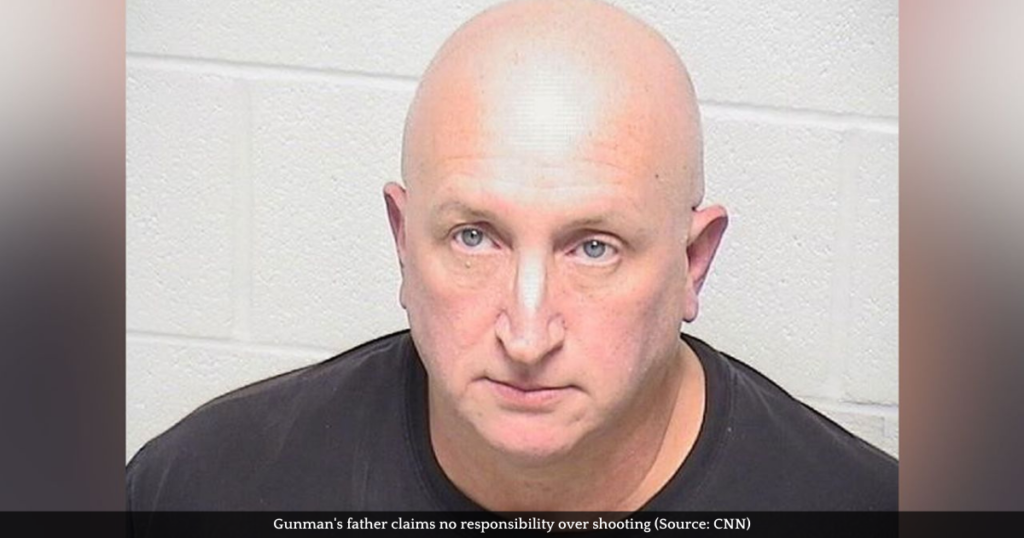 The father of the man accused of killing seven people and wounding dozens more at the Highland Park, Illinois, Fourth of July parade was taken into custody Friday and facing felony reckless conduct charges, prosecutors announced.

Prosecutors allege Crimo Jr. was “criminally reckless” when he signed his son’s application for an Illinois Firearm Owners Identification card nearly three years before the massacre. The card is required to purchase a gun in Illinois.

Helping his son get the card was a “contributing cause to the bodily harm suffered by the homicide victims in the mass shooting,” prosecutors said in a news release.

The accused gunman, Robert “Bobby” E. Crimo III, killed seven people and injured dozens more – ranging from 8 to 85 years old – during what was supposed to have been a carefree, family-friendly patriotic celebration last summer.

Rinehart said Friday the alleged shooter would not have been able to obtain the card without a parent’s assistance because he was under21.

The elder Crimo, who has previously denied any responsibility over the mass shooting, agreed to sponsor his son’s gun license in 2019, months after local police received a report the son had said “he was going to kill everyone” in his family, police said back in July.

Officers also had checked on the younger Crimo earlier that year after he had “attempted to commit suicide by machete,” according to a police report. An attorney for the parents said in July the disputed details of the incidents in the police reports.

“Parents and guardians are in the best position to decide whether their teenager should have a weapon. They are the first line of defense. In this case, that system failed when Robert Crimo Jr. sponsored his son,” Rinehart said Friday. “He knew what he knew, and he signed the form anyway.”

“This decision should alarm every single parent in the United States of America who according to the Lake County State’s Attorney knows exactly what is going on with their 19-year-old adult children and can be held criminally liable for actions taken nearly three years later,” Gomez said in a statement. “These charges are absurd and we will fight them every step of the way.”

The attorney added while Crimo Jr. sympathizes for the victims of the mass shooting, the charges are “politically motivated and a distraction from the real change that needs to happen in this country.”

Gomez said he expects his client to post bail Saturday, since the family has that amount “readily available.”

Bond conditions require Crimo Jr. to surrender his Firearm Owners Identification card along with all of his weapons, observe a curfew, and not use drugs or alcohol, Gomez told CNN.

Crimo Jr.’s next hearing has been set for January 12, his attorney said.

Parents facing charges in another case

While parents of accused shooters historically haven’t been charged in mass shootings, this is at least the second recent case in which parents face charges over violence perpetrated by their child.

The parents of Michigan school shooter Ethan Crumbley, James and Jennifer Crumbley, are expected to stand trial after pleading not guilty to four counts of involuntary manslaughter connected to the shooting. They have argued the charges have no legal justification and they should not be held responsible for their son’s killings.

Ethan Crumbley pleaded guilty in October to terrorism and murder charges stemming from the November 2021 mass shooting at Oxford High School that left four students dead and several others wounded.

In recent court filings, prosecutors in the case disclosed evidence they say shows Crumbley’s mother knew about his unhealthy mental state when the parents bought him a gun days before the shooting.

Eric A. Johnson, a professor at the University of Illinois College of Law, previously explained to CNN a reckless homicide charge is applicable to any act which causes a death, so long as the person was reckless in performing the act, meaning they knew of a substantial and unjustifiable risk the act would cause someone’s death.

In the days after the July 4 attack in Illinois, Lake County prosecutors said they were reviewing evidence “in terms of who knew what when” and had not ruled out charges against the father.

Rinehart, the county state’s attorney, reiterated after the mass shooting investigators worked to piece together what family members and others may have known before the attack and said while there was no criminal liability for sponsoring a firearm owner’s ID, there were “different ways to look at potential criminal liability” in this case.

Local and federal investigators combed through “enormous amounts of digital evidence” since the night of the attack, the state’s attorney said.

“Dozens of federal, state, and local law enforcement personnel have been working to analyze the digital evidence in this case,” Rinehart said. “Our Cyber Lab personnel were critical partners on the team that helped us uncover the truth of the critical weeks before the FOID was issued.”