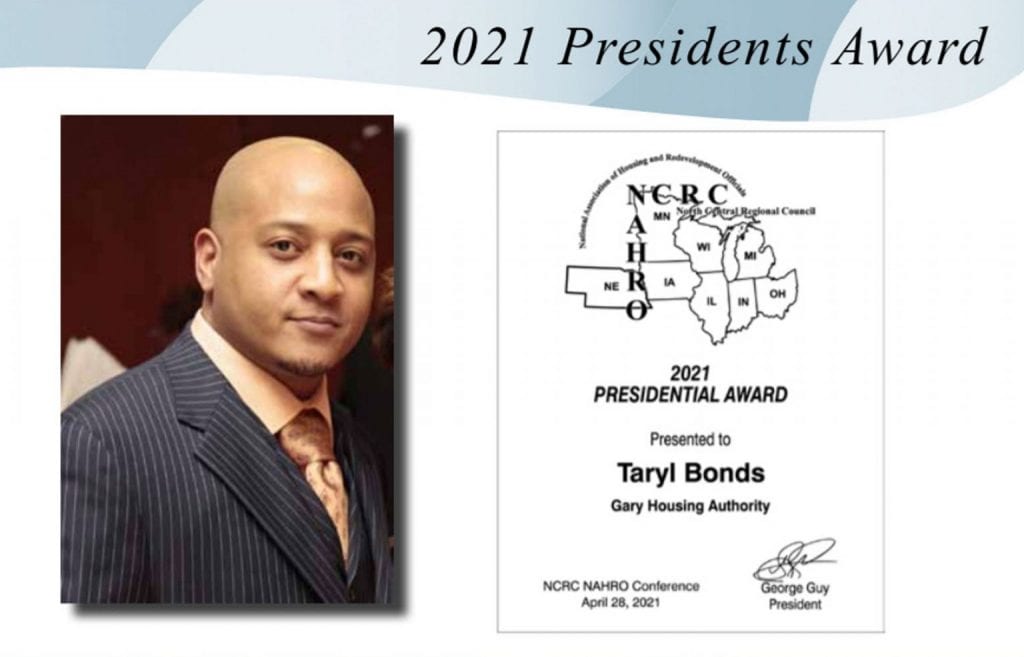 Recently, Gary Housing Authority Executive Director Taryl Bonds was presented The President’s Award by The North Central Regional Council (NCRC) of the National Association of Housing and Redevelopment Officials (NAHRO). This honor is bestowed upon a member of NCRC who shows great leadership and support of the organization.

According to NCRC NAHRO representatives, Bonds was selected for “his leadership and dedication to the Gary Housing Authority.”

In addition, Bonds served as a critical team member as GHA transitioned out of receivership from HUD while helping to erase the title of “Troubled Agency” from GHA’s narrative.

“I am deeply humbled by this designation but no true leader works alone,” said Bonds. “I share this honor with my predecessor, our board members and the dedicated team at GHA who continue to display their commitment and loyalty everyday.”

Bonds began his career in housing in 2002 as Director of Capital Improvements, Procurement and Maintenance for the East Chicago Housing Authority. He served as a Program Analyst for the U.S. Department of Labor’s Federal Contract Compliance Program, and Procurement/Compliance Officer for the Housing Authority of Cook County in Illinois.

A graduate of West Side High School in Gary, he earned a Bachelor of Arts in Communications/General Studies from Ball State University and a Master’s of Public Affairs from Indiana University Northwest. Bonds holds various certifications in housing from Rutgers University/PHADA and the National Development Council. He was recently accepted into Georgetown University’s Master of Real Estate program where he will study Real Estate Development.

Bonds is the father of four children and resides in Gary with his wife Romeka. For more information about the Gary Housing Authority, visit www.garyhousing.org.