My staycation at the 21C Museum Hotel Chicago 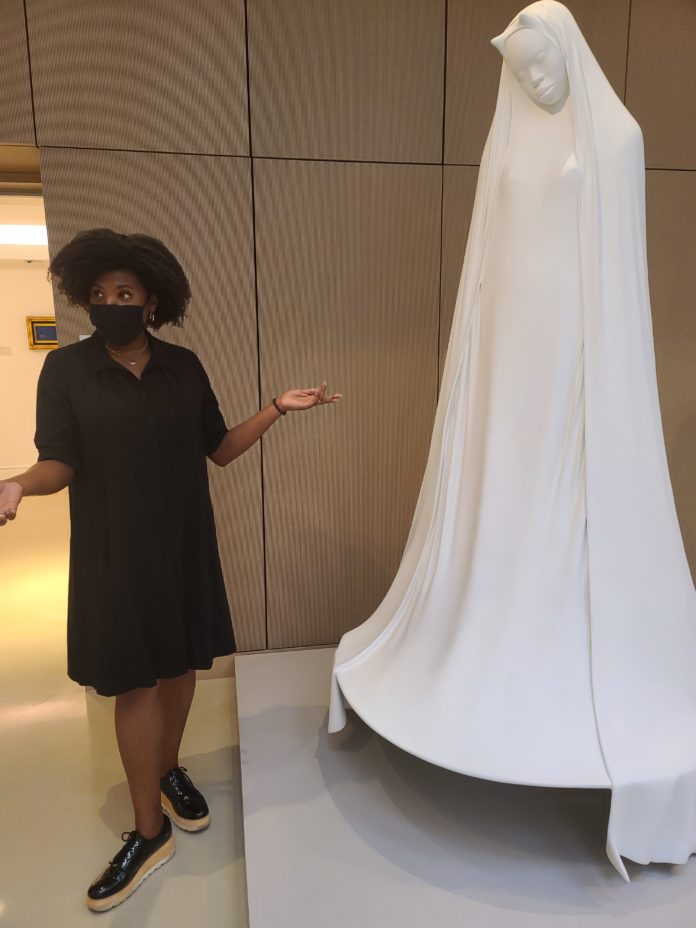 My love for travel has been going through withdrawals during the pandemic time.  One way I satisfy the craving is to find a nice boutique hotel in the Chicago area, book a weekend, and pretend I am a tourist in my own city. I love boutique hotels because they are small but usually have an interesting décor and history.

Recently I heard about a new (at least it was to me) hotel called the 21C Museum Hotel Chicago right in the middle of the Gold Coast.  The Chicago hotel opened in February of 2020 just in time for the pandemic. The premise of the hotel intrigued me because it is a museum that is open to the public 365 days a year, 24 hours a day.  I had to see how this worked within a hotel setting.

Adia Sykes, the Museum Manager at 21c Museum Hotel Chicago explained to me, the 21C Museum Hotels was founded in 2016 by Steve Wilson and Laura Lee Brown, who had just amassed an absolutely phenomenal contemporary art collection and decided upon the model of a hybrid art museum with a hotel attached to it. She went on to tell me, “We like to say that we’re a full-fledged museum that happens to have some sleeping rooms attached to it. We are very much foreground the fact that we have art, but not just art, an entire museum. Every 21c that opens, this is the ninth property, there’s a brand new exhibition.

All of our exhibitions are curated by our head curator and museum director, Alice Gray Stites.”  I will talk about the museum part later.

There are many ways that I rate a hotel experience. One is my first impression walking into the lobby area. Entering the lobby is an experience because the art installations take over but not in a bad or cluttered way.  I was mesmerized by several of the art pieces.  The check-in staff was pleasant and very helpful.  I almost fell over when they informed me that overnight parking was $25.  Do you realize that most downtown hotel overnight parking is between $50 and $75 per night? Great way to start my staycation.

My room was nice, modern, and comfortable.  I had a corner room, so the bedroom walls were windows facing Rush and Ontario.  The bathroom and amenities were to die for and the shower, was amazing and spa like.  Yes, I was impressed by the bathroom.

The main reason I chose this hotel was the Museum.  I asked Adia Sykes, the Museum Manager, if she would give me a tour and she kindly did.

My favorite piece is the first thing I saw when I walked into the Lobby.  It’s a young man riding a bison, holding a baby with the American flag over his shoulder and what looks like tattoos of words all over his body.  I stood and looked at it for a long time and it really spoke to me. I Asked Adia to explain it to me,

“The artist is named The Kid. He’s a Dutch Brazilian artist living between France and Amsterdam, so already a kind of amalgam of identities within one individual right there. But he is very much interested, preoccupied with, I would say borderline obsessed, with American history, myth, and folklore. Particularly ideas of the American dream as they pertain to youth.

So, you have the bison, now domesticated, being ridden, the last free roaming beast of the Great Plains. On top of the bison, is this young individual. If you stare into those eyes long enough, you’ll feel that same forlorn despondent feeling.

He is carrying with him some things that might be repurposed, that might serve him in a different way in this mythical future. We have a couple of references to sports teams, the Buffalo Bills, Chicago Bulls, and the flag dragging behind him. The flag is also being used to swaddle the baby in his arms. Someone on a tour brought up a really astute observation of maybe that’s the next generation.”

On the wall in the lobby is a piece by Titus Kaphar, a Black American artist, entitled ASCENSION. Adia explained that the piece is, “the iconic photo, Michael Jordan the jump man when he was playing here in Chicago. Laid within that, a 15th century painting, or representation of a painting, of Christ being taken down from the cross. The artist juxtaposing the martyrdom of Christ dying for the sins of humanity to the sacrifice that professional sports players make. Sacrifice of their body, time, privacy, agency in many ways. And then you see the spectators in the background looking on in awe.”  Personally, when I looked at it, I was reminded how the masses cheered Jesus and then turned on him, in the same way that they cheered Michael and other athletes but when things happened in his life, they turned on him.

I could go on and on of how my staycation at the 21C Museum Hotel Chicago was not only relaxing but an experience.  The Museum is on two floors and every piece will spark a conversation.

The Museum is open to the public 24/7, 365 days a year, admission is free.  If you are staying in the hotel, no worries, no one without a key can go above the second floor.  There are public special events and virtual and in person tours you can sign up for.  Visit www.21cmuseumhotels.com/chicago/ for more information.