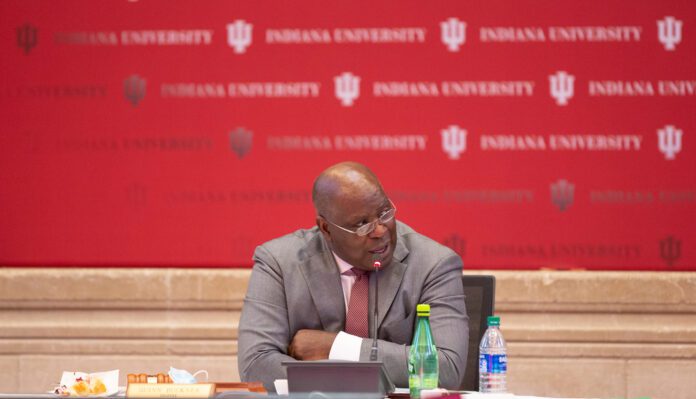 The Indiana University Board of Trustees has elected W. Quinn Buckner as the new chair of the trustees and MaryEllen Kiley Bishop as the vice chair. The board’s nominating committee elected the officers during the board’s organizational meeting Aug. 12. Buckner is the first African American to chair the IU Board of Trustees.

One of IU’s most recognized alumni, Buckner has served on the board since his appointment in 2016. He is the vice president of communications for Pacers Sports and Entertainment and is a longtime professional basketball television analyst. Buckner earned a bachelor’s in business from the IU Kelley School of Business. A member of the National Collegiate Basketball Hall of Fame, he was part of IU’s undefeated 1976 men’s basketball team, captained the U.S. men’s Olympic basketball team that won the 1976 gold medal, won an NBA championship during a 10-year professional career and was head coach of the Dallas Mavericks. He is on several not-for-profit boards, including the IU Foundation, the Pacers Foundation, the Indiana Youth Institute and Special Olympics of Indiana.

First elected to the trustees in 2010, Bishop has long been an advocate for IU and its causes. A partner at Cohen Gerelick & Glazier in Indianapolis, she earned a bachelor’s in business from the IU Kelley School of Business and a J.D. from the IU McKinney School of Law at IUPUI. Bishop chaired the IU Alumni Association from 2007 to 2008, and has served on the IU Athletics Committee, the McKinney School of Law Board of Visitors and the steering committee of the Colloquium for Women of IU. She also is a member of the board of the IU Foundation and its Women’s Philanthropy Leadership Council.

“I am grateful to have two such longtime stewards of Indiana University leading the board,” IU President Pamela Whitten said. “Their election to these roles reflects their experience and dedication to this university, and it is an honor to work with them to shape the future of the university.”

The chair of the board presides over all trustees meetings, names and identifies the duties and responsibilities of all board committees, and fills committee vacancies. The vice chair performs duties of the chair in the chair’s absence. Officers serve for two-year terms.

“I am most familiar with the dynamics of a team,” Buckner told the trustees. “We’re all better when we do what we’re responsible for. So let’s all work together to ensure IU’s success.”

“I’m honored to serve in a leadership role on the board,” Bishop said. “I’m happy to join my colleagues in moving Indiana University forward and continuing the strong tradition of our trustee work.”

Of the nine members of the IU Board of Trustees, three are elected by IU graduates and six are appointed by the governor. All trustees serve three-year terms, with the exception of the student trustee, who serves a two-year term. Currently, there is a vacancy on the board following the passing of trustee Melanie S. Walker earlier this month. The governor will announce a new trustee appointment at a later date.