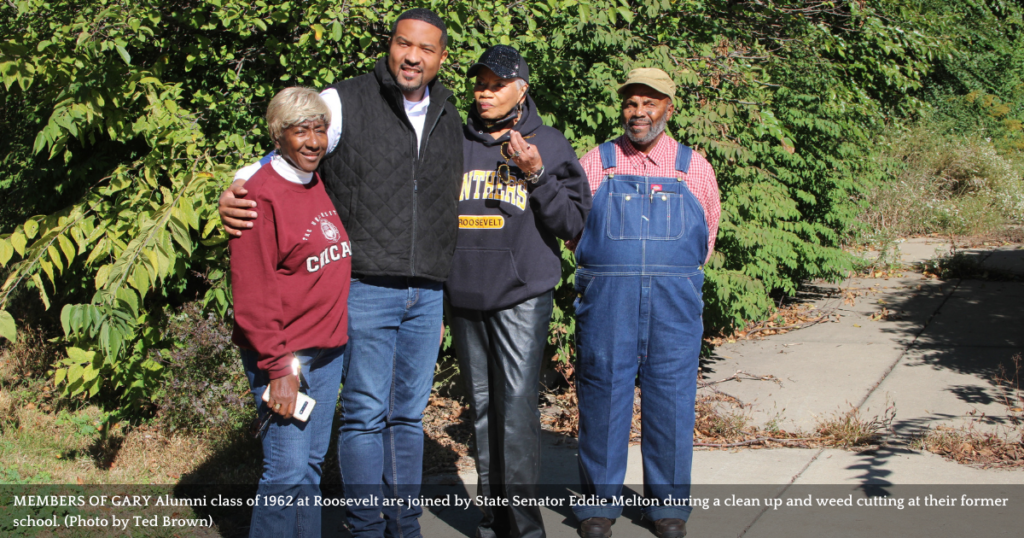 Our school shouldn’t look this, David Bullock said Monday morning, pointing to a parking lot overtaken by weeds at Gary’s Roosevelt High School. Along a walkway to the building’s entrance, weeds and overgrown brush hid the door, nearly reaching the 2nd floor.

But Bullock had a smile on his face. This was the first day of a cleanup effort at Roosevelt after numerous requests seeking permission from the Gary Community School Corporation to clean up the grounds had failed.

After all, Bullock said, Roosevelt was placed on the U.S. Department of the Interior’s National Registry of Historical Places in 2012 and the school received the State of Indiana’s Historical Marker in 2019.

Bullock and fellow classmate Glenn Trammell are members of The National Gary Theodore Roosevelt Alumni Association and have taken the lead to beautify the school grounds. The front parking lot is their first project. Next will be the area around the sports field.

“We’re going to save what we can. We’re going to keep the plants. Bushes and evergreens will be trimmed.” said Trammell. The planters will be cleared. Monday, weeds in the parking lot and along its fencing were being removed.

The alumni association is bearing the costs for landscaping cleanup, that means the maintenance crew and the dumpster that will haul away the debris.

Although the Gary school district has cut the lawns, it hasn’t touched the foliage. That’s why the alumni association volunteered to do it. And that wasn’t easy.

“We’ve been asking to help clean the grounds since Dr. Pete Morikus was the emergency manager. But we could never get a response,” said Judy Leek Mead, president of the alumni association. Dr. Morikus was emergency manager from 2018-2020. He was replaced by Dr. Paige McNulty just as the Covid-19 pandemic hit in February, 2020.

This year they asked State Senator Eddie Melton for help.

“I put in a call to the state,” Sen. Melton said. “’I didn’t see why a group of alumni who wanted to contribute and volunteer in their own community … why wouldn’t they be allowed to do that. It was an issue of the district not letting them on the grounds.”

“If you’ve got skilled professionals and individuals who know how to cut trees back and beautify a neighborhood, why wouldn’t we let them do it. The Distressed Unit Appeal Board confirmed it wouldn’t be a problem at all to allow volunteers to come on if they signed a waiver. Roosevelt has too much history for it to be let go,” Sen. Melton said.

The school district will supply the cleanup crews with bags and gloves.

The alumni association also wants the track opened up for the community to use for walking, like at other schools.

How long will the clean up last, they were asked. “We planned to be out here for a week,” said Bullock, “and we’ll be out here as long as it takes.” “I don’t have a job. This is my exercise,” Trammell said.

Roosevelt never reopened after the January 2019 polar vortex led to a heating system failure. Students were housed at the Gary Career Center. The district determined it didn’t have the funds to repair the school.

Since its closing, the alumni association has pursued purchasing the building and pushing for its maintenance and security.