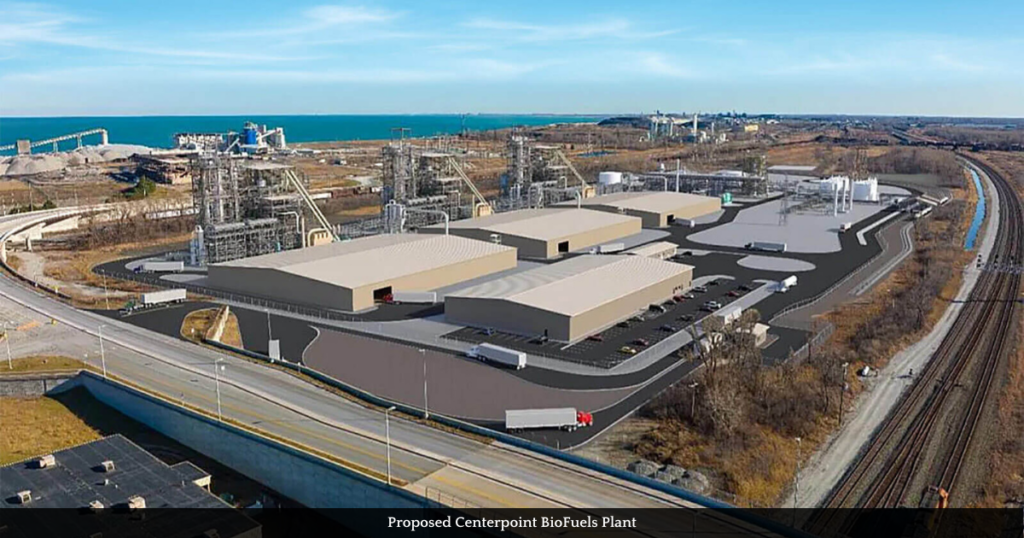 With updates coming in trickles on the progress of the nation’s largest waste-to-fuel plant slated for Gary, opponents are taking steps to make sure the facility won’t open until its questions are answered.

GARD (Gary Advocates for Responsible Development), a group of Gary and northwest Indiana residents maintain the plant will bring more air pollution to a region and its residents already burdened with dangerous levels of pollutants.

Since its initial announcement in December 2018, Fulcrum BioEnergy has spent the last 4 years securing financing and gaining regulatory approval for its proposed Fulcrum Centerpoint plant in Gary’s Buffington Harbor.

The proposed $600 million facility to convert household trash into jet fuel achieved one of its regulatory milestones in August when the Indiana Dept. of Environmental Management issued the plant a Clean Air Act permit. That permit gave Fulcrum the go-ahead to begin construction on the Centerpoint facility.

The next month GARD filed a petition with the Indiana Office of Environmental Adjudication asking for a review of the permitting process, claiming IDEM and Fulcrum violated Indiana law.

At GARD’s December 15, 2022 morning press conference, spokesperson Kimmie Gordon announced an amendment to that petition would be filed the next day, Friday, December 16. GARD has gained an ally in Chicago’s Environmental Law & Policy Center, a law firm that helps communities in the Midwest tackle land, air, and water use issues.

“Fulcrum never properly identifies the composition of the feedstock that it uses,” Carey said. “The Fulcrum application never defines exactly what materials will make up the 1,650 tons of processed garbage that it will use per day at the plant.” By not identifying the exact composition of the feedstock, GARD says, “it will be impossible for IDEM to calculate and verify the plant’s emissions.”

Fulcrum’s application didn’t show the basis for its emission calculations, Carey said. “Instead, it offered emission projections based on incomplete or unsupported guarantees from a set of potential vendors without indicating which of those manufacturers, if any, it actually plans to use.”

Fulcrum’s Centerpoint air permit application touts its process as having been “tested, demonstrated, and validated,” Carey continued. “The application, however, only identifies a single “demonstration unit,” apparently small enough to fit inside a school gymnasium, which Fulcrum operated for 120 days. It’s only experience with a similar facility is at its Sierra plant outside of Reno, Nevada, completed in July 2021 and still not fully operational. In short, Fulcrum’s permit relies on lab-tested technology to support the construction of an enormous commercial scale facility in Gary, Indiana.”

The Centerpoint facility is planned to be 3 times larger than the Reno plant.

A statement from Fulcrum’s Flyn Van Ewijk, Director Project Development, that 100 tons of Chicago area trash was transported to and then tested at the Sierra BioFuels plant was proof there was very little difference between trash from the Midwest and trash in Nevada.

GARD isn’t satisfied with that. “We want to see a processing plant from here processing garbage from someplace we know about here; then meet the specifications,” Carey said. “And as time goes along, they have to continue to prove that.”

What IDEM also did not do, GARD says, “… was satisfy its obligations to adequately consider and protect public health. It failed to conduct any analysis on the potential health effects of what is essentially a garbage burning plant.”

Garbage will not be burned at the Gary plant. Fulcrum plans to construct 2 processing facilities, a plant in Indiana outside of Gary and one in Illinois.

According to the Fulcrum website, “Instead of going to the landfill, household garbage is redirected to the feedstock processing facilities, where metals and other inorganic materials are separated from organic waste and recycled or disposed of at the landfill. The processing system then sizes, sorts, processes and dries the organic waste, producing a light “confetti-like” feedstock that will be transported by truck to Gary’s biorefinery.”

The Buffington Harbor location is on Gary’s western edge, bordering East Chicago’s Sunnyside and Prairie Park neighborhoods. GARD said more than 28,000 people, 92 percent are Black and Latino, live within a three-mile radius of the proposed plant. The U.S. Environmental Protection Agency, GARD says, has designated the area as having some of the highest levels in the state for various pollutants and illnesses. “People living in these already heavily industrialized communities suffer from high rates of cancer, asthma, lead exposure, and poverty.”

OEA set September 13, 2023 for a hearing on GARD’s request for a review of IDEM’s permit issuance to Fulcrum.