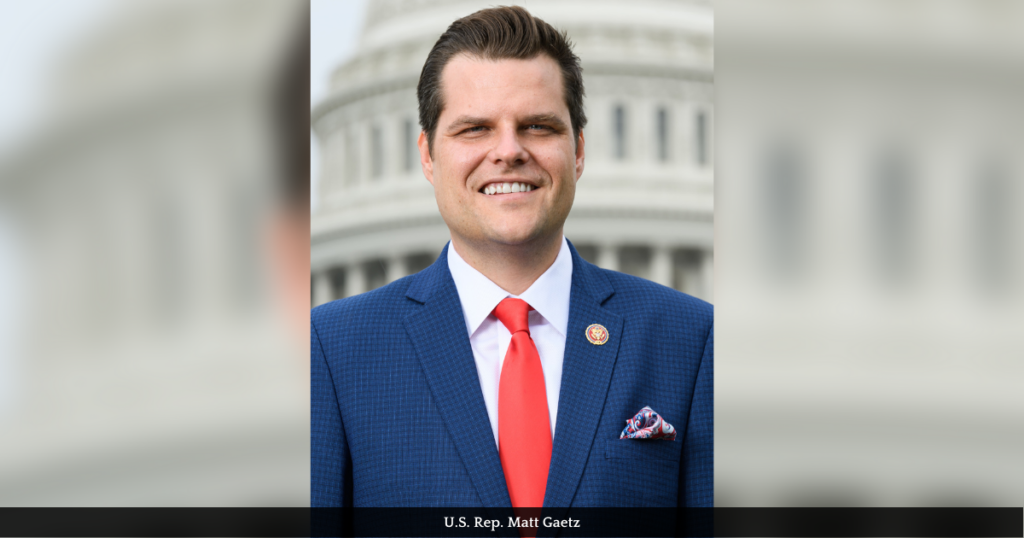 By Bethany Blankley, The Center Square

U.S. Rep. Matt Gaetz, R-Florida, was among 20 House members withholding support from new Speaker Kevin McCarthy until the California Republican would commit to bringing seven bills to a vote, as well as agreeing to other concessions.

McCarthy, who was elected after 15 rounds of voting, is ranked the second-most politically left member among House Republicans, according to a govtrack.us 2020 analysis.

McCarthy agreed to a list of concessions made by conservative members of the Freedom Caucus, including Gaetz, who tweeted, “this is what we’ve been fighting for.”

The seven bills include one that would rescind funding for “certain balances made available to the Internal Revenue Service,” including the administration’s plan to hire 87,000 IRS agents to expand tax audits of Americans.

Two bills relate abortion: one would prohibit taxpayer-funded abortions; the other would amend Title 18 of U.S. Code to provide safeguards for children who survive abortions or attempted abortions.

Two commit to border security measures: to suspend the illegal “entry of aliens” and require the national criminal background check system to notify U.S. Immigration and Customs Enforcement and relevant state and local agencies whenever an illegal foreign national attempts to receive a firearm.

Another bill would prohibit the Secretary of Energy from sending petroleum products from the Strategic Petroleum Reserve to China. Another would amend the Omnibus Crime Control and Safe Streets Act to direct district attorney and prosecutors’ offices to report to the U.S. Attorney General’s office.

Among the concessions agreed to, negotiated by Rep. Chip Roy, R-Texas, include capping spending at 2022 levels for fiscal 2024, establishing a subcommittee to investigate the Justice Department, allowing more Freedom Caucus representatives on the Rules Committee, and returning to a one-member threshold for a motion to vacate the speaker’s office, which is what it was before 2019.

Another concession includes the ability for any member of any party to offer amendments on the floor during appropriations, which Congress hasn’t done since May 2016.

Roy said he also demanded that members of Congress have at least 72 hours to read bills before they are voted on instead of bills being “rammed through the Rules Committee and sent to the floor,” where they are expected to pass them without knowing what’s in them.

Roy told CNN that what the 20 holdouts were able to accomplish was “history, because this hasn’t happened in the last 100 years.”

McCarthy’s election was the 15th time it took multiple votes to elect a speaker of the House, with the most contentious taking 133 votes over two months.

According to Conservative Review, McCarthy earned an F grade for his voting record, which over the last six years shows a history of supporting unlimited spending of taxpayer money, increasing the debt ceiling, voting against funding border security measures, and voting for amnesty for illegal foreign nationals.

The analysis evaluated key votes over the last six years, identifying 24 to give him a failing grade.

According to CR’s analysis, in 2022, McCarthy voted for the NDAA without requiring the Department of Defense to rescind its COVID-19 vaccine mandate; voted to fund an initial $40 billion in aid to Ukraine without accountability for how the money is spent or stipulations that Ukraine pay it back. He has since voted to send an additional $45 billion to Ukraine while also cutting funding for U.S. border security. He also voted to pass a $1.5 trillion Omnibus bill “funding Biden’s vaccine mandates,” and voted to bail out the U.S. Postal Service and “stick Medicare with the bill,” CR notes.

In 2020, McCarthy voted for $1.4 trillion in special interest spending in a “so-called COVID relief bill;” to pass the NDAA without Section 230 reforms; and for the “‘gag and vote for it’ small-business-killing coronavirus emergency legislation.”

In 2019, McCarthy voted to pass a $555 billion “Christmas minibus spending spree;” to suspend the debt ceiling, cancel budget caps and increase spending by $321 billion.  to pass a $19 billion spending bill without funding border security and, according to Conservative Review, to “surrender on the border wall; empower drug cartels and human traffickers;” and to “reduce accountability in Congress by making federal pay mandatory spending.”