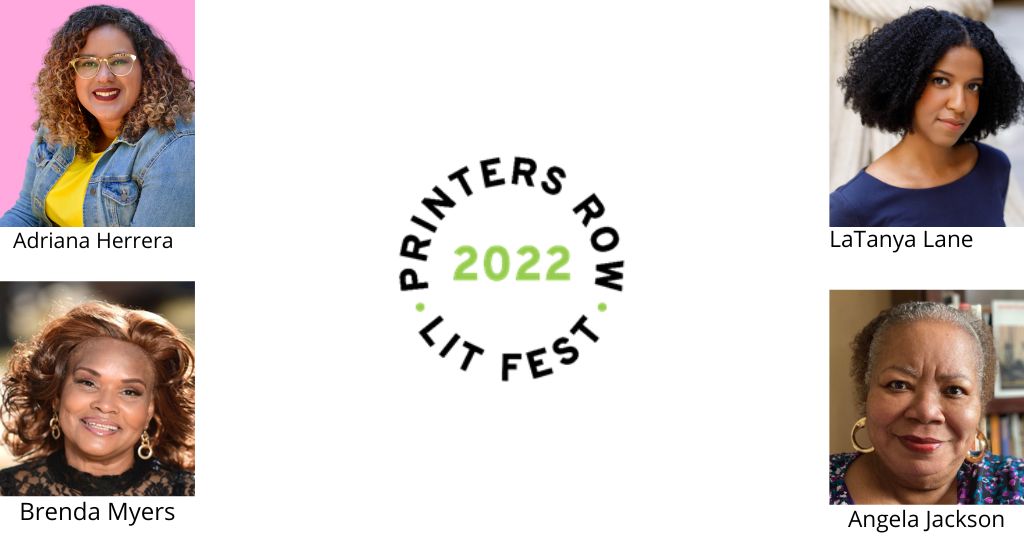 This year’s festival highlights Chicago stories and offers fun for all ages, with a poetry tent organized by The Poetry Foundation; a rare presentation from satire writers at The Onion; interactive programs for youth and families; and more

The 37th annual Printers Row Lit Fest, presented by the Near South Planning Board, is pleased to announce the full schedule of participating authors and programs. Printers Row Lit Fest is one of the three largest and oldest literary festivals in the U.S. and stretches across five blocks, along South Dearborn Street from Ida B. Wells Drive to Polk Street and on Polk Street from State to Clark, in Chicago’s historic Printers Row neighborhood. The outdoor event is accessible via public transportation and takes place rain or shine from Saturday – Sunday, September 10 – 11, from 10:00 a.m. – 6:00 p.m.

The festival kicks off with Evanston-based Pulitzer Prize winner and two-term United States Poet Laureate Natasha Trethewey, who will be awarded with this year’s prestigious Harold Washington Literary Award. Chicago authors and stories will be presented during the Printers Row Lit Fest including dozens of new books and anthologies focused on Chicago. From columnist Neil Steinberg’s Every Goddamn Day: A Highly Selective, Definitely Opinionated, and Alternatingly Humorous and Heartbreaking Historical Tour of Chicago and Ray Long’s The House that Madigan Built: The Record Run of Illinois’ Velvet Hammer to fictions set in Chicago neighborhoods such as Toya Wolfe’s Last Summer on State Street, Joe Meno’s Book of Extraordinary Tragedies, and One Book One Chicago author Eric Charles May’s Bedrock Faith, Chicago is a leading character in today’s literary zeitgeist.

Printers Row Lit Fest’s dynamic lineup offers fun for book lovers of all kinds, from poetry and romance to satire and spoken word. Highlights of this year’s festival include a conversation with Danyel Smith, the first Black editor of Billboard magazine, on her recent book Shine Bright: A Very Personal History of Black Women in Pop; Jamie Ford discussing his current New York Times bestseller The Many Daughters of Afong May; and celebrated author of The Evening Hero, Marie Myung-OK Lee.

New to this year’s festival is a dedicated poetry tent curated by The Poetry Foundation with a lineup of award-winning and emerging poets. Also new to the festival is the laugh-out-loud Literary Death Match, which pits four local authors against each other in front of a panel of all-star judges, and the Chicago-based, national satirical news site The Onion will present a rare, behind-the-scenes look at the article production process of “America’s Finest News Source” with a post-apocalyptic twist. Visitors can participate in a spoken word workshop and open mic led by EmceeSkool, and The Moth will showcase recent winners from their popular StorySLAM live storytelling competition.

The Printers Row Lit Fest will present powerful voices in social and environmental justice and activism with a series of panels hosted by reporters from Chicago Sun-Times and personalities from WBEZ. The fest includes a timely discussion reflecting on two years of the COVID-19 pandemic with a conversation between Dr. David Ansell, author of The Death Gap: How Inequality Kills, and Dr. Thomas Fisher, author of The Emergency: A Year of Healing and Heartbreak in a Chicago E.R. In addition, the Chicago Public Library will host Voices for Justice: Natalie Moore’s “The Billboard” including a staged reading of excerpts from the award-winning play.

This year marks the return of children and family-focused programming at Printers Row Lit Fest. Programs include Theatre on the Hill’s Choose Your Own Once Upon a Time, an opportunity for children to decide the fates of their favorite fairy tale characters in a live, interactive theatrical event, and Carlos Theatre Productions which will present a Latin American puppet show for children in Spanish and English. Parents can hear Dr. Dana Suskind in conversation with former Chicago Tribune columnist Heidi Stevens about her recent book Parent Nation: Unlocking Every Child’s Potential, Fulfilling Society’s Promise.

Program Director Amy Danzer, assistant director of graduate programs at Northwestern University School of Professional Studies and Board President of the Chicago Literary Hall of Fame.

Including Sandmeyer’s Books and The Book Cellar, Printers Row Lit Fest hosts over 100 booksellers in airy outdoor tents, inviting visitors to peacefully peruse everything from the rare to ‘hot off the press,’ newly published works. All programming, including feature presentations by myriad authors, spoken word artists, journalists, comedians, and poets, is 100% free of charge.

731 S. Plymouth Ct. – The Deep Creativity of Translation: A Reading and Discussion with Izidora Angel, Mary Hawley, and Alta L. Price. Moderated by Irina Ruvinsky. Presented by Another Chicago Magazine and the Third Coast Translators Collective.

Center Stage – Erika L. Sanchez, Crying in the Bathroom: A Memoir in conversation with Juan Martinez

731 S. Plymouth Ct. – Deborah Cohen, Last Call at the Hotel Imperial: The Reporters Who Took On a World at War in conversation with Peter Slevin

731 S. Plymouth Ct. – Dr. David Ansell, The Death Gap: How Inequality Kills and Dr. Thomas Fisher, The Emergency: A Year of Healing and Heartbreak in a Chicago ER with Katherine Davis, Crain’s

Grace Place (2nd Floor) – Elizabeth Crane, This Story Will Change: After the Happily Ever After with Kim Brooks

731 S. Plymouth Ct. – Kori Rumore and Marianne Mather (authors of), and Rick Kogan (prelude to) He Had It Coming: Four Murderous Women and the Reporter Who Immortalized Their Stories with Mary Wisniewski

Main Stage – Jamie Ford, The Many Daughters of Afong Moy in conversation with Carey Cranston, President of the American Writers Museum

731 S. Plymouth Ct. – Victor Ray, On Critical Race Theory: Why It Matters & Why You Should Care with Cassandra West, Crain’s

731 S. Plymouth Ct. – Kevin Boyle, The Shattering: America in the 1960s in conversation with Elizabeth Taylor

731 S. Plymouth Ct. – The Insidiousness of Hatred – Adam Langer, Cyclorama and Jerry Stahl, Nein, Nein, Nein!: One Man’s Tale of Depression, Psychic Torment, and a Bus Tour of the Holocaust in conversation with Ben Tanzer

Center Stage – The Crisis in American Democracy – Dick Simpson, Democracy’s Rebirth: The View from Chicago and Michael Dorf, Clear It with Sid!: Sidney R. Yates and Fifty Years of Presidents, Pragmatism, and Public Service with Gerry Plecki, President of The Society of Midland Authors

Many of the fest’s nonfiction panels will be recorded by C-SPAN.

Printers Row Lit Fest will follow CDC, state, and city recommendations for the health and safety of all attendees and participants. Masks will be required in all indoor spaces.

Near South Planning Board (NSPB) founded the Printers Row Lit Fest in 1985. NSPB is a not-for-profit community-based organization, serving businesses, institutions, and property owners of the Near South Side of Chicago since 1946.

More information about the Printers Row Lit Fest can be found at https://printersrowlitfest.org.