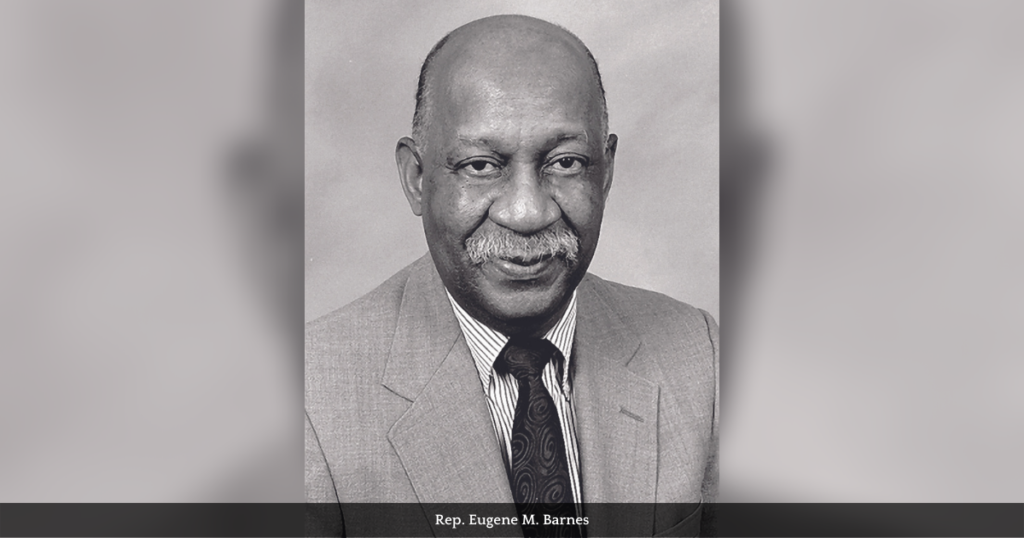 A Chicago south side native and former IL State Representative Eugene Morice Barnes passed away on November 13, 2022; he was 91 years old. Barnes was elected to four terms, serving the people of the State of Illinois.

During his tenure, his work on behalf of Illinois families earned him much recognition, including Outstanding Legislator Award and co-sponsor of the first Illinois Lottery legislation. Under the guidance of the late U.S. Rep. Ralph Metcalfe, he won a coveted and powerful leadership position as chairman of the Illinois House of Representatives Appropriations II Committee. Barnes became one of the original founders of the Illinois Legislative Black Caucus, the model upon which the Congressional Black Caucus is based.

As chair of the Appropriations II Committee, he led efforts to secure funding for the original buildings at Chicago State University’s campus on 95th and Martin Luther King Drive. He also secured funding for the university’s library holdings. This support earned him special recognition from the Illinois Library Association and the Chicago Public Library, which dedicated historical volumes to him that were placed in a section of the Carter G. Woodson Regional Library Branch in his name.

Barnes served on several boards and committees, earning him numerous awards for excellence in the performance of his duties. He championed education and health initiatives. He authored legislation requiring medical students who received state scholarships to work in medically underserved communities upon graduation. He awarded numerous legislative scholarships to students pursuing medical careers: one famous scholarship recipient was Terry Mason, MD, the former City of Chicago Commissioner of Public Health. He also served as past precinct captain of the 34th Ward and 21st Ward Regular Democratic Organizations.

In 1979, Barnes resigned his Illinois House seat to accept appointment as the first Black CTA board chairman and later became elected chair of the American Public Transportation Association. He later became an administrative assistant to his former Illinois House colleague, the late Mayor Harold Washington. His background as chair of the Appropriations II Committee stood him in good stead as a legislative fiscal analyst for the Chicago City Council Finance Committee. He was appointed commissioner of the Department of Sewers in 1983 by Mayor Washington.

After his government service, Barnes joined the Springfield firm of Cook-Witter Inc. as a lobbyist, a position he held for many years until establishing his own lobbyist firm, E.M. Barnes & Associates. He also served as a member of the Illinois Pension Laws Commission. He counted the CTA, Chicago State University, and Cook County government among his clients.

Born in Chicago on July 24, 1931, Barnes graduated from Wendell Phillips High School: the actress Marla Gibbs was one of his classmates. He joined the US Air Force as a private, serving during the Korean Conflict. During his service he earned a Certificate of Accounting from the U.S. Air Force Specialist School. He had earned the rank of Sergeant when he was honorably discharged from military service. Afterwards he met and married Melody Lei-Lani Roach. They were married 42 years upon her transition in 2000. They had three children.

Theirs was a life of love and devotion and service to people.